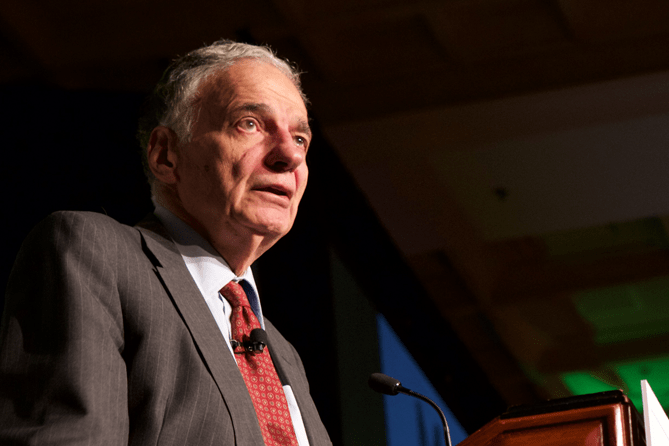 Former presidential candidate and consumer advocate Ralph Nader spoke at the Marijuana Business Conference and Expo in Las Vegas last November, where he received a standing ovation. Nader sat down with Marijuana Business Magazine just before the event to discuss his views on legalization and the cannabis industry at large. Here are excerpts of that conversation, edited for length and clarity.

How do you envision marijuana legalization playing out in this country going forward? Will the federal government legalize marijuana, reschedule it or take a different path?

I don’t think the federal government – be it Congress or the White House – will make a big move. I think they will watch developments in the states and procrastinate if they can.

I think it’s too much of a hot potato issue and is already splitting the public. If 20-30 states move toward (recreational) legalization there will be more pressure on Washington, but I don’t think that will happen in the next two or three years. If they haven’t moved even on industrial hemp, with all its support from both Democrats and Republicans, you can be sure they will not move on marijuana. This is way down their list, especially if they can pawn it off on states.

What’s your top piece of advice for businesses in this emerging market?

For individual businesses I think they have to try to police their ranks. The idea of trying to sell a marijuana product that looks like traditional candy is (worrisome). It’s something that needs to be very carefully monitored.

In any industry you have responsible businesses, businesses that are neutral, and businesses trying to get away with something. Whenever you have a fledging industry underway you have to rely more on responsible companies to lead. If they see that a company is committing a serious violation, they need to report them.

You’ve built a reputation as a champion of consumers. What is the biggest problem you see on that end in corporate America today, and how can cannabis businesses avoid repeating that mistake?

Your most important focus has to be on the consumer. That’s job number one, and many companies fail in this regard.

In this industry, because of its past and because it is decentralized in a way, we see a lot of bad situations. Some of them are completely out of the control of sellers, but sellers will be blamed for it. Or bad companies will be blamed, but the good ones will take the reputational rap.

This industry needs a strong code of conduct, but it doesn’t have a strong trade association at this time to develop it. The strength of a trade association is the ability to develop a code of conduct for members, but in fact also for all sellers even if they don’t belong to the organization. Cannabis businesses might have to do it by creating a sort of Better Business Bureau, so consumers can trust labels. But then the question is which businesses will start and run the organization?

This problem is understandable because everything in the industry is very early and a lot of things aren’t settled, but businesses really need to start talking about it.

Attitudes toward marijuana have changed very rapidly in this country, much like gay marriage. What do you attribute this to?

I think there are at least three reasons. The younger generation is more favorably disposed to it. Secondly, there’s been a rebellion on long prison sentences for it. Companies ensure executives don’t get prosecuted (for all their misdeeds that hurt large numbers of people), but someone gets caught with a joint and goes to jail? There’s a lot of outrage about that.

What do you see as the biggest impediment to the marijuana industry’s success?

Tainted products and unscrupulous players, which usually go together. The second one revolves around research. There’s a lot more research on tobacco than marijuana, and the tobacco industry started to implode when it tried to block research. Marijuana businesses have to be very open about this, even if the results are negative for the industry.