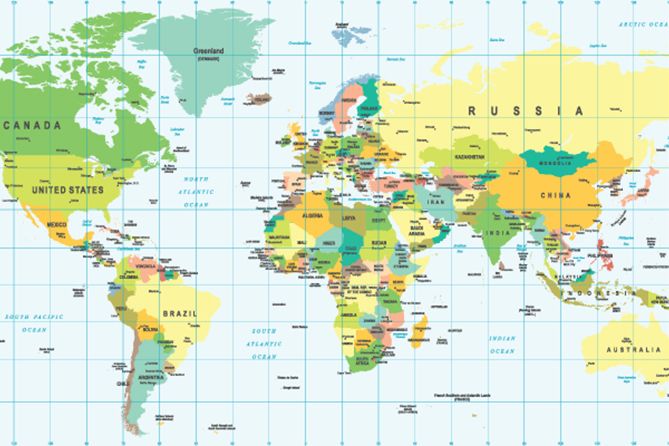 By Omar Sacirbey and Matt Lamers

The international legal marijuana business landscape has blossomed from a handful of countries a few years ago to more than two dozen today. Legalized medical cannabis can be found in at least one country on every habitable continent.

The opportunities abroad, however, are significantly different than those in the United States. Most important, these are federal markets where marijuana businesses don’t have to worry about government interference or discriminatory practices like the 280E tax provision.

And because they are federally legal, some of these international markets allow exports and imports of medical cannabis products, opening a tremendous market opportunity that U.S. businesses confined to legal state markets can only imagine.

Many of these international markets are more focused on scientific and medical research into cannabis than what’s been possible in the United States, opening additional opportunities for studies that could help advance the industry.

But this emphasis on medicine also translates, in many cases, into only limited retail opportunities in international cannabis. That’s because products are frequently sold through pharmacies, not dispensaries – although there are a handful of exceptions.

In many of these markets, the best opportunities are in the manufacturing and processing sectors, which need expertise in extraction, concentrates and infused products. The ancillary sector also should offer opportunities.

Marijuana Business Magazine looked at opportunities in 10 of the most interesting international marijuana markets and summarized their opportunities and challenges in the following country market profiles. To be sure, there are many more interesting markets to consider, but this list offers a glimpse of what’s possible.

Since going online in October 2016, Australia’s medical marijuana market has grown slowly, primarily because of heavy government regulations that have undermined patient access and hampered MMJ businesses hoping to start there.

Consequently, Australia has issued only 14 cultivation and production licenses, eight manufacturing licenses and eight research licenses. But many of these businesses are not yet operational and are awaiting clinical trials and build-outs. Also, Australia requires that medical cannabis be sold through pharmacies, eliminating the retail option for entrepreneurs.

But Australia’s government plans to allow medical cannabis exports, a development that would dramatically increase the value of the country’s cultivation and manufacturing licenses.

Cultivation and manufacturing companies able to win licenses will have access to a significant domestic patient market (once patient access issues are resolved) as well as a growing number of foreign medical marijuana markets that allow imported cannabis.

So, how to break in? Several Canadian players, and even some from the United States, have done so through joint ventures – or have partnered with or invested in Australian cannabis businesses:

Canada’s federally regulated medical marijuana industry has been in a perpetual boom since the country elected a cannabis-friendly prime minister in 2015. Since then, the number of registered MMJ patients and licensed producers has more than tripled to 270,000 and 97, respectively, as of March.

Now the country is poised to become the first Group of Seven nation to legalize recreational marijuana. With an expected recreational market worth $5.5 billion (CA$7 billion), Canada’s domestic market would be the second largest in the world, behind California.

Inbound international cultivation opportunities could come in the form of partnerships and suppliers to the current licensed producers and the hundreds of applicants awaiting government approval.

U.S. businesses with experience selling, branding or producing recreational cannabis products – such as vape oils and infused products – could find room to grow in Canada or partner with Canadian businesses that have little experience in these areas (especially because edibles will be allowed by the summer of 2019).

Canada is also a staging ground for international expansion. Leveraging Canadian capital and experience operating in a tightly controlled federal market, companies have used Canada to expand into more than a dozen overseas medical markets.

Chile is a trailblazer in Latin America when it comes to medical marijuana.

In 2015, the country legalized MMJ and decriminalized small amounts of recreational cannabis. Soon after, Chile approved the first medical cannabis grow operation in Latin America. Then, in 2017, drugstores in Chile’s capital, Santiago, started sales of MMJ, marking the first time it was available at pharmacies in Latin America.

Although Chile has been slow to license MMJ cultivation and enact follow-up regulations, recent trends are promising for entrepreneurs.

Since Colombian President Juan Manuel Santos signed medical marijuana legislation in 2015, the country’s MMJ industry has developed rapidly and is considered ripe for business, with opportunities for overseas entrepreneurs in the cultivation, manufacturing and ancillary sectors, such as consulting, legal and security. However, retail offers fewer business opportunities because products are sold through pharmacies.

Colombia is positioned to become a global leader in cannabis production, serving both domestic and international markets. Chalk it up to a supportive federal government and low labor costs. Also, a temperate climate and 12 hours of both light and darkness make the country suitable for outdoor cultivation.

“I see Colombia becoming the next major producer in the next four or five years – to supply the world, as long as they get quality control under control,” said Deepak Anand, a Vancouver, British Colombia-based consultant for Canadian and U.S. companies.

Another attractive market feature is the easy access to non-psychoactive MMJ products – defined in Colombia as below 1% THC – which can be sold over the counter in pharmacies.

The country, however, prohibits flower sales and requires that MMJ products be sold only as extracts made in specially certified labs. This requirement creates an opening for manufacturers.

Here’s how the licensing process works:

Germany is on track to become one of the world’s largest medical marijuana markets. Patient numbers are soaring, medical cannabis imports are rising, and the country is preparing for domestic cultivation. Some executives expect recreational legalization to happen “in the foreseeable future.”

In a country where residents are required to have health insurance, some plans cover medical cannabis, making access easier for the country’s 70 million eligible residents. Early data from three of the country’s largest insurance companies show medical marijuana demand is surging.

Germany has what it takes to support a major domestic cultivation industry. Those efforts suffered a setback in March, however, when a German court scrapped the licensing process. Applicants hoped the first licenses would be awarded in April 2018. Now, the entire process may not resume until late this year, and cultivation likely won’t begin until 2019 or 2020.

Ever since Hebrew University Professor Raphael Mechoulam became the first person to identify THC more than 40 years ago, Israel has been a trailblazer in medical marijuana research and cultivation science.

But in terms of medical marijuana business opportunities, Israel has been somewhat of a disappointment for North American entrepreneurs. Despite medical marijuana’s social acceptability in Israel, the country’s program includes a modest 30,000 patients who get their product from pharmacies and a handful of dispensaries supplied by eight licensed growers.

Israel approved cannabis exports in August 2017, and more than 500 growers applied for cultivation and export permission. But in February, the government suspended the plan, leaving several companies and investors facing significant financial losses.

Still, export supporters continue to push, and it’s possible the government will permit exports this year or next.

Of all the international medical marijuana markets already online, Jamaica could be the second-most attractive to U.S. entrepreneurs, behind only Canada. There are several business license categories, no license caps and rules that promote patient access.

Jamaica’s medical marijuana law allows both citizens with physician recommendations and tourists with such recommendations from their home countries to buy medical cannabis.

Businesses that apply for a license must establish their company’s “substantial” ownership and control (more than 50%) by a person considered “ordinarily resident” in Jamaica – someone who has lived in Jamaica for three consecutive years immediately preceding the date of the application and is at least 18 years old.

Here’s what you need to know about the licensing situation:

Several American companies have a presence in Jamaica, including Colorado-based Organa Brands, which provides vape pens, edibles and other infused goods and manufactures and sells products in Jamaica. Others include California-based Steep Hill Labs; Medically Correct, a Colorado-based infused product maker; and BioTrackTHC, a Florida-based seed-to-sale tracking company.

Lesotho in 2008 became the first country in Africa to regulate medical cannabis, but it wasn’t until the past couple of years that businesses started moving into the space. That’s because the regulatory infrastructure including the Lesotho Narcotics Bureau wasn’t launched until recently.

Currently, there are two companies cultivating medical marijuana for export and about six more possessing licenses.

While the 2008 law spells out who can prescribe medical cannabis and under what conditions, it lacks enough detail to make a domestic industry workable. The law was created with exports in mind. The pending Drugs of Abuse (Cannabis) Regulations may address such technical gaps to facilitate domestic MMJ use, but it could be months – or years – before the follow-up legislation is approved.

For now, the industry is focused on exports.

Opportunities exist up and down the value chain. There are no input suppliers specifically for cannabis companies, including general infrastructure such as irrigation equipment, greenhouse, generators, farming equipment, nutrients and cannabis-specific fertilizers.

International companies with a cultivation track record based on Good Manufacturing Practice (GMP) could find dance partners in one of Lesotho’s licensed producers that lack capital and know-how.

Portugal reflects both the potential and the relatively slow pace of business opportunities in the European Union.

On one hand, Portugal decriminalized cannabis in 2001, although home growing and illegal trafficking can still be prosecuted. Cannabis also enjoys broad social acceptance in Portugal. And the nation has one of the lowest-cost labor forces in Europe, so there is inexpensive local know-how.

However, Portugal has only recently begun to take steps to legalize medical marijuana, let alone make advances in developing an MMJ industry or move toward legalizing recreational cannabis.

What does that mean for business opportunities?

Tilray, the British Columbia producer owned by Seattle-based private equity firm Privateer Holdings, got its foot in the European Union door by establishing a wholly owned subsidiary in Cantanhede, Portugal.

Privateer chose this city in central Portugal because of its favorable outdoor growing climate and low-cost-but-skilled workforce. Privateer plans to make Tilray Portugal Unipessoal Lda, as the new venture is called, a cornerstone of its international strategy.

“Our campus in Portugal will serve as a hub supporting our cultivation, processing, research, packaging and export to other EU countries,” Privateer CEO Brendan Kennedy said last September at the time the company unveiled plans to build the $24 million facility.

The same approach could potentially work for extraction and manufacturing companies, but retail is a far less certain category for now.

Uruguay’s recreational cannabis market launched last year, but opportunities are limited for now. That may change, however, as the government considers revisions to the law.

The recreational marijuana law in this country of 3.4 million people allows for a small number of licensed commercial growers. But, so far, the government has approved only two: ICC Labs and Symbiosis. Both already are cultivating for a small customer base of slightly more than 22,000 people.

Retail offers potential opportunities. Here’s what you need to know about that sector:

But how will that new retail system function? Will the price per gram remain capped at $1.40? Whether it will leave the door open for international involvement remains to be seen, but if the sales centers are to be viable, the $1.40 price cap will have to go.

The only other opportunities may be in hemp cultivation, as several companies – including some with Canadian involvement – also obtained licenses to cultivate that plant.