The Penticton Indian Band, a First Nation community in Canada, may approve a plan to start growing medical marijuana on its lands in British Columbia.

If members sign off on the plan, Penticton Indian Band would become the first aboriginal group to become federally licensed to produce cannabis, and it could serve as a model for other First Nation communities across the country.

The band, which signed a letter of intent with cannabis producer Kaneh Bosm Biotechnology in September, would build a medicinal marijuana facility to grow a strain that caters to health conditions afflicting indigenous populations, according to the Canadian Press.

Many First Nations people who suffer from afflictions including arthritis and fibromyalgia could turn to medicinal cannabis because they are unable to afford costly prescription medications, marijuana supporters say.

The proposed $10 million facility will be rolled out in three phases and could create jobs for the Penticton Indian Band’s 900 members. Kaneh Bosm said it’s already been approached by First Nation bands in other provinces.

Resignation of Maryland MMJ Chief Could Cause Hiccups

Chart of the Week: Voter Support for Medical Marijuana in Florida vs. Other MMJ States 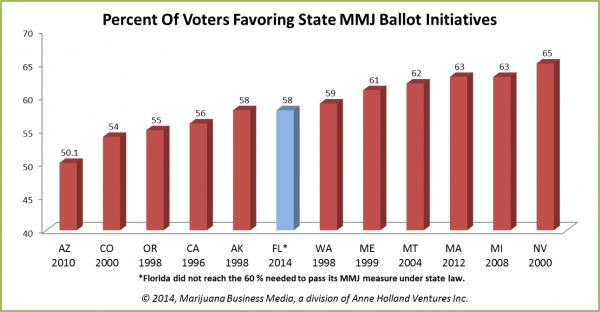