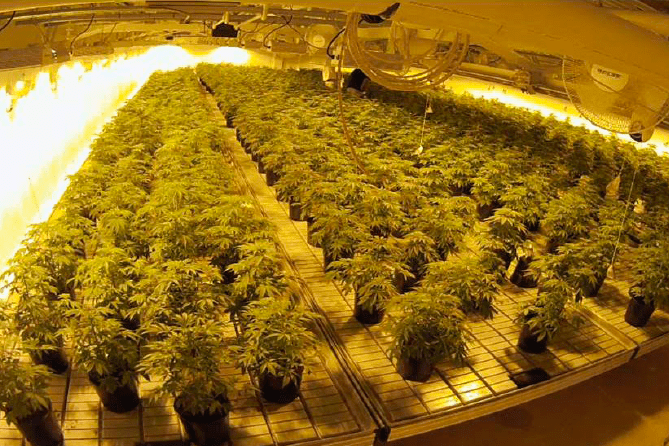 A cultivator can learn everything there is to know about seeds and soil, but creating an ideal environment around the plant is also crucial to growing top-notch cannabis and running a profitable business.

Shaw has been or is involved in cultivation projects in six states across the country and has been a grower for nearly two decades.

“If you have a good environment you’re going to have a successful grow. Too many times people will skimp on the environment, and it just leads to years of trouble,” said Shaw, who is also president of Green Matters, a hydroponics equipment supplier in Massachusetts. “If you take the design of your environment as seriously as you do your grow you’ll have a much more successful (business).”

What does Shaw mean by a “good environment?”

“It’s all about heat, humidity and what the quality of your air is,” Shaw said.

Here are some strategies Shaw has developed for creating an ideal cultivation environment.

Humidity: Beast of the East

The first consideration to take into account is location. The type of dehumidification and air flow systems best suited for a particular building will greatly depend on geography.

“It has a huge impact,” Shaw said.

The simple but major difference is humidity, which is much greater in the eastern part of the country than the western.

“If you’re out West, where it’s nice dry air, you can do a filtered air exchange and save some money,” Shaw said.

A filtered air exchange only requires heavy fans that blow out humid air in a grow site and replace it with dry air sucked in from the outside. Such a system is simpler and far less expensive – both in terms of equipment costs and electricity costs – than a system of dehumidifiers and air conditioners required in the much more humid eastern states. Shaw estimated that for every 10,000 square feet, a filtered exchange system is about $15,000 to $20,000 less expensive than a system of air conditioners and dehumidifiers, not including the cost of electricity, but just in equipment.

The importance of regulating humidity and air flow came into play for Shaw on the first major commercial project he was involved with, the Greenleaf Compassionate Center in New Jersey, which brought him on board to correct design errors at its cultivation site.

Shaw realized this was a problem.

During the first two or three hours after grow lights are turned off, the plants respire and release moisture into the air. That increases humidity in the room and raises the chance of mold, mildew and other issues.

Thus, dehumidifiers should be left on for a few hours after the grow room lights are turned off.

Shaw sold Greenleaf additional dehumidifiers and air conditioning units, and instructed that dehumidification continue for three hours after grow lights are turned off.

“Bud rot and powdery mildew are horrible situations to have to deal with,” Shaw said. “Air flow and dehumidification will be your best friend for preventing both of those issues.”

That can get expensive. Shaw estimates that a commercial dehumidifier costs about $1,500, and that each dehumidifier can suck out 180 pints of humidity per night. That translates into 56 dehumidifiers at a total cost of around $80,000-$90,000.

“You really have to take into account humidity and temperature. You always want to go with a few tons more than what you think you need in air conditioning, and many pints more than you need in dehumidification,” Shaw said.

Shaw likes to supplement the dehumidifiers with a five-ton air conditioning unit, which costs about $12,000, and outfit it with dehumidification equipment so that it can continue to dehumidify even when it is not cooling.

Despite the costs, Shaw said growers should see these as long-term investments that will pay immense dividends down the road by saving their crop.

Another important component of controlling the air flow in your cultivation site is the building you choose to have it in, and how you divide the interior.

Shaw prefers finding existing buildings that he can adjust rather than the much more expensive option of constructing a facility from scratch.

There is one kind of building he doesn’t like, however.

“You don’t want a big metal building, they heat up like a Coke can in the sun,” making the task of cooling and dehumidifying that much more difficult and expensive, he said.

Once he has secured a building, Shaw likes to build several rooms within the larger space. The key is to ensure none of the interior rooms have a wall that is also part of the larger building. By doing this, cultivators create rooms within rooms. Several of those rooms will be for the seedlings and younger plants, a few for mature plants, and a nursery room for mother plants that can be used for cloning.

“Those are the three atmospheres or environments you’re thinking about when you’re starting your design,” Shaw said.

Such a scheme makes crop management easier because you will have a new room to harvest every couple weeks. An even bigger benefit of having separate rooms within the facility is that it is easier to protect the plants from air in the larger facility.

“That works like a jacketed barrier to keep the outside air out so that it won’t mix with the room air,” Shaw said. “The ultimate battle is trying to make sure that your grow-room air space has the least amount of (exposure to) outside temperatures. Your ultimate goal, whether it’s 90 degrees or 30 degrees outside, should be able to have the same control inside your grow room.”

In other words, you want to be able to maintain a steady temperature and climate inside.

Shaw likes the rooms to range from about 700 to 1,200 square feet in size. For an added layer of protection, Shaw recommends using spray foam insulation.

Another reason for the small rooms is “redundancy,” Shaw said. If something goes wrong – an air conditioner dies, for example – it will only affect one room.

Since Shaw owns a hydroponics supply business, it shouldn’t come as a surprise that he’s partial to a hydroponic environment.

But the kind of equipment you need can vary greatly.

For example, at the First State Compassion Center in Delaware, Shaw set up an undercurrent system in which water enhanced with nutrient solutions flows underneath the plants, which are in 13-gallon square buckets that are connected with three-inch piping.

Because lights in a grow room can heat the water, Shaw also uses a cooling system that the water can flow through, so it won’t get too hot.

“After 73 degrees, you get into issues. You can get root rot very easily. Pathogens thrive in warm water, especially in oxygen-rich, nutrient-rich warm water,” Shaw said. “So now we can control the water temperature and keep it precisely at 69 degrees.”

At that temperature, plants can hold the maximum oxygen and more efficiently absorb nutrients, which is good for the plant but also reduces how much nutrient solution is necessary to mix into the water, thereby reducing costs.

At the Slater Center in Providence, Rhode Island, Shaw designed a system that combines the undercurrent method with “coco” – coconut fibers that are washed, PH buffered, and sold as a loose fiber. Coco, which has become popular in the last few years, looks like soil and gives plant roots something to attach to, but it’s still considered hydroponic. At the same time, the material excels both at aeration and moisture retention.

To feed plants in any of those hydroponic environments, Shaw uses products from Canna, combining a base solution with four mixes containing 15 additional nutrients.

“This creates a really happy and healthy grow environment for the plants,” Shaw said.

And if you’ve succeeded in optimizing the air in which your plants live and the foundation where the roots take hold, your final product will likely be optimal, too.