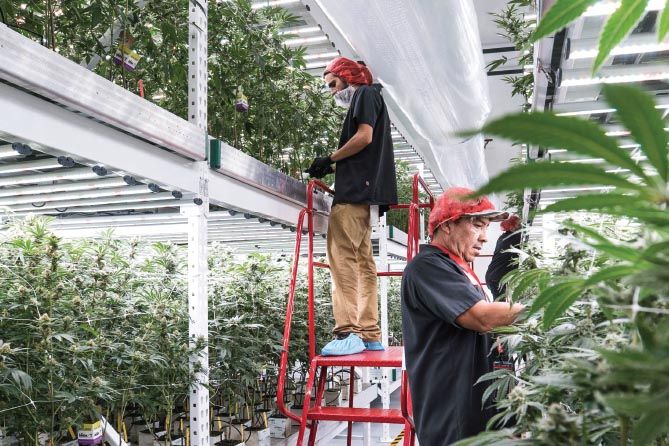 Light-emitting diodes, or LEDs, have been slowly making inroads with cannabis growers over the past few years.

As indoor cultivation operations have gotten bigger, and as the price of electricity has begun eroding growers’ bottom lines, many have begun looking to LEDs as a possible solution. The reason: LEDs are up to 40% more energy efficient – and thus cheaper to use – than their more traditional counterparts, such as high-pressure sodium (HPS) lights.

“It’s safe to say that LEDs are going to be the future of all indoor agriculture cultivation, whether it’s cannabis or some other crop,” said Damian Solomon, the head of cultivation for California-based MedMen.

While many cultivators, like MedMen, have converted completely to LEDs and don’t even consider other light fixtures, some growers remain wary, in part because of the high upfront costs. Growers often have to shell out three or four times as much money for LED technology vs. HPS systems.

Another reason LEDs haven’t boomed in popularity is because many growers didn’t do their due diligence before trying out the technology. As a result, LEDs have gotten somewhat of a bad rap, as plenty of growers have wasted thousands of dollars on inefficient lights that didn’t get them the increased plant yields they were expecting.

“The problem that has occurred is, you walk into a trade show or a light manufacturer tells you, ‘Just replace 1,000 watts with 600 watts, and it’s a one-for-one switchout,’” said Shelly Peterson, vice president of lighting technologies for Colorado-based Urban-Gro. “But what they’re failing to tell you is what the efficiency of that (LED) fixture is.”

Before spending perhaps tens of thousands of dollars on the technology, here are some steps you can take to ensure LEDs are right for your grow.

If your company is seriously considering investing in LEDs, you first need to learn as much as possible about the technology.

“Call those LED companies directly, and infiltrate as much as you can, because the amount of money you’re going to spend is not going to be something that you want to make a mistake on,” said one of the founders of Oregon-based Deschutes Growery, who asked to remain anonymous. “It’s a big financial decision.”

Deschutes Growery has committed at least $90,000 to converting its entire grow operation, but the company’s executives believe it’s absolutely worth it.

“You’re basically doubling your yield and shrinking your (energy) footprint at the same time,” the Deschutes Growery founder said.

To achieve a greater plant yield, however, growers need to understand that LEDs operate differently than more traditional forms of lighting technology such as HPS lights, said Peterson of Urban-Gro. Cultivators also need to know there are huge gaps in reliability between different LED brands.

MedMen uses LEDs from Fluence Bioengineering, and Deschutes Growery uses LEDs from Smart Grow Technologies, both prominent and respected brands. According to growers and consultants, other favored LED brands in the cannabis trade include Heliospectra, P.L. Light Systems, Lumitex and Black Dog LED.

It’s also important to run some numbers so you get an accurate read on how LEDs will affect your yields.

“The main thing with LED is the efficiency of the fixture. There’s been a lot of LEDs that have been sold out there that people say, ‘If you take this 1,000-watt HPS light down and hang up this 500- or 600-watt LED, your light levels are going to be the same and your yields are going to go up,’” Peterson explained. “That’s a very flawed argument, because you have to know what the efficiency of the light fixture is.”

The key factor to look for with LEDs, Peterson said, is the number of micromoles per watt, which measures the number of photons that are passing through an area of light.

“Just because it says LED does not automatically mean it is more efficient than an HPS,” Peterson noted.

As an example, say you purchase an LED that is 600 watts with an efficiency of 1.8 micromoles per watt.

That, in turn, will end up lowering a cultivation center’s overall yield, Peterson said.

“Without doing proper due diligence, you run the risk of yields decreasing,” she said.

Consider Your Budget and Business Plan

You also need to figure out how LEDs fit into your company’s budget and business plan. For example, LEDs may cost more out of pocket at the outset, but that expenditure could be made up in several ways.

Perhaps the most important issue to consider, according to Peterson, is how much per kilowatt hour the local utility company is charging for electricity. That alone could determine whether LEDs are worth the cost, she said.

“It’s more directly related to the kilowatt hour price. I’m seeing 11 cents to 15 cents is where that payback is starting to make sense. Anything cheaper than that and the ROI is just too long,” Peterson said.

If a grower is in the right market, however, the efficiency of LEDs can be a major boon. Medical marijuana licensees in Hawaii, for example, may want to look seriously at investing in LEDs because the cost of power is much higher than, say, in Arizona.

“We saved about half as much electricity on each fixture than if we were using a traditional form. But on top of that, they generate so low (a) temperature that we don’t have to use the same size air conditioners that you would if you used traditional lighting. So that’s where we really save a lot of lighting,” said Richard Vinal, chief operating officer of Hifi Farms in Oregon.

The company has been using LEDs for about two years, and over time it has phased out every other type of grow light.

On top of that, many cannabis markets – such as Oregon and Washington state – offer rebates to companies that invest in energy-efficient technology. That means state rebates or tax credits could seriously offset the upfront costs of LED fixtures.

One other important note: Because LEDs give off less heat, growers can move their plants physically closer to the lights, meaning they can cram more plants into a relatively small indoor grow. MedMen, for example, has installed vertical grow shelves in two of its cultivation operations. The plants are stacked on two layers of shelves to capitalize on as much vertical space as possible. The plants on each shelf, in turn, have a set of lights above them.

For a grower who’s already using HPS lights and is thinking about transferring to LEDs, the way to go about it is to get one LED fixture and use it on a single plant or two for an entire growing cycle.

Make some adjustments with the light spectrum, and see what happens. Maybe do that more than once, with multiple plants, to play with the lighting recipe before trying to replicate it on a mass scale.

“You probably want to start off with one plant and test it out. Everyone is going to get different results,” the Deschutes Growery executive said. “Don’t just take down all of your lights and replace them.”

Peterson suggested purchasing a light meter and closely monitoring a single plant – or a few – during the experimentation phase. Then closely document all different variable factors and settings – such as watering, the distance between the plants and the light, etc. – so a successful experiment with a larger number of plants can be duplicated afterward.

Also, be sure your employees have experience with the technology before diving in.

“People are going out of the chute and building giant facilities with all LED and they don’t have growers that have ever grown with them. That’s a risky proposition,” Peterson said. “Make sure you have experience with the technology.”

Hifi Farms’ Vinal said that after using LEDs he was surprised how much more water his plants needed. He also found that the lights were so intense they actually burned some of his plants.

MedMen’s Solomon said the lack of heat could also necessitate adjusting whatever indoor climate control a grow operation may have, which could range from temperature to humidity.

And, depending on a company’s finances, another way to go may be to experiment with different brands or types of LEDs, given that more and more LED technology is being released into the market.

“What you’re using now … the company might have something brand new in six months. That’s how fast this industry is moving,” the Deschutes Growery executive said.

The bottom line, Peterson said, is that the name of the game for marijuana growers is efficiency.

“As the price of cannabis continues to decrease, people have to get more efficient,” Peterson said. “And lighting is a huge cost, especially indoors. If you can cut your lighting costs by 30%-40% with a more efficient lighting source and not hurt your yield in the process, then that’s the future.”