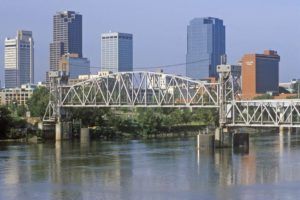 (This article has been updated from an earlier version to note that state regulators have approved a rule allowing the state to hire a consultant to help review pending license applications.)

After a months-long delay due to a court ruling, Arkansas is developing a plan that could result in the state’s medical cannabis program launching in early 2019, a state official said Tuesday.

Scott Hardin, communications director at the Arkansas Department of Finance and Administration, told Marijuana Business Daily that regulators could award five cultivation licenses as soon as July 9 and the product could be on the shelf in the first few months of 2019.

Meanwhile, the state’s Medical Marijuana Commission approved a rule allowing regulators to hire an independent third party to review what are now 227 pending dispensary applications, a move aimed at alleviating public concerns about the process.

Hardin wrote in an email that such an outside review also would likely take less time than for the commission to grade the 500-plus page applications itself. A total of 32 dispensary licenses will be issued under the MMJ program.

Arkansas’ medical marijuana program was approved by voters in 2016 but hit a snag when a judge ruled the process for awarding cultivation permits was unconstitutional.