Perhaps that whole MMJ crackdown thing in Michigan isn’t such a good idea, after all.

The state collected $10 million in application fees from medical cannabis patients during its most recent budget year, which ended Sept. 30. After subtracting costs, cash-strapped Michigan netted a surplus of more than $6 million through the program, according to a new report.

If there’s ever an argument for states to legalize and regulate medical marijuana, it’s this type of data. The numbers show the potential for MMJ to lift states and cities out of the economic doldrums via registration fees and tax dollars.

In fact, these figures could come into play down the road in Michigan, as they might help convince lawmakers to rewrite the state’s cannabis laws in a way that is favorable to the MMJ industry (and particularly to dispensaries). Michigan could make tens of millions of dollars more by putting a system in place to regulate dispensaries and collect special taxes on cannabis sales rather than hinder the industry by cracking down on it.

Revenues from the program are on the rise, increasing more than 10 percent from the $9 million recorded during the previous previous fiscal year, because of a spike in the overall number of patients.

According to the state’s MMJ website, there are currently 124,417 active registered patients – up from 60,000 two years ago – and another 25,857 caregivers. Several areas of the state saw particularly large patient growth, including Cass County (which reported a 56% increase during the last fiscal year), Muskegon County (44%) and Berrien County (37%), according to the Associated Press.

Most patients in Michigan pay an annual fee of $100 for their medical marijuana cards, although some low-income residents qualify for a reduced rate of $25. Caregivers also pay a fee. That money is then used to cover the cost of the program, and any surplus goes into the state’s coffers. 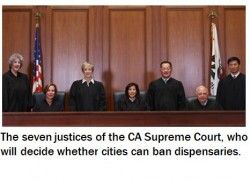