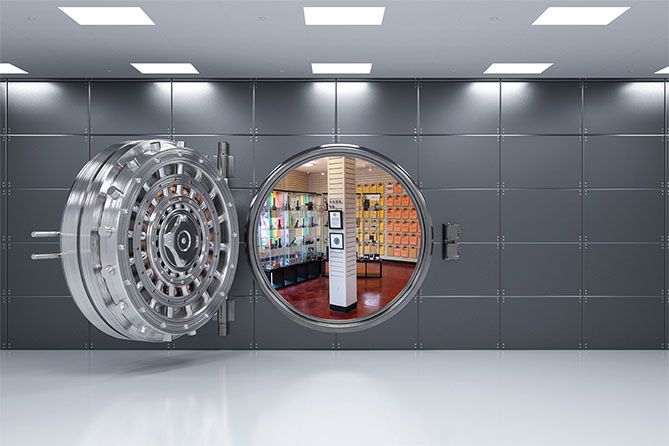 Break-ins and theft are universal threats at cannabis businesses. In recent months, thieves have targeted marijuana retailers in Chicago, Seattle, Bozeman, Montana, and Sacramento, California. In Denver, dispensary robberies hit a three-year high in 2019, including a rash of six related armed robberies.

Marijuana retailers are appealing for thieves because they’re open to the public, sell a valuable product and often are paid in cash.

While Denver police said the six armed robberies in 2019 targeted product, that isn’t always the case.

“In the early days, product alone was maybe enough to be a real draw for thieves, but cash is much more attractive,” said Morgan Fox, media relations director for the National Cannabis Industry Association.

With the SAFE Banking Act held up in the U.S. Senate Banking Committee, the industry doesn’t have a clear path away from its cash economy. And projected cannabis sales around $28 billion nationally by 2023 amounts to a lot of cash.

Being smart about cash is an obvious way to reduce risk and protect profit. Bank or credit union accounts can help, but they can be pricey and hard to find.

Some cannabis stores have on-site ATMs. Others are turning to cashless ATMs. Some of these machines provide a voucher for a customer-selected dollar amount, which the customer hands over at the register. The clerk returns the difference between the voucher and the purchase price in change. Other systems let customers use a debit card at the register. Customers pay ATM fees for both methods.

Cashless ATMs aren’t a fail-safe, according to Bob Ramstad, owner of OZ. Recreational Cannabis in Seattle. “The prices are high, and it’s likely federally illegal for the customer because they are transferring money over state lines to buy a Schedule 1 drug without permits. Because it happens in cyberspace, it’s inherently federal. If they hand cash to us at our counter, the sale is in Washington state and not subject in the same way to federal laws.”

Cash-transfer apps provide another option. Among the better known services is PayQwick, which operates like the Starbucks app, but for cannabis. Customers fund the app from their bank account and then use it to pay at the cannabis store. The company, which is based in Calabasas, California, has active or planned operations in 18 states.

Whatever method you use to manage money, minimizing cash on hand is essential, said Ramstad, who recommends keeping no more than two times daily sales in cash on-site. “In my opinion, it is best practice to have a checking account and pay vendors and employees using that account. Checks create a paper trail, so you don’t have to worry about proving to someone that you paid them. More importantly, they allow you to greatly reduce the cash on hand.”

Jerry Millen, owner of The Greenhouse cannabis store in Walled Lake, Michigan, estimates banking costs him $20,000 per year. He also invested in a smart safe with built-in security features to protect his business and employees.

Cash-focused businesses from casinos to quick-service restaurants to Costco stores use smart safes, which offer features such as automatic bill counting and sorting as well as counterfeit detection. PIN-secured logins, electronic connections and touch screens let owners keep an eye on the balance and reporting while protecting privacy. And these safes are very secure: They’re bolted to the floor with anti-drilling locks. Makers such as Hyosung, Loomis and Tidel offer smart safes starting around $8,500 for a basic version and priced as high as $35,000-$45,000, depending on options.

When moving cash, security practices are vital. Whether you use a smart safe or a drop safe similar to those found at a 7-Eleven, executives at Denver-based Helix Security recommend that businesses schedule cash pickups at least every other day. Retailers should hire an armored service to transport cash. These services charge a fee of 3% to 6% of the amount of cash being moved, according to Helix Security. Fees vary, however, with one industry executive in Michigan putting the figure at 1%.

Physical security is any barrier between a business and those who would harm it. That includes walls, fences, guards and cameras.

“The level of security starts with your doors—egress, ingress and locks—and how that’s monitored,” NCRMA’s McBath said. “You need to have cameras in place; there are requirements for safes to be a certain poundage. There’s transportation—who’s bringing product in and how it’s moving. A lot of that is common sense.”

With that in mind, don’t forgo the basics. Lock up product on the floor as well as in the vault. Some owners install a bulletproof, reinforced safe room or panic room where employees can retreat during an intrusion. Depending on the area and level of risk, some dispensary owners go a step further by armoring the building or placing concrete-reinforced posts outside, in front of doors or walls, to prevent vehicles from driving through.

A mantrap—a small secured space where only one customer at a time can enter or exit—limits exposure to employees, other customers and product. Besides controlling access, mantraps enable employees to identify customers and lock doors remotely if they suspect a problem.

But John Orloff, senior vice president of security risk management for Jensen Hughes, a global safety, security and risk-based engineering and consulting firm, noted that employees sometimes get lax with people they know, including current or former clients. For example, a marijuana retailer might tend toward leaving the exterior door unsecured, which risks security personnel being caught in the mantrap with an armed attacker.

To avoid that situation, Orloff’s firm recommends retailers allow only one person at a time through the exterior door and into the mantrap. Employees can unlock the door remotely and then, once the customer is in the mantrap, open the interior door to admit the customer to the store itself. He urges retailers to post the policy on the building exterior to inform customers about the procedure.

“Most people will adhere to written guidance if you post it and you stick to it,” he said. “Employees have to be trained on it. They have to understand why it’s important: It’s for their safety—their patrons’ (safety) and the safety of assets inside the building.”

At a basic level, security can help with the business owner’s mandate for workers to keep an eye on the cash register and exterior. Employer-established security settings can control access to rooms and registers.

“One thing typically not included (in state or local requirements) is a key-card-access control system,” noted Kevin Brown, sales manager for Helix Security. “That can go a long way toward helping track movement throughout a facility.” Key-card access doors start at $1,500 per door.

“I would encourage owners to not take a position that cameras are the end-all, be-all,” Orloff warned. “Cameras have real value when someone’s watching and monitoring. In that case, they are a force multiplier. (Otherwise), they’re just recording and giving a false sense of security.”

Millen recently revamped his security system at The Greenhouse to include cameras that can spot movement in any area of his property as well as the lot across the street. The cameras are monitored so that if security sees someone approaching, they can call out to the intruder over a loudspeaker.

Helix Security provides monitored camera service to clients starting at 50 cents per camera per hour. “If our monitors are seeing someone break in, they can communicate with the bad guy: ‘We see you, and law enforcement’s been notified,’” Helix Security President Grant Whitus said. “Previously, the monitoring center would see a crime happen, but (the criminals) would be long gone by the time police got there. We’ve had good success with people leaving (when we call out).”

If you opt for monitored cameras, Millen advises companies not to “cheap out” with a partial system. Be sure you cover every inch of your property so thieves can’t slip through a blind spot.

“Let’s be honest, if you have a dispensary, and you’re running it right, you’re making money,” Millen adds. “To me, security is the most important thing—besides having great product.”