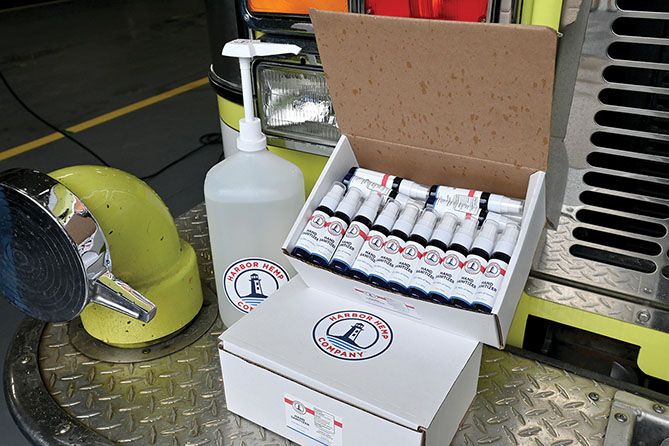 Doing good can be good for business. Extending a hand (or maybe an elbow bump) to one’s customers and communities during a global crisis such as the coronavirus pandemic not only helps those in need but might also boost a company’s reputation—and even its bottom line.

For North American cannabis companies, that has meant producing and donating hand sanitizer, bankrolling sanitation stations and donating personal protection equipment to health-care workers and first responders, among other steps. It’s a strategy that mainstream companies—ranging from craft distillers to The Gap—also are pursuing in response to the coronavirus pandemic.

Charitable actions can generate other benefits, too. They include:

North American cannabis companies stepped forward during the coronavirus pandemic and extended aid to the local community. What follows are examples of those actions:

Aloha Green Apothecary is using its cannabis manufacturing facility to produce free hand sanitizer for its 329 patients with medical marijuana cards. Tai Cheng, Aloha Green’s president, said in early spring that the company had manufactured more than 10,000 bottles of sanitizer in less than a week and distributed 1,000 bottles to customers and neighborhood fire stations.

Such freebies come at a cost. Cheng is paying twice the pre-pandemic price for the alcohol used in the company’s hand-sanitizer formulation and said shipping costs to the island are high.

“We have had to fly in ingredients and packaging. We do not have dedicated equipment to produce hand sanitizer, and we do not produce enough to gain any economies of scale enjoyed by producers such as Purell,” Cheng said. “We produce at a cost that is only marginally cheaper than the retail price of nationally available hand sanitizers. … This is mainly due to high packaging and labeling costs.”

He added that Aloha Green also reduced the output of cannabis oil and manufacturing by about 20% in order to assign one lab technician to produce and oversee hand-sanitizer production. However, conversion needs have been relatively minimal, involving only a stainless-steel tabletop, a mixer and some filling equipment. And in terms of offsetting costs, Cheng said gratitude from patients and boosts to employee morale are reward enough.

“We have enjoyed the process of planning, developing and executing production of a consumer packaged good in about 10 days,” he said. “We think it has really brought our team together.”

The company donated personal protective equipment from recently shuttered British Columbia cultivation sites to frontline medical staff at a local health unit in Victoria, according to Jordan Sinclair, Canopy Growth’s vice president of communications. He added that the company has also “donated gloves and masks to the Smiths Falls police department.”

CDA President David Torrisi said that because ethanol is one of the main ingredients used in making sanitizer and some cannabis extracts, the group’s 36 members already had most of the materials needed to pivot to sanitizer production. Approximately 60% of CDA members volunteered to collaboratively produce up to 5,000 gallons of sanitizer per week, all of which is being donated to local hospitals.

Torrisi did not estimate the cost of the donations, nor did members discuss expense when deciding to respond. However, he said there were no costs beyond supplies, since no conversion of members’ facilities was required.

“Businesses rally around their communities in a time of crisis,” Torrisi said. “I don’t think they’re looking at it in terms of the bottom line.”

He did acknowledge that the positive media coverage the CDA is receiving might attract members. “It can’t hurt,” he said.

MHA is handling transportation and distribution issues as well as the bulk of logistics such as collaboration between the CDA and state pharmacy directors, among other tasks.

A GoFundMe campaign that raised more than $3,000 to provide sanitation stations to Sacramento’s homeless population started an initiative that’s now ensuring some of the city’s most densely populated homeless encampments have access to preventative hygiene in the wake of the COVID-19 health crisis.

Caity Maple, an advocate for the homeless and vice president of government affairs and compliance for Perfect Union, started the campaign, which raised the funds in only a few days. Perfect Union then matched donations, and Maple collaborated with the Sacramento chapter of the National Union of the Homeless to locate 30 sanitation stations in five or six areas with high levels of homelessness.

“From the inception of our company, we’ve offered free services to guests,” said Julie Hagans, Perfect Union’s director of retail experience. “This was an extension of our philosophy.”

In terms of benefits to Perfect Union’s own bottom line, Hagans said the opportunity to partner with the city builds trust that might later prove beneficial. Receiving positive press also might boost business, she said, because it helps reduce the stigma associated with cannabis and could influence people who wouldn’t otherwise visit a dispensary to do so. “And maybe,” she said, when they do, “they’ll remember Perfect Union.”