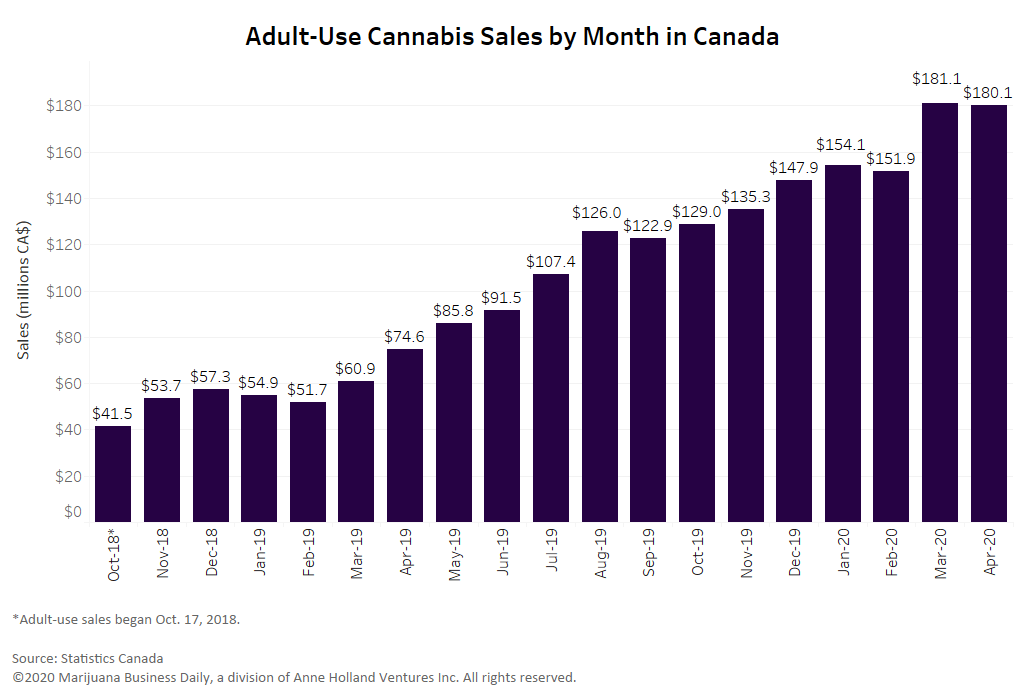 However, the relative strength in monthly cannabis sales was not consistent across all of Canada’s 10 provinces.

ADVERTISEMENT
In the country’s largest market, Ontario, cannabis sales fell by 9.6% on a monthly basis to CA$42.8 million.

Cannabis retailers in Ontario were forced to close in April because of an emergency order early in the month but were later allowed to reopen with curbside pickup and home delivery.

Mimi Lam, co-founder and CEO of Ottawa, Ontario, cannabis retailer Superette, said her store’s sales declined about 50% from March to April as the shop shifted to pickup and delivery only, then rebounded in May.

Lam attributed some of that decrease to being unable to accept cash transactions, which historically have comprised about one-third of Superette’s sales.

“Because people aren’t able to use that method of payment, a lot of them have not converted to online payments for whatever reason that may be,” she said.

Quebec, the nation’s second-largest market by population, experienced a 9% monthly increase in sales to just over CA$41 million.

Cannabis sales growth was flat in British Columbia, shrinking by 0.2% to CA$23.6 million.

In March, the province allowed regulated cannabis stores to start accepting product reservations online. However, payment had to be conducted in-store. BC Cannabis Stores – run by the province – operates an e-commerce monopoly.

Alberta is Canada’s fourth-largest province but has far and away the most retail cannabis stores in the country at 480.

He said sales remained steady after a significant boost in March as customers hoarded cannabis.

“It doesn’t surprise me because, talking to our customers, they had nothing else to do,” Hollingsworth said.

Monthly cannabis sales on the island province shrank by 63.7% to CA$435,000 after provincial stores were closed in mid-March and stayed shuttered until May.

Bierman and Modlin leave board of cannabis firm MedMen