Cresco Labs CEO Charles Bachtell has been going to Mindy’s Hot Chocolate, a well-known Chicago restaurant a short walk from his house, for about 10 years.

Little did Bachtell know that one day he would team up with the restaurant’s owner – nationally known chef Mindy Segal (pictured) – on a cannabis-related endeavor.

Segal and Cresco are partnering to produce a line of marijuana-infused sweets. Cresco, which won three cultivation licenses in Illinois, will provide the extracted THC and other ingredients, while Segal will provide her baking skills and create the final product, branded under her name.

It’s a pretty big coup for Cresco: Segal won the James Beard Foundation award for Outstanding Pastry Chef in 2012, and she authored the award-winning cookbook “Cookie Love.” So her name might go a long way with patients looking for higher-end edibles products.

The move is also part of a larger trend in which cannabis companies are hooking up with celebrities and mainstream professionals who bring a new air of legitimacy to the industry.

And instead of just using a celebrity’s name – as some other companies are doing – Cresco is getting Segal actively involved in creating products, offering a new perspective on how to effectively work with a well-known personality.

“Her level of sophistication in her profession exceeds what we originally set out to try and achieve,” Bachtell said. “This will absolutely help legitimize where the cannabis industry is moving.”

Segal’s initial products will include chocolate brittle bars, granola bites, hot chocolate, and a ready-made cake and cookie mix with do-it-yourself instructions. Bachtell believes the sweets will be available in dispensaries by late February, but Segal thought it might take longer.

In the process, they are helping each other achieve notable firsts. For Cresco, this is its first go at the edibles market, and it has invested in a high-end kitchen for Segal and her staff to work in.

For Segal – whose main revenue is from her restaurant and branded hot chocolate mix, which she only sells from her eatery – this is her first foray into commercially sold products distributed outside the restaurant.

Indeed, Cresco and Segal have an ambitious plan to distribute not only in Illinois, but also in five other states: California, Colorado, Washington, Arizona and Nevada.

“I feel like this is an industry that is going to grow at rapid rates. I feel like I’m getting in at a time where the future is now,” Segal said. “I think I’m the first sort of well-known chef who has somewhat of a credible reputation to come forward and say, you know what, I’m entering this market.”

Cresco officials initially took a conservative approach to the industry, deciding to focus on cultivating marijuana and making vapor oils, derma patches and pills. The relatively strict nature of Illinois’ program dissuaded Cresco from getting into the edibles market, Bachtell said.

“Conditions are limited. The procedures that are in place are fairly strict as to how somebody participates. Illinois wanted it to be a very structured program, so edibles wasn’t something that we really looked at,” Bachell said.

But not long after winning their licenses last year, Bachtell and his team decided to give edibles a second look.

Bachtell and his team brainstormed who they should approach for their edibles endeavor, and someone suggested Segal.

Last May, Cresco called Segal, who acknowledged wanting to get into the edibles industry. The chef said she hoped to receive just that sort of phone call.

“I got approached by a couple of people, and one of them was Cresco, and as I got to know them more and more I really believed in what they were doing and felt like it was the right thing for me to do,” Segal said.

Bachtell said Segal rang the company back about 24 hours after the initial call.

“From there it just blossomed,” he said.

Cresco’s kitchen, which should be done soon, will be outfitted with extraction, processing and testing equipment. Segal will also have her own staff in Cresco’s kitchen.

Bachtell said he expects the edibles to be available in all of Illinois’ dispensaries (more than two dozen are currently open, and up to 60 are allowed).

“We’ve been establishing relationships with dispensary owners for almost the last year,” Bachtell said. “Now we’re looking at opportunities to partner with people in other states to either license or bring the Mindy brand out here in some partnership relationship and get Mindy national.”

Bachtell didn’t discuss the terms of the agreement and said it is too early to predict what kind of revenue the edibles will generate for the company.

While Segal is an accomplished chef, she admits that she has a lot to learn when it comes to preparing and marketing marijuana infused edibles.

She recently took a trip to Colorado to visit dispensaries and learn about edibles branding and infusion. She’s also working with Cresco’s marketing specialist, as well as its chief of extraction to make sure products are dosed and infused correctly.

“I branded my hot chocolate in a fly-by-night, grass roots sort of way, and to be able to have resources to brand a product in a professional way is very exciting for me,” Segal said. “There’s a learning curve. I’ve dabbled in it as a recreational user, but not in a mass production sort of setting with oils and extraction and different THC and CBD percentages, and getting the right amount in each bar and getting the right affect, that’s lab work, that’s science.”

Giving that sort of backing to Segal was critical for Cresco.

“When we started looking at this edibles space, first and foremost it was about making a product that has that consistency to be relied upon. The first piece of chocolate in the package will have the same dosage as the last piece,” Bachtell said. “That was the primary focus, and then supplementing it with somebody who could add the other components, and that’s Mindy with her recipes and her knowledge of ingredients and flavors.”

As “the face” of Cresco’s edibles line, Segal brings a sophisticated star power to the cannabis industry, a kind that is far different than the attention brought by celebrities who are famous in part because of their cannabis connections, like Snoop Dogg, Julian Marley or Tommy Chong.

“What’s kind of unique about the Mindy situation, it’s less of a focus on whatever notoriety or celebrity status she has and more that she’s a professional in that field, and that’s why she has it,” Bachtell said. “So our affiliating with her is a unique situation where the celebrity profile that’s associated with the product is based on that being their area of expertise.”

This is the kind of celebrity that is good for the industry, Bachtell said.

Chart of the Week: Sizable Appetite for Marijuana Infused Products & Concentrates in Illinois 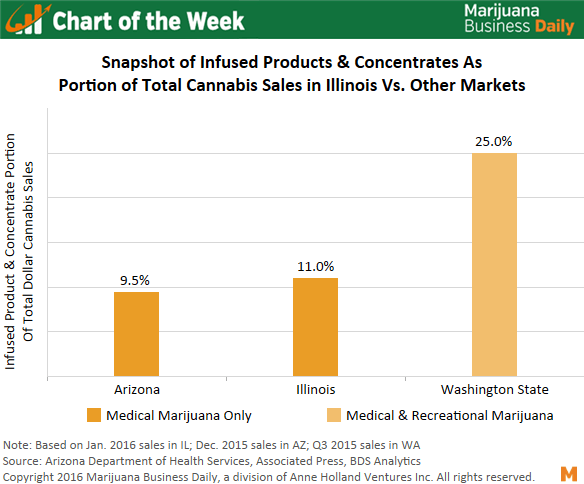