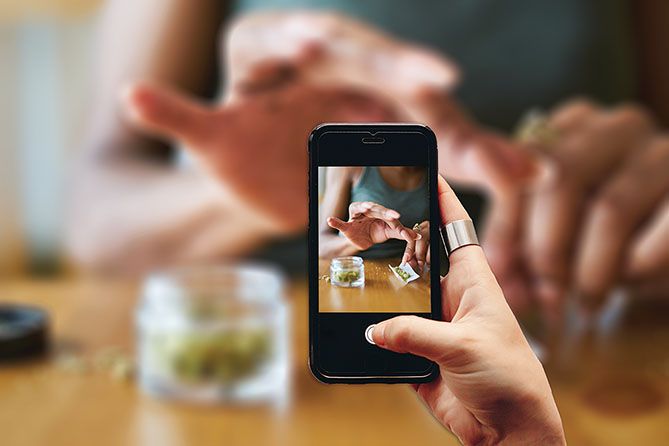 “Cannabis brands cannot utilize social advertising currently—meaning no Facebook ads, no Instagram ads, no LinkedIn ads, no Pinterest ads, etc.,” said Natalie Cupps DiBlasi, co-founder of Laced, a Redondo, California-based strategic digital agency that specializes in cannabis marketing. “The No. 1 way (brands can get their) message out there is through influencers.”

Influencers can be valuable because they have established a level of trust with their followers and can affect purchasing decisions.

Unlike actors who promote products via TV and other forms of conventional media, social media influencers participate in an online dialogue with their followers. Each time an influencer posts content—be it a written post or video—followers may respond to it with questions or comments, to which the influencer can then reply.

No Need to Spend Big

Cannabis companies don’t need to spend millions to hire celebrities to pitch their products, however. Instead of hiring, say, a Kardashian, they can get more bang per buck by hiring a “micro-influencer,” someone who isn’t well known and whose audience is smaller but who can reach a more customized group, engage more frequently and personally with followers and, therefore, be more effective in terms of persuading them to purchase a product.

Hiring influencers to promote your brand can expose your company to a wider social media audience. A 2019 Pew Research Center report found that a majority of U.S. consumers visit social media platforms, with the most popular being YouTube (73%), Facebook (69%) and
Instagram (37%).

Moreover, for every dollar spent on influencer marketing, the average company earns $5.20 worth of publicity, or “earned media value,” according to Influencer Marketing Hub, which helps link influencers with brands.

A Spectrum of Influencers

There’s a range of different types of influencers, and it’s important for cannabis companies planning social media campaigns to choose the type that will best achieve their business goals.

At one end of the spectrum are household-name “macro” influencers with massive numbers of followers—think singer Selena Gomez or rapper Snoop Dogg—who promote hundreds of products to the general public and have tens of millions of followers. At the other end are relatively unknown influencers who have a smaller audience, numbering up to 10,000, but those followers are focused on specific interests. These micro-influencers can offer personal experiences with a product and educate their followers about it.

DiBlasi said cannabis executives mulling the use of influencers need to ask themselves the following questions: “Is influence a large group of followers? Or is influence the ability to persuade people to buy product that’s relevant to your target audience?”

While celebrity influencers can reach millions of consumers, experts say their audiences are too general to have high “conversion” potential—in other words, although they reach massive audiences, they’re less likely to convince followers to become customers of your product.

Additionally, because celebrities aren’t experts on your brand or on anything related to your brand, they’re not considered to be credible sources of information. Further, they may promote competitors’ products, aren’t seen as being “authentic” and are more expensive. According to Social Media Today, which tracks the social media industry, a single celebrity post can cost anywhere from $2,000 to $500,000, compared with about $180 for a micro-influencer post.

“The whole value of influencer marketing is getting (consumers) to change their minds, and there’s ample research that shows celebrities in marketing don’t change people’s minds, because everyone knows they’re just paid to recite a line given to them,” explained Jim Tobin, president of Carusele, a North Carolina-based social media company.

The most effective type of influencers for cannabis companies, experts agreed, are micro-influencers.

Rather than being promoters, they’re educators: They use your products and may have expertise in areas affiliated with them.

“You want to be gravitating toward people who actually speak about a lifestyle or a particular subject matter that’s related to what your product does,” DiBlasi said. “So, if your product relates to the medical industry, you’re going to want a medical practitioner or holistic practitioner.”

However, micro-influencers should not make claims about products.

It’s not advisable, for instance, to have medical practitioners or influencers with medical expertise educate followers on how to use cannabis to treat medical conditions, DiBlasi noted.

“That would be considered a ‘claim’ by the (U.S. Food and Drug Administration) and is considered a more risky approach to marketing,” she said.

Influencers, therefore, should share only their personal experiences with products and disclose that the information they offer is solely their own opinion, rather than a claim made by the company itself.

Instead of claiming, “‘This cannabis product heals joint pain,’” for example, an influencer should say, “‘I experienced great pain relief from this cannabis remedy for my joints,’” DiBlasi said.

Taking an educational approach is important to cannabis companies because a large part of their potential customer pool is made up of what DiBlasi calls the “canna-curious”—consumers who want to know more about cannabis but are too intimidated to visit a dispensary and speak with budtenders.

“Until it feels completely friendly and educational for the regular mainstream customer who’s canna-curious, they’re going to be looking for that education in social media,” she said.

Micro-influencers are also more effective at raising brand awareness than influencers with larger follower counts because they have higher-quality “engagement metrics.”

Engagement metrics measure several aspects of influencer/follower interaction, such as how often influencers post content, how often followers respond and how many likes, comments, shares and clicks their posts generate.

“They literally respond to nearly everybody that responds to their post, on a daily basis,” DiBlasi said.

Assessing quality of engagement, however, doesn’t involve just measuring frequency of interaction. Nor is it limited to counting “likes” and comments.

Likes don’t “necessarily mean that they like your product,” said Susan Rust, founder and CEO of 4Blooms.Guru, a San Diego cannabis/hemp branding, design and packaging agency.

Likes can simply imply that followers “like the artwork or the photo,” Rust added. And, while a “comment is worth more than a like … the comment can be ‘hate your product’ or ‘buy my stuff,’ so (it) may not generate any future sales.”

“The best places to find micro-influencers are either on the social platform where they reside, such as Instagram, or on influencer databases,” said Tom Augenthaler, director of 551 Media, an influencer-marketing consultant based in Houston.

“When searching for them on Instagram, use hashtags so you can find them through their content,” Augenthaler said. “When you find some you like, be sure to check not only their audience size but the quality and frequency of their content.”

Using an influencer database, such as Scrunch or TinySponsor, can also be helpful, he added, because it allows you to sort influencers by category, such as “health” or “organic.” Databases also offer statistics, including audience size, what social media platforms influencers use and what they charge.

When it comes to influencers, measuring your return on investment (ROI) depends on what the goal is, DiBlasi said.

Lead generation, DiBlasi explained, means collecting data that your social media followers are willing to share with you.

“You’re going to be looking at, sure, brand awareness and engagement metrics (but also) how many people clicked through to a landing page and filled it out and then deposited their info. into your database,” she said.

“You’ll want to measure how many people said, ‘You know what, I want a direct dialogue with your brand or your company. I want you to email me or reach out to me now that you know who I am and tell me when you have a (product) at the dispensary or a special event I can attend to learn more.’”

“From a digital marketing standpoint, we can definitely track all the way through the lead funnel—from where people see a message online, to when they click on that message, to how many click all the way through to a brand’s website on where to buy. (After that point), it becomes a little more challenging to track them all the way into the dispensary,” she said.

Looking ahead, cannabis companies are expected to face advertising obstacles as long as the federal government continues to outlaw marijuana and social media giants persist in restricting MJ businesses from promoting their products. But most experts believe that the situation will improve.

“We have to get clever, real clever,” DiBlasi said. “It can be challenging, but I think that’s going to change over time.”