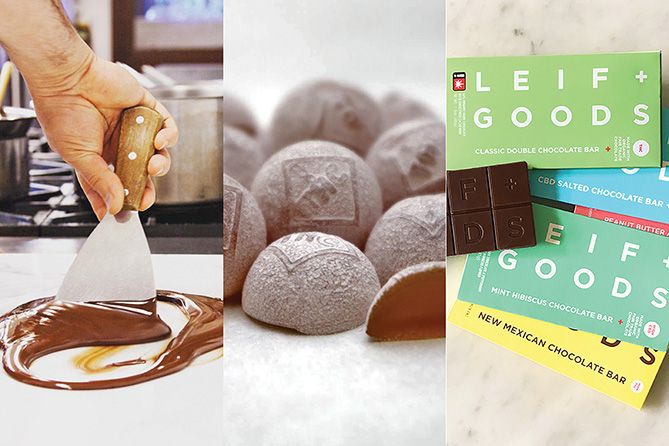 As marijuana cultivators work to define “craft cannabis,” makers of infused products are trying to do the same—and explain to consumers why (in some cases) they should be willing to pay more for such items.

What defines cannabis-infused craft products depends on whom you ask.

For some, it means using sun-grown cannabis for extracted oils or tapping local purveyors of herbs and fruit for ingredients.

For others, it means finding producers of rare cacao in indigenous villages or producing only vegan products that are free of common allergens.

For nearly all, it means “creativity and quality,” said Carrie Solomon, the CEO and founder of Leif Goods, a Portland, Oregon-based manufacturer of cannabis-infused chocolate bars, candy and topicals.

“Craft means attention to every detail,” she added.

The founders of Binske like to say the highest standards for craft infused products didn’t exist—so they created them.

The company sells flower, edibles, concentrates and topicals, but it is perhaps best known for its use of Peruvian Nacional cacao, a raw ingredient that The New York Times called the “rarest cacao in the world.”

For its edible products, Binske partners with international fair-trade farmers for added ingredients.

Binske buys tangerines from Morocco, lemons from Myanmar and chipotle peppers from Mexico. For its infused honey, the company works with one of Colorado’s longest operating beekeepers.

“Yes, (infused products are) a delivery mechanism that delivers THC to consumers, but we just happen to use some of the finest raw ingredients in the world,” said Alex Pasternack, the executive vice president and co-founder of Binske.

Binske’s packaging also sets its products apart on store shelves. The detailed and colorful hand-cut collage artwork that is featured on the packages is created by an artist in the United Kingdom. It’s critical to helping the brand establish itself with consumers and convey its commitment to craft cannabis, Pasternack said.

Binske uses a hydrocarbon extraction method to create its products, but the company uses a lower ratio of solvents to plant matter. A higher ratio could produce more yield and revenue, but it would affect the color and quality of the oil, Pasternack said—and that’s not something the brand is willing to do.

For its flower and concentrates, Pasternack is working to educate consumers that the potency of THC is a factor, but it isn’t the only factor.

An example Pasternack likes to use with consumers: The grain alcohol Everclear has a higher alcohol content than Johnnie Walker Blue Label, “but that doesn’t mean it’s what you want to drink,” Pasternack said. “We have to teach people that 23% THC can be and is often superior to 27%.”

For Garden Society, a maker of fruit gelees (similar to gummies), chocolate and pre-rolls, the commitment to craft cannabis is all about using the best ingredients it can source and working with local suppliers.

This method also promotes the entourage effect, she said.

“We believe in the whole plant,” Warner said. “Whether you’re eating vegetables or consuming cannabis or using essential oils, we believe in utilizing as much of what Mother Earth has grown and provided.”

Garden Society’s vegan fruit gelees are made with whole fruit puree and apple pectin for thickener, rather than gelatin, an animal byproduct.

It also uses as few ingredients as possible and skips using additives, such as food coloring, Warner said.

The gelee mix is made by hand on a stovetop and poured and cut by hand, a process Warner admitted isn’t “the easiest or most efficient.” But, she noted, it more closely mirrors the techniques of French confectioners, and it’s truer to the brand’s commitment to producing craft products.

Garden Society works with local suppliers of chocolate and fruit, and its packaging is designed by a woman-owned business in the East Bay region of Northern California.

“It’s not just about finding the lowest price or the quickest turnaround,” she said. “You have to have partners who share your values and who provide sustainable supply in a way that’s meaningful to the end consumer.”

“Any craft pursuit is sort of a pursuit of making something,” said Solomon, the CEO and founder of Leif Goods. “There’s a homegrown
quality to it.”

Don’t compromise on the quality of ingredients, regardless of what might be more lucrative, Solomon said.

Solomon prefers to use full-spectrum oil because she calls it a gentler process with roots in medical marijuana treatment.

When possible, Leif Goods also sources local ingredients, she said. She avoids including potential allergens in her products such as nuts, gluten or dairy.

For its topicals, it would be less pricey to buy wholesale, off-the-shelf creams to infuse; instead, Leif Goods mixes its products in-house.

“If we can satisfy the needs and desires or a larger demographic without compromising on other qualities like flavor or texture, that’s what we’ll do,” Solomon said.