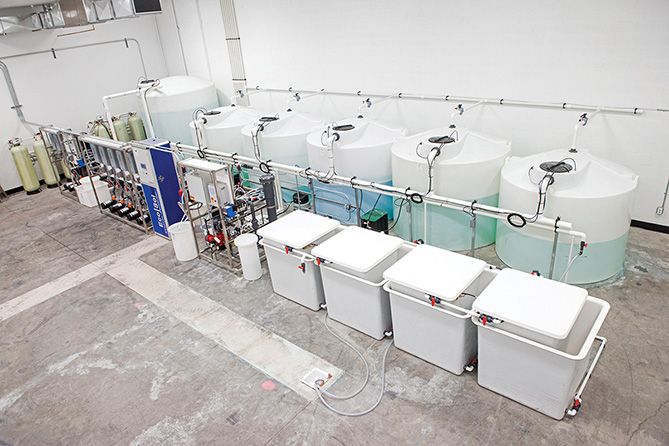 In typical marijuana cultivation operations, water acts as a vehicle to deliver nutrients and minerals that cannabis plants need to thrive.

Outdoor growers in regions such as the Emerald Triangle in Northern California rely on captured rainwater, which often naturally contains minerals at levels that can be beneficial to cannabis.

But indoor growers—especially those in urban environments—can’t just irrigate cannabis with municipal water. Straight from the tap, city water contains too many unknowns, including chlorine and other contaminants.

Cameron Bravmann, the principal of Green Belt Strategies, a Portland, Oregon-based cannabis consultancy focused on cultivation, said if you’re in an area with decent municipal water, it’s possible to use it to grow cannabis.

It’s smart to filter out any contaminants, but if the water is tested regularly (at least once each quarter), a cultivator can create a nutrient mix that incorporates some of the naturally occurring minerals in the water. Just reach out to a local laboratory to have your water tested.

“I have grown with municipal tap water and done just fine,” Bravmann said.

A grower using rainwater can rely on the soil to provide a buffer in the way that a hydroponic medium doesn’t, he added, which will help mitigate or break down any unwanted minerals or contaminants.

“Most people will say rainwater is pretty good water,” Bravmann said, though he admits large-scale cultivators will want to remove any variability from the water supply.

If a cultivator really wants to create a consistent, reliable irrigation system, Bravmann recommends that any grower who can’t use rainwater buy a reverse osmosis (RO) system, which removes contaminants from water by forcing it through a porous membrane.

“That’s the one way to guarantee uniformity,” he said. “RO water is about the same in Portland as it would be in Colorado.”

While Bravmann admits it can be a little wasteful—as you pull the particulate out, you lose water volume—RO creates a blank canvas to work on.

The city of Las Vegas’ water has a comparatively high number of dissolved solids and other unwanted elements, so he runs it through a HEPA filter to block any large particles, a carbon filter to trap the chlorine and two RO machines for purification.

One RO system can fill a 3,000-gallon tank; on a heavy day, Cesario’s team will process roughly 8,000 gallons for 25,000 square feet of canopy, which is irrigated with a hydroponic system.

The RO water is at least 99% pure, Cesario said. His team then formulates nutrients to add to it.

“It’s like a clean slate,” he added. “You really have to balance your feed based on the water source.”

To stabilize the pH, he adds a “buffer” that typically includes potassium bicarbonate. A common pH range for water is 5.5-6.5, but that can vary depending on the strain, grow media or the stage of the plant’s life cycle, according to Cesario.

While the expense for the RO machine can vary based on a number of factors, including size and amount of filtration, Cesario said the price consumers pay for cannabis justifies the equipment cost.

“It’s such an intensely grown crop and such a high-value crop,” he said. “It’ll help you achieve your maximum potential.”

One criticism of RO is that it can be resource-intensive. Often, the dissolved solids that are removed from the water reduce the overall volume considerably.

To help conserve moisture, Cesario reclaims condensation that forms around the HVAC system.

As far as maintenance, his team tests the machine and water frequently—as often as every day—to ensure everything is flowing as it should.

In Humboldt County, California, David Digiallorenzo, owner of Casa Humboldt, sources his water from the sky.

It rains enough that if Digiallorenzo can collect rainwater properly, he’ll have water all year long.

Digiallorenzo’s tanks can hold 80,000 gallons of water—enough to irrigate two 10,000-square-foot sections. He’s never had to use supplemental water to make it through the year.

“That’s the interesting part of regenerative farming,” he said. “You’re guided by the elements, the rainy season.”

Digiallorenzo uses a Netafim drip irrigation system that is buried in the ground, under the plants.

“That’s the best method for conserving water because you don’t have evaporation,” Digiallorenzo said. “If you’re watering on the surface of your plants, you’re going to have evaporative loss of moisture and water.”

The underground system causes the roots to stretch downward, he said, which causes some stress on the plant, but this way the roots aren’t looking to the surface for water.

“If I took you on a farm tour, you would go, ‘Oh, my god, it’s so dry,’” Digiallorenzo said. “But if you scratch the soil down about 4 inches, you’d see some elements of moisture far below the surface.”