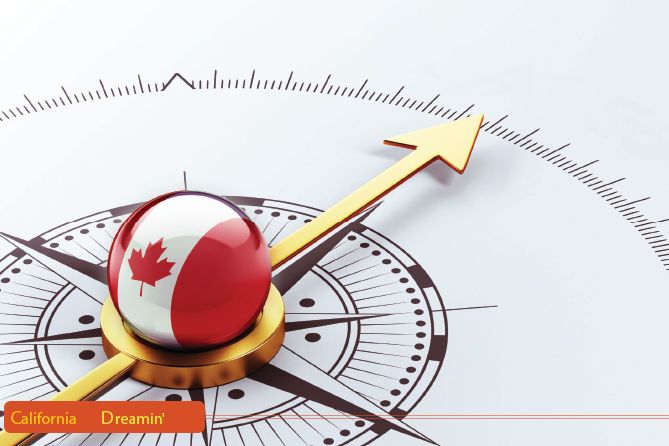 Canadian companies looking to enter California’s marijuana market next year will find plenty of opportunities – and a fair share of challenges.

As California patches together the regulatory framework for the launch of its MJ market in 2018, some medical cannabis businesses in Canada are already sizing up the market and devising plans of attack.

One CEO waiting on California’s doorstep is John Prentice, CEO of Ontario-based Ample Organics, a seed-to-sale software company. He believes some of the most compelling opportunities involve the areas of retail, distribution, production and technology.

“Every aspect of the industry that we’re seeing present in Canada is going to need to be replicated in California,” he said.

Marijuana Business Magazine talked with Canadian cannabis companies for some insights into what entrepreneurs and investors up north should consider as they weigh the California opportunity.

Companies will need to make sure they tailor their strategy to California’s unique market dynamics and regulatory frameworks, which will vary substantially from city to city. The industry also will be markedly different in general than the one in Canada, as many different types of licenses will be available for plant-touching companies.

“It’s going to be larger than the Canadian market over the next five or 10 years, but how you actually grab value is a big question,” said Matt Bottomley, a research analyst at Canaccord Genuity, an investment banking and financial services company in Toronto. “The type of asset you buy is up to your due diligence and where you think the opportunity is. If you want to deploy capital to carve out market share, you have to be very strategic in terms of how you do that.”

In markets like Florida, an investor or business can acquire an asset from one state authority that permits cultivation and retail, and it comes with the certainty that only a small number of licenses will be granted, making it much easier to carve out market share.

In California, however, investors are more strategic because of the nature of its disaggregated market: Regulations and permits vary across the state, so an investor can’t pick up one license from one central state authority and expect to be able to cultivate and sell cannabis across California. It equates to less certainty.

For iAnthus Capital Holdings – an investor in cultivation sites, processors and dispensaries throughout the United States – the prime strategic opportunity is in retail, precisely because California’s market is disaggregated and less certain.

“It is a wildly uncertain market, so we try to keep our corner of the world as certain as possible,” said Hadley Ford, co-founder and managing director of iAnthus, which is based in New York and has offices in Canada and trades on the Canadian Securities Exchange.

On that end, iAnthus will look primarily at retail opportunities “because it would be very difficult for us to determine in California who is going to be the low-cost, high-quality grower,” Ford said.

“We prefer to be at the other end of the vertical stack as a starting point — the cash register,” he added. “Figuring out who’s going to be the low-cost, high-quality grower over the next five years is fraught with more risk than figuring out if someone has a great corner location with 25 parking spots, $5 million in revenue and great brand recognition in the community in which they sell.”

Companies already trading on the public markets in Canada, or planning to in the future, could essentially be barred from expanding to California.

As a result, some companies that are eyeing an expansion to the United States and planned to list on the TSXV have decided not to go public in Canada. Others have opted for the Canadian Securities Exchange, which allows its members to do business in the United States provided they meet strict risk disclosure requirements.

One company that pivoted away from the TSXV for that reason was Vancouver, British Columbia-based Nextleaf Solutions, which specializes in hemp and cannabis extraction and distillation.

Paul Pedersen, Nextleaf’s CEO, said he “had been working toward a TSXV entry listing, and based on its U.S. policy, we changed course.”

Nextleaf is now working toward a CSE listing because it has its eyes set on the U.S. market.

“That’s something a lot of companies are going to need to be aware of,” Pedersen said. “You pick the wrong stock exchange and you’ve got an issue in where you can do business and where you can have customers.”

Many companies that sprout up in California won’t have access to massive amounts of capital. That’s different than in Canada, where licensed producers – particularly those that trade publicly – are able to raise huge sums of money.

So if you want to sell multimillion-dollar extraction equipment to smaller businesses, you’re going to have to be creative.

NextLeaf’s Pedersen hopes to get around this by leasing out equipment in the California market rather than selling it.

“We look at it as the answer to what’s happening in the states for smaller grows and we want to give them access to the same technology as Canopy Growth and Aphria,” Pedersen said, mentioning two of the biggest cannabis producers in Canada.

Nextleaf is looking to expand into Washington state, Oregon and California over the next 12 months.

“As the California market evolves, there’s going to be a big opportunity there – massive demand for companies needing larger and more efficient extraction and processing solutions to make the product,” he said. However, the company is not looking to sell such pricey equipment “because of the capital restraints in the U.S.”