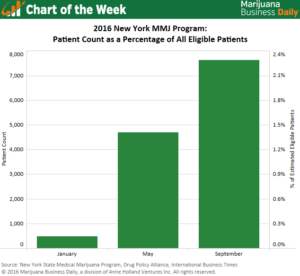 Since late January – shortly after the first dispensaries opened – the number of registered patients has grown by an average of 32% a month.

New York’s MMJ program began registering patients in December 2015, and the first dispensaries opened in January. Those businesses experienced weak initial demand because only a few dozen patients had registered as of opening day.

While it’s difficult to know just how many New York residents can qualify for MMJ based on the state’s current list of qualifying medical conditions, a recent Drug Policy Alliance report estimates the number is between 200,000 and 500,000. Splitting the difference would mean that just 2.2% of an estimated 350,000 eligible participants are currently enrolled in the MMJ program.

Many factors have contributed to New York’s relatively low patient count, including a limited qualifying condition list, a lack of patient access to doctors that can recommend MMJ, a narrow and pricey selection of cannabis products, and a finite number of dispensaries.

Matt Karnes of GreenWave Advisors, a New York cannabis consultancy, believes the growth in patients reflect increased patient awareness and the addition of more doctors throughout the state who are authorized to recommend MMJ.

But Karnes added this growth is “pretty dismal relative to the potential market size.”

Regulators and lawmakers are hoping to improve the situation. They plan to move forward with several changes, including moves to:

While many in the industry view these proposed changes as business-friendly, they may not be enough to reassure existing business owners.

In a May interview with Marijuana Business Daily, Hillary Peckham, COO of Etain Health – a licensed New York MMJ business – said Etain would need to see between 1,500 and 2,000 patients per month to cover costs.

The latest state data indicates approximately 40% of registered patients visit a dispensary each month, and with five licensed businesses splitting this group of patients the pool will need to grow much larger before companies reach a point of sustainability.

Bloomfield Industries – another licensed New York MMJ business – apparently is already feeling the financial squeeze. According to a recent Politico article, the company stated that it’s facing “financial constraints,” forcing executives to skip payments to vendors and entertain offers from a range of investors.

While the future of New York’s MMJ program is uncertain, it’s clear that the status quo will not suffice for current business owners looking to turn a profit.