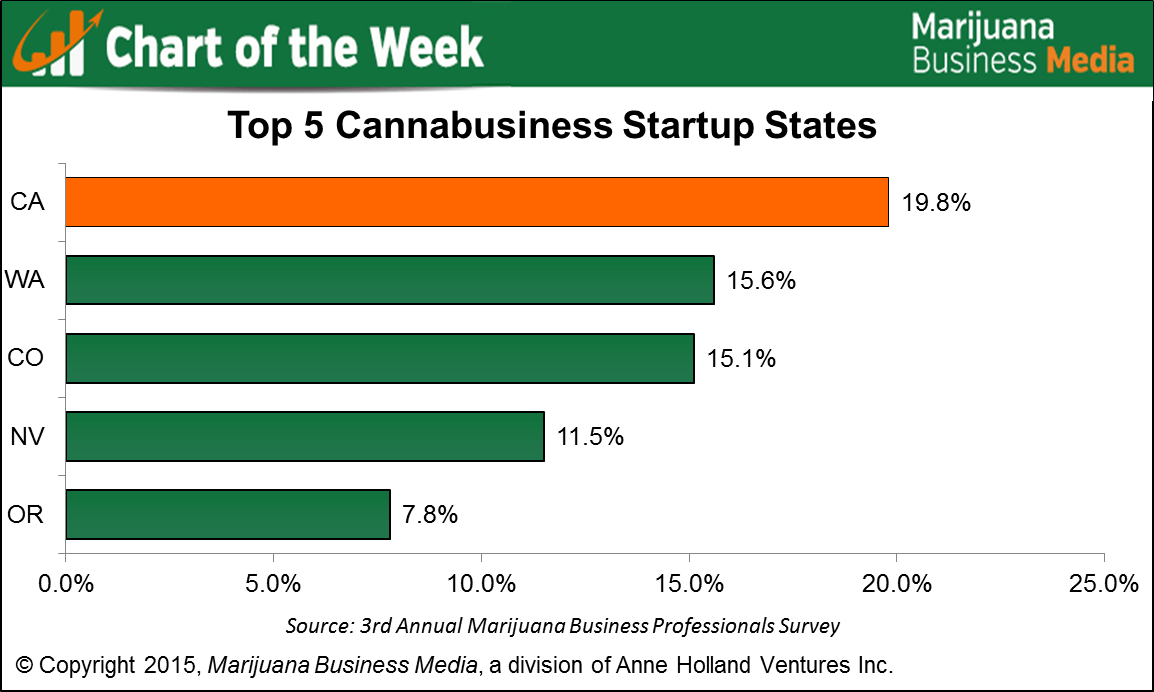 California has climbed over several other powerhouse cannabis states and now ranks as the most popular market for entrepreneurs starting marijuana companies, despite an unstable business climate fostered by a lack of statewide MMJ regulations.

Nearly 20% of entrepreneurs currently in the process of starting cannabis-related companies are located in California, according to the 3rd Annual Marijuana Business Professionals Survey.

The results are vastly different from last year, when Washington State held a commanding lead over every other state. In the 2014 survey, 21.3% of respondents planning to launch cannabis companies were eyeing Washington. Colorado came in a distant second (8.9%) last year, followed by Illinois (8.3%), Massachusetts (8.2%) and California (7.5%).

This time around, California edged out Washington State, where 15.6% of respondents launching marijuana companies are based.

Other popular states for entrepreneurs include Colorado, which opened the door to competition in its recreational market last fall; Nevada, which is moving forward with its MMJ program; and Oregon, which recently paved the way for state-licensed medical cannabis companies and is in now setting up a framework for rec sales.

The survey – spearheaded by Marijuana Business Media, the parent company of Marijuana Business Daily – was conducted online between Jan. 22 and 29. Of the nearly 800 respondents, 205 indicated they are currently in the process of starting cannabis companies, including everything from dispensaries, retail stores and grows to infused products companies and ancillary firms.

ADVERTISEMENT
The fact that California is a hotbed for startup activity is somewhat surprising given frequent turbulence in the market. However, some cities have paved the way for locally licensed dispensaries and grows, creating new business opportunities.

The state has also seen a surge in delivery-related services. And more mainstream investors in California – including those in Silicon Valley – are pumping money into the cannabis industry, fueling startup growth in the region.

At the same time, California has benefited from a drop in business opportunities elsewhere. A year ago, entrepreneurs were flocking to set up businesses ahead of the launch of recreational marijuana sales in Washington State. Startup activity there has naturally lessened since sales began last summer.

Massachusetts was also hot a year ago as entrepreneurs laid down plans to apply for dispensary and grow licenses. This year, however, it didn’t even make the top 10 states for planned startup activity. The state’s MMJ program has experienced numerous delays, and the first dispensaries have yet to open.

Startup activity in general is strong around the country as new markets emerge. More than 25% of all respondents to the survey said they are currently in the process of lanching cannabis companies.