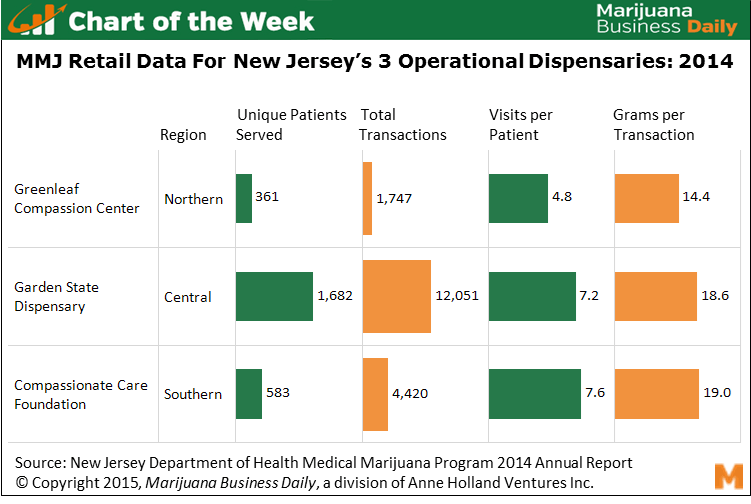 Entrepreneurs in heavily regulated medical marijuana states can learn a lot by looking to New Jersey, which has one of the strictest and most limited MMJ programs in the country.

The report reveals that were wide differences in patient traffic and sales volume last year.

The three dispensaries, all of which were open throughout the year, are located far enough away from each other that they’re not really direct competitors, as each had an ample local patient pool to tap.

Also worth noting is that New Jersey’s approximate 3,500 licensed patients are required to register and shop at just one dispensary. So the Garden State Dispensary in the central part of New Jersey, for instance, is not taking customers away from the other two dispensaries in the state.

What lessons can be pulled from these sales patterns that might apply to entrepreneurs in other states?

#1. Just because you open your doors in a state with limited competition doesn’t mean you’ll hit sales benchmarks. Your operational skills – including inventory management, pricing, and marketing to patients and their doctors – are critical.

#2. Not all registered patients bother to buy from dispensaries. Roughly 25% of New Jersey’s patients didn’t register to shop anywhere last year – even though home cultivation is not allowed. Don’t build a business model assuming you’ll be able to convert all patients in your area to customers.

So don’t build assumptions into your business plan that you’ll sell the maximum allowable cannabis to your customers. This may be possible in coming years as more doctors encourage their patients to take advantage of medical marijuana, and as more patients start to think of MMJ as a normal part of their healthcare. However, currently it’s not happening in new MMJ states.

Marijuana Business Daily expects New Jersey’s market to continue growing considerably in 2015 and beyond. Three additional dispensaries are expected to open their doors over the next year. And patient numbers, which doubled last year, will likely continue to grow.

MBank to Close All Cannabis Accounts