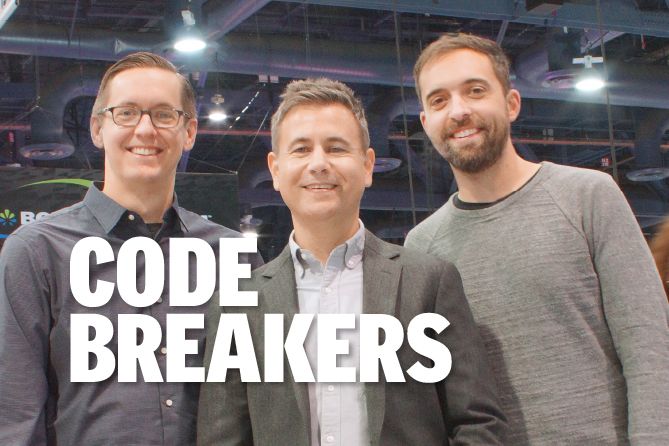 At their core, Cy Scott, Scott Vickers and Brian Wansolich are techies who like to code software. But the three friends have managed to capitalize on that talent to break into the marijuana industry and build two notable Seattle-based ancillary businesses:

How did the trio succeed?

Before launching both companies, Scott, Wansolich and Vickers diligently researched the cannabis industry. Their mission: Spot opportunities ripe for commercialization.

Once they identified a promising niche, the three relied on a variety of strategies to build Leafly and Headset into respected brands. Those strategies included:

Scott, Wansolich and Vickers got their inspiration for Leafly while working in the automobile industry.

Scott and Vickers met about 20 years ago as computer science majors at California State University, Fullerton. They ended up working together at Kelley Blue Book, the California company that provides a popular automotive pricing guide and vehicle reviews. There, the pair met Wansolich in 2006.

Riffing off their engineering talents and a mutual interest in cannabis, the three discussed how to parlay their software skills and affinity for marijuana into an online strain search and review business. They researched online review sites and found the existing crop came up woefully short.

“There wasn’t much in terms of searching for strains, or at least nothing consistent. There were a lot of review sites or blogs and old (chat) forums,” Vickers said.

The three spotted a market opportunity – and Leafly was conceived in Orange County, California. The company later relocated to Seattle.

From the start, Scott, Wansolich and Vickers reckoned that rival entrepreneurs who had similar ideas probably lacked their software engineering skills. The upshot: Those firms would have to shell out considerable bucks to hire engineers. That gave the Leafly founders an immediate cost advantage over rivals.

“On the consumer side, we knew we wanted to make it super fast and search-engine friendly, which at the time was an area we capitalized on,” Vickers said.

To get Leafly up and running, the three worked nights and weekends while they continued to earn their paychecks at Kelley Blue Book.

While developing Leafly, the three paid close attention to the website’s design, deciding against using images of cannabis leaves and other dated clichés. Instead, they created the now recognizable periodic table-like symbols and color coding scheme that set Leafly apart from competing review sites.

“Paying attention to nice design at a time when cannabis sites with nice design were hard to find was key,” Wansolich said. “Design can make or break a site. If Leafly was black and green with pot leaves, it wouldn’t have the same appeal.”

The design move wasn’t just a personal decision. It was a strategic gamble that droves of MJ consumers would prefer a design that normalized cannabis consumption and didn’t use the stereotypical images that had long stigmatized the plant.

“It seemed taking a mainstream approach would help differentiate ourselves. The landscape was just a glut of older stoner culture,” Wansolich said. “We wanted to elevate it and help people who were kind of like us, folks we knew with office jobs and haven’t stopped their herb intake. … It was an audience that needed to be serviced.”

After its launch in 2010, Leafly attracted a rising flow of visitors. The company also landed dispensary customers in California that agreed to pay for advertising and visibility benefits on the site.

To grow, Scott, Wansolich and Vickers concluded they would need outside investors.

They began pitching investors in California but struck out because, in their view, potential funders considered marijuana too risky based on the plant’s illegal status at the federal level.

Eventually, the site caught the eye of Privateer Holdings, the cannabis-focused private equity firm in Seattle. In 2011, Privateer made Leafly its first acquisition for an undisclosed price.

“We had very similar visons on how the cannabis market was heading,” Scott said. “Once Privateer acquired us, we were able to utilize the financial support to build Leafly. We were able to operate it and build it within the Privateer organization and scale it up, and we stuck around for almost four years after the acquisition to get it to a really good spot.”

Spotting Their Next Market Opportunity

In 2015, Scott, Wansolich and Vickers left Privateer and Leafly knowing that their next business also would be in the cannabis industry.

“We knew (the industry) would continue to need services that we could be able to provide. It was just a question of finding what service,” Scott said.

In doing their market research, the three concluded the industry had matured considerably since Leafly’s launch in 2010. In 2014, for example, Colorado and Washington state rolled out the nation’s first full-scale recreational cannabis markets. Six other states and Washington DC legalized rec by the end of 2016.

“When we started in 2010, it was cannabis out of a jar, and you really didn’t know the source. Edibles meant brownies in Ziploc bags and branded packaged cannabis edibles were pretty much nonexistent. Now the landscape is very different.”

Scott, Wansolich and Vickers also reasoned that more sophisticated business operators would translate into new services to help these entrepreneurs build their companies.

Industry data, in particular, was in short supply.

“We decided that helping businesses with data and analytics is what the industry needs, and that was the motivation for creating Headset,” Scott said.

To determine the type of data businesses would need, the trio did additional market research. They chatted up retailers, learning how they run their businesses, what numbers they look at, how they measure their company’s fortunes and what problems needed solving.

“That’s the extent of our market research, just talking to customers,” Scott said. “The biggest driver of new product features is what we’re hearing from our customers.”

Today, Headset gathers sales data from roughly 300 retailers and 100 product manufacturers that use the company’s software. That data is then aggregated, crunched and repackaged to provide customers with valuable market intelligence. For example:

As a result, it was easier finding investors for Headset than it had
been for Leafly. Moreover, the three had established a successful track record: Leafly had morphed into a well-known website.

“It definitely made people open up their books to get us on their schedules to talk to us about investment money,” Wansolich said. “Because this was our second go-around and the first was with Leafly, we had a lot easier time getting money than most other entrepreneurs.”

To date, Headset has raised nearly $5 million, including a roughly $1 million angel round in which Poseidon Asset Management in San Francisco and Anslinger Capital in Seattle participated, and a more recent $2.5 million pre-Series A round in which Salveo Capital in Northbrook, Illinois, and Hypur Ventures in Scottsdale, Arizona, contributed.

In 2018, probably by the second quarter, Scott said, Headset aims to raise between $5 million and $10 million through a Series A round.

Headset intends to use the money to hire staff, expand its customer base and establish a physical presence in new markets. Besides its home base of Washington state, Headset serves clients in every adult-use state (except Alaska) and Washington DC. The company also has clients in many medical cannabis states, including Arizona and Illinois.

“But fast forward a year or so and we should have a footprint most everywhere,” Scott said.

The expansion will mostly focus on California, Nevada, Arizona and New Jersey, if that state goes recreational, Scott said, as well as Canada.

“Markets like California are very important to us, so we’re investing a lot of resources in that market to get ahead of 2018 and to be able to support businesses that are operating now,” Scott said. Headset should have a presence in Canada by early 2018, he added.

Establishing, maintaining and leveraging relationships have been critical to the success enjoyed by Scott, Wansolich and Vickers. When starting Headset, their earlier work with Leafly gave the trio a ready trove of potential customers in the form of product manufacturers and retailers. The three were able to convert those businesses into Headset clients.

“That really helps when you have your second endeavor and you can leverage a lot of those relationships. That really helped fast-track us,” Scott said. “Coming from Leafly we have a similar customer base – the retailers, the product manufacturers, spending all those years with them and really listening to them and understanding their pain points and their needs.”

Those relationships also helped the Headset founders understand the problems those companies faced while building their businesses.

Scott said that knowledge “really helped guide us in identifying what kind of services we needed to provide. … So having that existing relationship, having that dialogue with previous customers goes a long way with this second project.”

Those relationships also were good for Headset’s bottom line. “It was really valuable to be able to bring some sizable early accounts to Headset that we might not have been able to get if we didn’t have the background or relationship from Leafly,” Scott noted.

How were those relationships nurtured in the first place?

At Leafly, Scott, Wansolich and Vickers created an executive advisory board made up of industry leaders who also were Leafly clients. The board, Scott said, “provided a mechanism for us to get feedback on the Leafly system.”

This board also led to many relationships that went well beyond the standard business-client relationship. Consider LivWell, one of the largest retail chains in Colorado that also became one of Leafly’s early customers. Plus, it was a member of the advisory board.

The two companies developed a strong relationship, Scott said. LivWell was not just a major account, but a source of advice and feedback.

When they launched Headset, the three founders went to LivWell, introduced the service and described the types of problems they wanted their software to solve. LivWell also became a beta partner to test the software. LivWell executives, for their part, outlined their needs and the issues they encountered.

“They gave us feedback on the types of dashboards and reports they were interested in utilizing. As they operate at such a large scale, listening to their feedback was critical for building a system that could meet the demands of the future of the cannabis industry, which will undoubtedly include larger-scale operations,” Scott said.