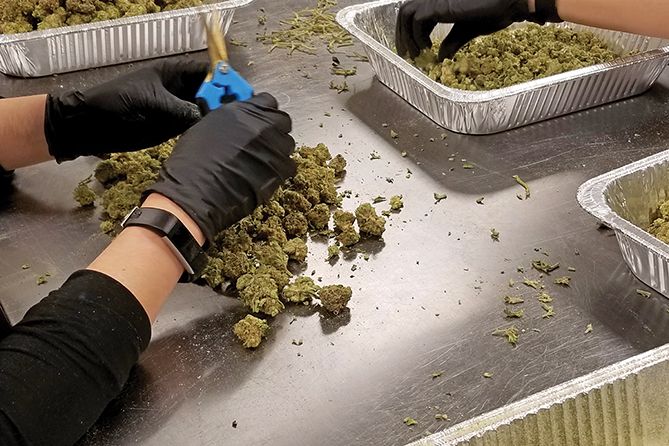 With a harvest cycle that yields up to 110 pounds every two days, Denver-based Medicine Man finds it needs temporary workers daily. In fact, temporary—or gig—workers consistently make up 30% of Medicine Man’s staff.

The gig economy has permeated American culture as upstart companies such as DoorDash, Lyft and Uber and others offer people a way to make money whil e providing services consumers are demanding. Roughly 41 million Americans work as consultants, freelancers, contractors and temporary or on-call workers, generating $1.28 trillion of revenue for the U.S. economy last year, according to the State of Independence in America Report released by Virginia management services firm MBO Partners.

That gig workers are plentiful is a win for Medicine Man and other cannabis companies that use temporary staff. These workers typically are available through agencies focused on providing labor to the cannabis industry.

Employers may pay a premium hourly wage to the agency compared to what they pay a full-time employee, but they’re not paying workers’ compensation, handling payroll or paying payroll taxes for those employees. It’s also a flexible workforce: In addition to being hired when business is strong, these workers can be let go when business slows. On the flip side, employers can transition talented temps into full-time employees.

Medicine Man uses temporary workers for low-level jobs such as schwazzing, an intense form of defoliation that involves removing many fan leaves from a plant to allow more light to pass through to the buds.

“We have them do the repetitive work,” said Joshua Haupt, Medicine Man’s chief revenue officer and a cultivation guru. “We typically don’t use them for the detail-oriented work.”

Turning to a Temp Agency

Haupt’s temp agency of choice is Denver-based CoLove Cannabis Solutions. Nine people from the cannabis-focused recruitment firm can do the same work before lunch that it takes 12 people from another agency an entire day to complete, he said.

“They’re the smallest but hands-down the best,” Haupt said. “They care about cannabis, and they care about the project they’re working on that day.”

Positions for which Haupt won’t use temporary workers include making a nutrient mix, watering and transplanting clones. He also won’t use temp workers for any task that requires more than two hours of training, because he can’t invest that kind of time in an employee who isn’t on staff.

Medicine Man has a “do not return list” that instructs CoLove not to send certain workers back to the company. But it also has been so pleased with some temps that it will bring them on as full-time workers.

“I look out for passion, and I look out for people who care about what they’re doing,” Haupt said. “We’re big on top-shelf, and I need to have that product really cared for the whole way through.”

Sweet Grass Kitchen, a Denver-based bakery that produces and distributes cannabis-infused edibles, uses temporary workers if someone leaves the company and during the busy times of year—typically spring, summer, ski season and the unofficial marijuana holiday known as 4/20, said Lauren Finesilver, the company’s director of operations and executive chef. Temp workers help with packaging, harvest and operational work. Finesilver’s agency of choice is Shear Solutions, which is based in Denver and Portland, Oregon.

“We don’t have a whole harvest staff, so we bring them in when we need them,” she said. “They understand our business and try to send us the same people over and over.”

Sweet Grass has specific tasks it allows temporary workers to do.

“They wouldn’t be mixing our cookies, but they might help us put products into packages and put labels on packages. So they would actually be handling the product,” Finesilver said.

Like Medicine Man, Sweet Grass also has a do-not-return list to prevent Shear Solutions from sending a worker who didn’t work out the first time back to the company.

“We’ve had people cutting branches off (plants) that don’t need to be cut off, people being rude,” Finesilver said. “They’re just not part of your culture.”

San Diego-based Mankind Dispensary is more likely to hire a temporary office worker such as an accountant or a human resources director than it is a lower-level staffer to work in its dispensary, Chief Operating Officer Vera Levitt said. Mankind typically hires temporary office workers when a full-time employee is out on medical leave. The extra help alleviates the additional workload the rest of the staff assumes when someone is out.

“They provided me with an excellent temp who hit the ground running,” Levitt said. “They did all the preliminary interviewing and found someone who could jump right in and handle every task.”

The recently launched CannabizTemp is an offshoot of the cannabis-focused executive search and staffing firm CannabizTeam. The companies are currently focused on serving California cannabis companies but plan to expand across the United States.

“As the industry matured, more and more clients were looking for people to work on a project basis,” said Liesl Bernard, chief executive of CannabizTeam and CannabizTemp. “We saw the need in the industry to also provide our clients with temporary workers.”

CannabizTemp focuses on working with cannabis companies looking for people to perform tasks on a contract or consulting basis. Many of those types of workers want the flexibility to work on projects for a specific amount of time. They range from senior-level professionals who want to select the projects they work on to students testing the waters to determine whether they want to join the cannabis industry.

“The temporary employee or consultant can be for seasonal purposes, (a) project-based need that increases head count for a short period of time, vacations, leaves of absence, operational or licensing projects,” Bernard said. “All backfill a position as an interim solution, while CannabizTeam sources for talent or the client identifies their own candidate.”

CannabizTemp handles background checks and following up with references. The firm also conducts multiple interviews with candidates before sending them to its client companies. And it’s not just seasonal workers or lower-level jobs. CannabizTemp will provide interim executives such as a CEO or chief financial officer for companies while they search for the right person for a permanent job.

“We make sure each person we place has the skill set the client needs and fits the culture,” Bernard said. “It’s a bit more of a white-glove service.”

Denver-based cannabis industry recruiting firm Vangst launched its Gigs online platform in October after recognizing that companies must fill many positions on a temporary basis. Rather than treat its stable of temporary workers as contract employees who fill out IRS Form 1099, Vangst has them fill out IRS Form W-2, which puts them on its payroll, said Carter Davidson, the company’s chief revenue officer.

Vangst provides cannabis companies with workers in California, Colorado and Washington state and is about to launch its service in Nevada. It does not provide services in Arizona, where badges are tied to license holders. Before they can get a badge, workers must have an offer letter from an employer.

“We pay our workers and bill the client,” Davidson said. “There’s a markup for our services—temp labor across all industries does cost more. The hourly rate is higher than if you brought someone on full time. We assume all the liability—workers’ comp, payroll taxes, recruiting and screening.”