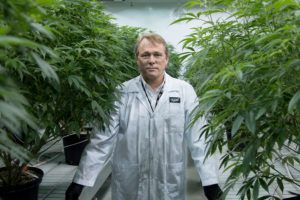 Constellation will acquire 104.5 million shares directly from Canopy Growth for CA$48.60 per share, giving the New York-based company – which owns, distributes and markets 100 beer, wine and spirits brands, including Corona and Robert Mondavi – 38% ownership after existing warrants are exercised.

It is thought to be the first time BofA Merrill Lynch has financed a cannabis deal.

It is also the largest investment in any cannabis company to date and will “immediately” put CA$5 billion in the bank for Ontario-based Canopy after the deal closes, the company said in a statement.

Constellation also will receive 139.7 million new warrants, which, if exercised, would increase its ownership in Canopy to more than 50% and provide at least an additional CA$4.5 billion for the diversified marijuana company.

Canopy said it plans to use the cash to build and acquire key assets to establish global scale in the nearly 30 countries pursuing a federal medical cannabis program.

The money will not be invested in additional cannabis cultivation assets in Canada, Canopy said.

Constellation will get four directors on Canopy’s seven-member board.

Constellation – one of the biggest alcohol businesses in the world – first entered into a strategic relationship with Canopy last October with a CA$245 million, 9.9% investment in Smiths Falls-based Canopy.

Analysts expect the latest deal to spur mergers and acquisitions across the sector.

“When Canopy did the original deal with Constellation, that set off a domino effect of others looking to do beverage deals, so it wouldn’t surprise me if this also sets off another round of companies looking for investment outside the LP (licensed producer) sphere, whether it’s beverage, pharma or tobacco,” said Matt Maurer of Toronto-based Torkin Manes’ cannabis law group.

“As the big players get bigger, other players will look to keep pace. Medium size LP will be looking to get together to merge and maintain where they are in the food chain,” he said.

Flush with cash and easy access to capital, Canadian cannabis companies have gone on a buying spree this year, with 48 deals recorded in the first half for a total disclosed value of CA$5.2 billion, according to a recent report by PwC Canada, which attributes the spike in activity and value to the legalization of adult-use cannabis on Oct. 17.

The latest Canopy-Constellation deal doubles that.

“And while adjacent industries – e.g. alcohol – have been relatively slow to enter the cannabis industry, this news may expedite their entry as it offers something they have never had access to in Ontario—retail sales,” the report states.

“I believe the involvement (of Goldman Sachs and Bank of America Merrill Lynch) signals more attention to the sector.”