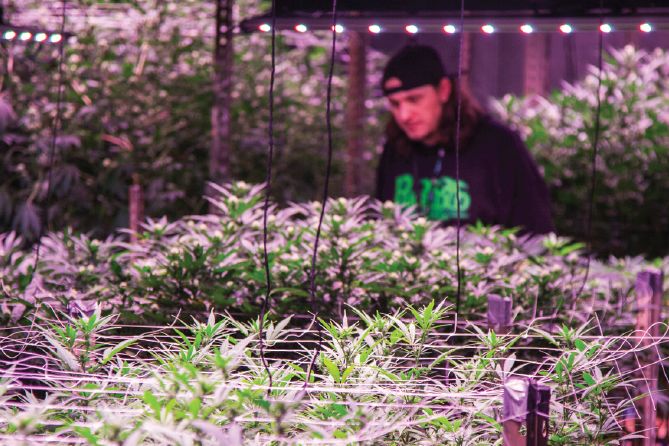 Pakalolo Supply Co. made history on Oct. 28, 2016: The Fairbanks, Alaska, cannabis business conducted the state’s first legal recreational marijuana sale. But in the months that followed, the vertically integrated company faced a challenge that businesses in young marijuana markets often struggle to overcome: overwhelming demand in the face of limited supplies.

“The name of the game that winter was keeping the doors open,” said Pakalolo co-founder Keenan Hollister.

“Our cultivation practices work really nicely for a vertically integrated model, and it’s only going to get better as we expand,” Hollister said.

Pakalolo’s cultivation strategy has relied on natural farming techniques and a transition from high-pressure sodium (HPS) lights to more energy-efficient, light-emitting diodes (LEDs). That approach has presented its own challenges – namely, the methods Pakalolo uses aren’t widespread in the cannabis industry. So the company doesn’t have a standard road map to follow and must instead rely on trial and error.

“We see a lot of pretty high environmental-impact companies and we want to get away from that standard blueprint of a cannabis business and be something different, something more sustainable,” Hollister said. “It’s challenging – we could have followed a blueprint and known what we’d get in the end. But we chose this method, to develop a unique product in a way we wanted to do it.”

It requires a monthly trip to a Fairbanks grocery cooperative, where cultivators buy seasonal herbs and produce, including bananas, pineapples, mangos, papayas, spinach and kale.

Cultivators chop and jar the produce with brown sugar to make fermented fruit juice. They also use healthy leaves from harvested cannabis plants and kale or spinach to make fermented plant juice. The fermentation process breaks down the produce’s nutrients and enzymes, and spoonfuls are added to the daily water supplies. The fermented plant juice and fermented fruit juice contain plant growth hormones and micronutrients that stimulate the growth of beneficial microorganisms and increases nutrients available in the soil.

“Those are the building blocks for our plants,” Hollister said. “Everything we do, we do to treat the soil rather than the plant. Everything we put in to the soil is all-natural and healthy – good in, good out.”

Besides saving money, another benefit of using Korean Natural Farming techniques has been higher terpene counts in Pakalolo’s cannabis, Hollister said – up to 7.75% terpenoids in a strain compared with an average of 1%-3%, with 3% being an impressive high.

“We’ve noticed our terpene counts have gone through the roof,” Hollister said. “In some cases, the terpene numbers from our bud are the numbers we’re seeing in concentrates.”

For example, Pakalolo’s Alaskan Blueberry – a CBD-rich strain that typically tests at around 8% THC and 12% CBD – notched a 7.75% terpene count when it was last tested, which is higher than the cannabis and most concentrates sold in Alaska, Hollister said.

‘Living Ecosystem in Each Soil Bed’

Early in its cultivation strategy, Pakalolo experimented with growing plants in individual reusable, breathable plastic bags made from recycled material that sat on 4-foot-by-8-foot tables. But the team realized cultivators were spending too much time moving the plants into larger bags and recharging the soil with new nutrients. It also took weeks for the nutrients to break down and benefit the next round of plants that were placed in the soil.

That’s when Pakalolo’s team discovered “True Living Organics: The Ultimate Guide to Growing All-Natural Marijuana Indoors” by the cannabis guru known as The Rev. The book inspired Pakalolo’s no-till farming method and is required reading for the company’s growers.

The no-till method is exactly as it sounds. After the cloning stage, plants are moved to 4-foot-by-4-foot soil beds that are approximately 2 feet deep. Nine plants live in each bed through their vegetative and flowering stages, and the soil isn’t tilled.

The plants grow in a fungi-dominant soil, alongside rye grass and clover, with earthworms providing additional nutrients. When the plant is harvested, it’s cut at the soil level and the root mass remains.

“There’s a living ecosystem in each soil bed,” Hollister said.

The no-till method, coupled with the use of LED lighting, has cut five to six days off the flower time, from start to finish, Hollister said. That allows his team to harvest the crop sooner.

According to federal data, Alaska has some of the highest energy costs in the nation, with businesses there paying anywhere from 70%-120% more for electricity than the average U.S. company spends.

To be as energy- and cost-efficient as possible, Pakalolo is in the process of transitioning from Illumitex lighting to Fluence Bioengineering’s SPYDRx PLUS, a full-spectrum LED unit designed for close-proximity, controlled environments.

Through online research, Hollister discovered that LED lighting – versus 1,000-watt HPS technology – would slash Pakalolo’s energy costs by more than 40%.

As Pakalolo has transitioned to using Fluence Bioengineering’s lights, it has experimented with using the SPYDRx PLUS systems in conjunction with the Illumitex lighting. The Pakalolo team has arranged the lights in a checkerboard fashion, and Hollister has observed more growth on the sides of the plants directly exposed to the SPYDRx PLUS units.

In some strains, he said, cultivators have seen more than a 50% increase in yield from previous harvests, and each strain has set new yield records since the lighting switch. Hollister attributes this to the LED lighting – as well as Pakalolo’s holistic cultivation strategy and improvements in air flow throughout the grow.

Pakalolo’s team installed fans on the floor of the aisles near the back of the grow to carry air up from near the ground and blow it back through the canopy. Team members also installed ducts to bring in cold Alaskan air from outside that can be used most of the year. And they added air-conditioning units to have year-round control of the temperature in the rooms.

“Each strain is slowly improving,” Hollister said. “We’re by no means experts or masters, but we’re willing to evolve and we’re constantly looking for ways to problem-solve and be as efficient as possible so we can grow healthy, natural cannabis.”