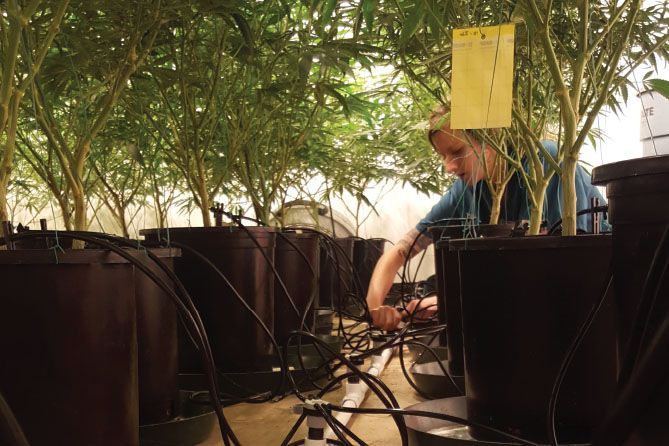 The $550 that Giving Tree Wellness in Phoenix pays on average for water each month may seem like a drop in the bucket compared with the nearly $20,000 it shells out for electricity.

But the company, which both grows and sells medical marijuana, is constantly looking for ways to push its water bill even lower.

Giving Tree’s CEO, Lilach Power, is from Israel originally, and she now lives in Arizona – two places where water is precious. So she considers conservation a top priority, particularly as the company undergoes an expansion project that will significantly boost its water use and costs.

Giving Tree and other cannabis cultivators across the nation are increasingly exploring and implementing water-conservation strategies to lessen their impacts on the environment and lower their expenses. Top strategies include everything from drip irrigation and hydroponics to owning a well, plus harvesting water from the air through dehumidification.

These methods provide the added benefit of helping companies develop a “good neighbor” reputation and gain the peace of mind that comes with being a high-minded corporate citizen.

“We make sure we are responsible growers and don’t just dump nutrients and water into the city pipes,” Power said. “We make sure we have as little or no runoff as possible.”

Giving Tree has a 10,000-square-foot indoor grow in north Phoenix with 1,100 plants in pots and organic soil as well as coco. The plants collectively require about 700 gallons of water per day, with larger ones consuming about a liter each daily.

Because of the company’s sky-high electricity bill, it is expanding by building a greenhouse about two hours north of Phoenix, where power costs are cheaper. The new facility will have about 30,000 square feet allocated to growing flower and another 15,000 square feet dedicated to propagation, genetics and vegetation.

While Giving Tree’s grow space is quadrupling (the plants will also take a direct hit from the hot Arizona sun), its water use will increase by only about 1.5 times. That’s thanks to a variety of water-saving strategies – two of which the company already uses at its indoor grow site in north Phoenix, plus some new ones. The combination of these strategies should help Giving Tree keep its water costs in check.

Inside the north Phoenix grow site, Giving Tree uses an automatic drip irrigation system where water circulates slowly into the plants over the course of the day. The system also has instruments that measure the moisture and nutrient levels in individual pots three times per hour. If a plant is found to have sufficient moisture, the irrigation system won’t deliver additional water to that plant.

That is more efficient than dumping large amounts of water into the plant periodically, which may result in excessive runoff.

“It’s not a huge expense but it’s a one-time expense,” Power said. “If you look at the agricultural world, there are plenty of other people that do that. We’re not reinventing the wheel. We’re just bringing it to the cannabis industry.”

At the new greenhouse, Giving Tree also plans to build a well, something that grower Shawn DeNae of the Washington Bud Company can relate to.

DeNae started her cultivation business in Seattle in 2012 and paid about $350-$400 per month in water bills. But the expenses of an urban grow site coupled with the desire to live in a more rural setting compelled DeNae and her husband to look for a new space. After scouting locations, they found a site that met their needs and has two private wells.

Assuming the wells don’t run dry, DeNae has a ready supply of water at little or no cost. DeNae’s husband, who is in construction, was able to connect the well to the grow site for less than $5,000, she said.

“It was definitely by design,” DeNae said about her decision to find a grow site with a private water source. “The fact that we have our own private water rights on this property is a real coup.”

DeNae’s current site of about 100 plants is approximately double the size of her previous Seattle site. Had she stayed there and doubled that space, her monthly water bill would also have doubled to $750 or $800 – versus her current situation, where she pays almost nothing by primarily utilizing private well water.

Sativas, in her experience, tend to demand more water than indicas.

“The sweet spot is to give them just enough water so that there is little to no runoff.”

Currently, DeNae waters plants about every five to seven days during their vegetative stage and every three to four days in their flowering stage.

While DeNae avoids runoff, she’ll make an exception near the end of flowering when she wants to flush nutrients from the soil, which requires “gallons and gallons” of water.

“Then, when the plants at the end of their life are taking up just nice clean well water, the resulting product is much smoother, sweeter, flavorful,” DeNae said.

To collect the runoff, she uses drain tables her husband built.

If you can’t get water out of the ground, then you can get it from the air. Cannabis plants not only exist in environments with at least some humidity, they also emit their own humidity.

Cannabis consultant Greta Carter – who is working with two companies building grow operations in California’s Desert Hot Springs – estimates she can get 55 pints of water daily through dehumidification at the grow sites, which together total nearly 40,000 square feet. The water can then be used for the plants.

Carter’s team plans to go hydroponic at both sites. Why? Hydroponic methods use less water than any other options because the water can be recirculated.

Under the planned system for the two sites, the water will begin in a fertilization tank at one end of the grow, feeding the plants as it flows through their pots before ending up in a holding tank at the other end of the facility. The water is then cleansed of the excess nutrients using reverse osmosis and can be reused.

“We can run pretty close to zeroing out our water by repurposing it,” Carter said.