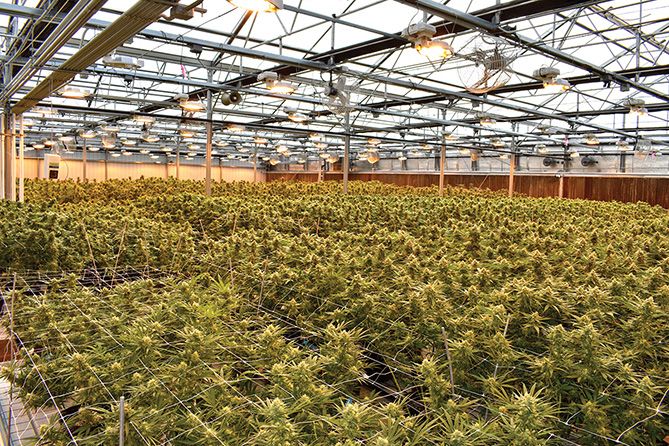 Nothing beats having your own construction crew at the ready. And your own real estate investment business—not to mention a scientific research unit, too. Just ask Tempe, Arizona-based Harvest Health & Recreation.

Harvest has a do-it-yourself mantra when it comes to building out its geographic footprint or funding research into medical marijuana. Executives at the vertically integrated MMJ operator, for example, learned they must rely on themselves to ensure the company’s cultivation facilities are designed and built correctly—and outfitted with the proper equipment to grow a quality crop.

Founded in 2011, Harvest has an in-house construction team that meets daily to pore over plans for the facilities the company is building across the 12 states where it holds medical cannabis licenses. Two of Harvest’s founders, who previously ran a company that performed design and building work, lead the construction team.

“We’ve become very good at facility design and getting them built the way we want them,” Harvest CEO Steve White said. “You have to do that so you can control the (growing) environment.”

Harvest owns more than 60 cannabis licenses with a domestic footprint that includes real estate, equipment and other assets in 12 states stretching from Florida and Maryland on the East Coast to California on the West Coast.

Currently, the company has operations—including cultivation, manufacturing and retail facilities—up and running in Arizona, California, Colorado, Florida, Maryland and Pennsylvania. It has facilities under construction in Arkansas, Massachusetts, North Dakota and Ohio.

“We will be growing cannabis in 10 to 11 states by the end of 2019,” White said. “That does not include the stuff we may win in the interim—just existing licenses.”

Over the course of the six years the company has been growing marijuana, Harvest executives have learned that greenhouses produce higher-quality crops than outdoor grows. They’ve also learned that constructing a greenhouse is cheaper than building out an existing warehouse facility for cultivation.

But one of the biggest lessons Harvest executives have learned?

Don’t rely on vendors and consultants to design and construct the company’s facilities correctly. For example, Harvest purchased a greenhouse from a large manufacturer in 2014 for its Camp Verde, Arizona, cultivation facility.

Despite buying the “newest, coolest model,” the company got a greenhouse with a heating element that produced light, preventing its MMJ from receiving the light deprivation needed to better control when a plant begins to flower.

“We changed out the way that place was heated,” White said. “We knew then to examine in future facilities how a greenhouse vendor was going to heat it in the winter time. It also causes you to look at other systems the same way. It causes you to go back and verify all sorts of things.”

When building and equipping its facilities, for example, Harvest closely examines everything from lighting and humidification to airflow and nutrient dosers.

There is no one-size-fits-all formula for building out Harvest’s cultivation facilities, White said. In Massachusetts, for example, the company is converting an existing greenhouse into a facility where it can grow cannabis. But in Arkansas and Ohio, the company is building new greenhouse facilities from the ground up.

To fund its various build-outs, Harvest went public in Canada in November. It began trading on the Canadian Securities Exchange under the ticker symbol HARV.

“We went public because we are engaged in a land grab, and we didn’t want everyone to have an advantage over us,” White said. “It provides us with currency to make acquisitions.”

The company has aggressive expansion plans for this year. In December, Harvest agreed to form a joint venture called Aina We Would. The real estate investment trust (REIT) will provide funding for cannabis-related real estate purchases. That includes land purchases, capital improvements and sale-leasebacks to Harvest and other operators in the cannabis industry.

In addition to a Harvest subsidiary, Aina We Would (AWW) includes two family offices: Aina Advisors and Stadlen Family Holdings. According to a Harvest news release, Aina and Stadlen have agreed to fund or arrange up to $100 million to bankroll AWW projects they approve.

“This new vehicle—combined with the approximately $290 million we raised in conjunction with our recent debt and equity financing transactions, affiliate roll-up and recently completed acquisitions leading up to and following our listing on the CSE—gives us one of the strongest balance sheets in the industry,” Harvest President Steve Gutterman said in the news release.

“We created the separate entity because at the time we showed a dearth of cannabis research,” White said. He estimates Harvest has invested about $100,000 in research so far, and two researchers—a Ph.D. and a medical doctor—do the work voluntarily.

More scientific research into the impact of MMJ could encourage additional doctors to recommend the medicine. The institute’s first study, published in 2015 in the Journal of Psychoactive Drugs, focused on the characteristics and experiences of medical marijuana patients in Arizona.

“The original study was intended to form a basis for other people’s research,” White said.

The popularity of vaping products prompted the company to examine the byproducts produced by vaporizing cannabis oil-cutting agents. The study, published in 2017 in the Journal of Alternative and Complementary Medicine, showed that the agents commonly mixed with cannabis oil for vaping can also produce cancer-causing compounds when heated.

The Medical Marijuana Research Institute is building on its 2014 study of MMJ patients through its next research subject: insomnia. States typically don’t classify insomnia as a treatable condition for MMJ. Still, Harvest is undertaking the research because, in its first study, many MMJ patients reported success using cannabis as a sleep aid. White said the company hopes the insomnia study will reveal the characteristics in cannabis that help to create the most effective sleep aid.

Harvest also uses the information gleaned from the research efforts to guide its own product development.