By Anne Holland   A top executive from Dark Heart Nursery, one of the largest medical cannabis clone nurseries in the San Francisco Bay Area, has revealed strain sales data and the results of its recent Customer Satisfaction Survey Report exclusively to MMJ Business Daily.

Pricing turned out to be the LEAST important factor customers used to decide which nursery to purchase clones from. A Dark Heart executive explained this result surprised him initially, especially given dispensary price wars, but when you consider that each clone could generate thousands of dollars’ worth of cannabis, the difference between the Bay area’s average $12 per clone price and Dark Heart’s average $14 price for premium clones could feel negligible. 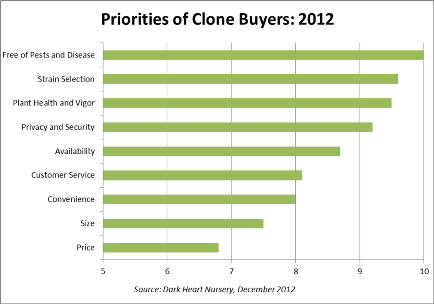 As you can see from the above chart, the biggest factor that customers considered was getting plants that are free of pests and disease. “If you’re growing several hundred or more plants, you just can’t pay a lot of attention to every single plant. You want something robust. And, many of the smaller growers are novices who want something easy to grow,” the executive said.

He also noted that clone health is critical because most cannabis cultivators “are poorly certified or educated in pest treatments or the pathogens that are out there. Conventional hothouse tomatoes growers have a pretty sophisticated program to monitor for the more important pests to catch them early, and then have treatment programs that scale up from biological controls to synthetic treatments. In the MMJ industry’s case, many growers use whatever is on the shelf at Home Depot or that they can get under the counter from a supplier. They don’t have integrated pest management programs.”

Strain selection was the second most important factor. 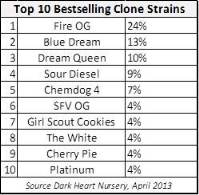 This table shows Dark Heart’s top 10 most popular strains by the percent of total clone sales each represents. Notably, the top five strains represent 63% of all sales. So, although customers like to see that you carry many strains, only a few will be bestsellers. (A similar trend happens with bookstores, where shoppers love to browse a wide selection, but mainly only buy the bestsellers.)

Although the Study did examine customer satisfaction (which proved strong), Dark Heart executives were inspired by a Harvard Business Review article to determine their ‘wallet share’. They derived this data by analyzing satisfaction scores in relation to competitors. Although the data showed Dark Heart had a 70% wallet share, the nursery is not resting on its laurels. The team has already begun a new research study, to gather a larger and broader sample of clone customers – especially those who are not currently customers.

Dark Heart’s Study was conducted formally, mainly via phone, in December 2012 to gather buying decision priorities, satisfaction and share-of-wallet data from Dark Heart customers who include professional cultivation operators from mid-northern California, as well as large clone retailers such as Harborside Health Center.

Despite a very strong business – “we never have a problem selling our stock” – Dark Heart does have two key business challenges, both related to growing even larger. The company has considered investing as much as half a million dollars in constructing expanded nursery facilities, but they are wary of the risks due to uncertainty and changeability of local regulations.

Staffing can also be a challenge. “It’s definitely hard to get good quality workers. The vast number of job applicants we get are not really qualified.” What does Dark Heart look for in nursery staff? The answer is one many industry business operators can sympathize with: a background in personal experience with the cannabis plant is not enough. “I put a priority in hiring people with a horticultural and greenhouse background in conventional agriculture. Frankly, I undervalue previous home-growing experience. Cannabis is not categorically different from other agriculture. If you have a good understanding, it transfers.”

Lastly, we asked for the Dark Heart executive’s take on the so-called seed-to-sale model now being embraced by some East Coast states such as Connecticut. He replied, “I think it’s ridiculous. We don’t do breeding in-house; we pick up strains from breeders because that’s what they do best. Growers are really good at growing flowers. We sell wholesale to our big dispensary customers who are really good at the retail end of things. Allowing people to specialize like that is really important. A lot of the outcomes of having an integrated [seed-to-sale] system are not positive. It doesn’t allow you to develop premium products, or brands, or much scale.”

He concluded, “The job of politicians is to try to allay concerns regarding public safety and quality assurance. I don’t think it’s appropriate or effective for them to regulate the nature of business models as they develop. Politicians are not sophisticated enough to project which business models are the way to go.”