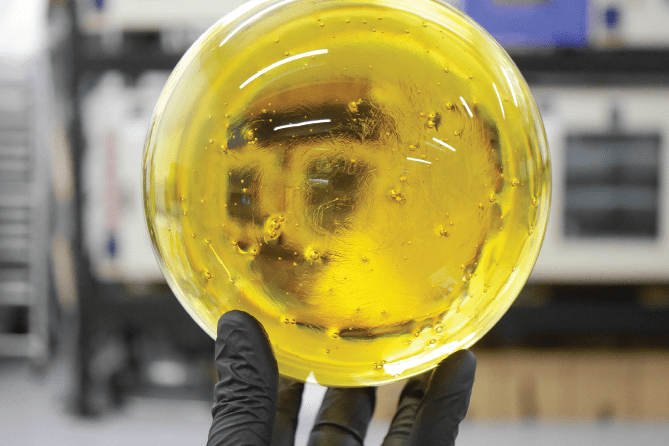 Cannabis extraction is anything but simple. It requires science, creativity and an ability to appeal to customers with high-quality products that deliver more than just a strong hit of THC.

It also requires money and patience. Companies that get into the extraction business typically invest hundreds of thousands of dollars in equipment, staff and research and development just to get started, and they must constantly refine their product lines over time. It’s an ongoing evolution, with successes and failures along the way.

An ever-present question for extraction companies, especially in the face of the exploding popularity of disposable vape pens and concentrates in general, is how to balance potency with purity while also highlighting certain characteristics of cannabis, such as its medical benefits.

Many customers tend to go straight for marijuana products with the most THC. But experts say that approach misses the point of extraction. They advise catering to customer demands in terms of potency, but also breaking new ground in purity and product attributes such as terpene profiles and CBD.

Call it a constant and creative balancing act.

The Potency Race is Over

“It’s no longer a unique selling proposition to say, ‘We’ve got the strongest, and it’s 90%.’ So what? So is the other guy’s,” Morgan said.

That means companies must pivot to other product attributes to develop new extracts that will attract customers. This includes:

Investing in lots of R&D

“Now that the race for the highest potency has been achieved, (extractors) are now focused on quality,” Morgan said. “Now, it’s moved into molecular distillation, column chromatography. We have more sophisticated testing equipment in our lab than most testing labs. And we need that just because we’re pushing the envelope.”

Matt Woolley, executive director of the Legion of Bloom in California, said his extraction operation has long since gotten to the point of producing 99% pure concentrates.

“So at that point, what’s there left to achieve?” Woolley asked.

“Where we’ve gone is to not only have that slice of the plant, but to seek other purities with other parts of the plant so we can combine those together,” Church said. “We’ve added in these other pure components that we feel are very important for different medical effects.”

OpenVape’s Morgan reached the same conclusion. His company is spending at least $1 million on new equipment in 2016 to dig into more targeted medical cannabis products that focus on specific ailments.

Still, concentrate makers face hurdles that must be overcome, including the view among many consumers that potency is king.

“We try to fight the fight,” said Lilach Mazor Power, co-founder of the Giving Tree Wellness Center in Arizona, a vertically integrated medical cannabis business. “We don’t put the potency right up front on the display because we want to explain to people about each product and each flower. But it’s safe to say that we’ve lost that fight.”

Power’s dispensary produces its own extracts and even hired a former pharmaceutical industry expert to oversee the process. While the dispensary is trying to give more weight to the variety of effects, characteristics and benefits that less-potent strains and products can have, Power said most customers still don’t care.

Instead, the Giving Tree focuses on quality and consistency to ensure its patients get a reliable experience with every batch of extracts purchased.

Many extracts companies also are dealing with issues tied to testing given the lack of industry standards and federal regulation. Results are all over the board, making it difficult for businesses to get true insight into the potency and safety of their products and determine if they may need to reassess their procedures. This is a challenge not just for extraction companies, but also for the marijuana industry at large.

“We’ve been on the market a little over a year, and the biggest issue we’ve been running into is inconsistency with regard to lab tests,” said Jimmy Makoso, vice president of Lucid Oils. “We feel like we’re chasing our own tail.”

Makoso said that for real progress to be made in extraction, there must be improved lab testing standards so manufacturers like his firm can get solid data about their product lines – particularly in the areas of potency and purity.

“The labs we work with are doing their best, and we feel confident that they’re doing their best to provide the most accurate results. But until there’s some type of standardization across labs … it’s going to be difficult to see consistency with results,” Makoso said.

Some extraction businesses are focusing their efforts on education in the hopes that consumers will begin to appreciate a broader range of what cannabis has to offer. But so far those efforts have been met with mixed success, given that many consumers and patients are still fixated on potency.

“Being people that really do like to translate the terpenes, the essences, the flavors of cannabis, it’s kind of discouraging to see (potency) be the end-all for a lot of peoples’ buying decisions,” said Ryan Abernathy, the co-founder of X-Tracted Labs in Washington State.

“We’re still just delving into the real research that proves some of this, but certain terpene profiles are known to cause calming and lower your blood pressure,” he added. ”And so you combine those with THC and cannabinoid receptors, and you get a good outcome.”

That’s the central message that Abernathy and many of his professional colleagues are trying to get across to budtenders and customers alike.

“What we really need to do is inform the consumers, and the best way to do that is through the budtenders,” Legion of Bloom’s Church said. “The people on the front lines are the ones that are selling the products to the consumer. So if they understand that it’s not just the highest potency wins, that there’s a lot more complexity to it … that’s when consumers are going to wake up.”