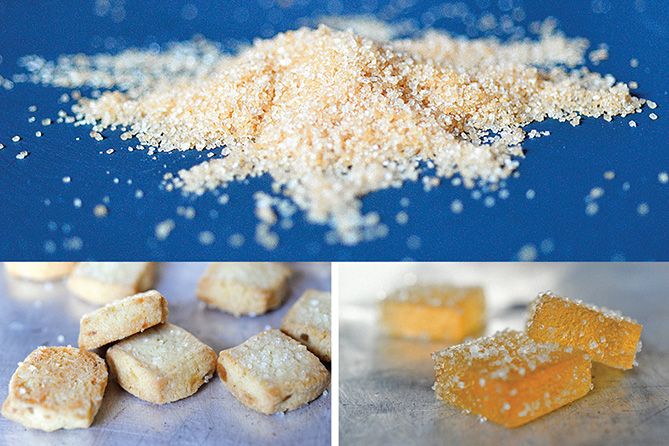 The company claims its patent-­pending granules allow Azuca’s CBD- and THC-infused sweets and cookies to take effect in two to 15 minutes, while traditional edibles can take up to four hours.

The products that make those sweets and cookies possible—and set Azuca apart from other edibles manufacturers—are fast-acting, infused sugars and syrups that can be stirred into batters, doughs and drinks. The company also has infused flakes for savory items.

“Ron Silver reinvented cannabis edibles so that it’s easier for customers to understand the effects they’re going to have on them and handle their own dosing,” said Kim Rael, Azuca’s CEO and co-founder.

The company is partnering with other manufactures to expand its brand. The startup recently transferred its manufacturing operations from New Jersey to Colorado to capitalize on more established, favorable rules for infused product makers.

According to Rael, Azuca started with a seed funding round of roughly $1.5 million. The company declined to provide financial information or projections but expects its THC products will be in at least 10 states by year-end and in Canada in 2020.

“We have patents pending on the formulations that make our edibles and ingredients fast acting,” she said. “We like to say size matters and smaller is better. If our molecule was the size of a marble, the competitive technologies out there are the size of a large beach ball.”

The three patents filed in 2017—as well as a fourth the company filed this year—center on making the cannabinoid molecules small and water friendly, or hydrophilic, so the body can quickly absorb the chemicals and start to feel the effects of CBD or THC. Azuca said part of its secret sauce is the ability to have the cannabinoids bypass the lengthy trip through the liver required by oil-based carriers.

Quicker absorption means consumers won’t have to wonder when they’ll start to feel the effects of edibles. That could help reduce the risk people will consume more CBD or THC than they expected.

Azuca trademarked its technology as TiME, or Thermodynamic individual Molecular Encapsulation. The company promises the rapid release and high bioavailability hasn’t come at the cost of taste.

“We didn’t start with a chemist. We started with a chef,” Rael said. “Ron Silver created the technology. He approached it from a chef’s perspective.”

The result of Azuca’s technology—infused syrup, sugars and flakes—can easily get lost inside the edibles that are created. Other manufacturers, for example, could be tempted to treat Azuca’s star products as simple ingredients.

When discussing the challenge of building a brand around products that will be hidden inside their final destinations, Rael pointed to two well-known brands: the sugar substitute Splenda and semiconductor chip maker Intel Corp.

Splenda is sold as a stand-alone product for those looking for a sugar substitute for their tea or coffee. But the Heartland Food Products Group—the maker of Splenda— also partners with brands that include Coca-Cola on products such as Diet Coke with Splenda, where the sweetener logo appears on the can. Similarly, Intel, where Rael previously managed a $200 million capital budget, has built a brand on ensuring consumers know their Lenovo, HP and Dell laptops are “powered by Intel” hardware.

“That’s the model we’re using with our technology,” Rael said. The company sells direct to consumers online as well as making wholesale sales of its infused ingredients to other manufacturing companies. The wholesale strategy is called Azuca Inside.

Rael estimates Azuca Inside will account for more than half the company’s revenue. Multistate cannabis operator iAnthus Capital Holdings announced in November 2018 that its Boston affiliate, Mayflower Medicinals, partnered with Azuca on an infused edibles line that would be created in Mayflower’s commercial kitchen and sold in Massachusetts.

Azuca plans to expand its partnership with iAnthus to increase sales in the heavily populated Northeast region. Azuca also has heard interest from other manufacturers, including beverage makers, but it has yet to announce any deals, Rael said.

“Expect to see Azuca with regional coffee makers,” she hinted.

Earlier this year, Azuca made a big decision to build out its manufacturing operations in two subleased facilities in Colorado after deciding not to settle in New Jersey.

The company previously did a few pre-production sample runs in the Garden State but wasn’t a fan of the rules for manufacturers producing CBD-infused products in New Jersey—mainly because there weren’t any, Rael said.

New Jersey has a medical marijuana program and is one of several states that have sought to legalize recreational cannabis. But the state—where adult-use legislation stalled earlier this year—has lagged behind Colorado, California, Washington state and other places that have set up a robust regulatory framework for the cannabis industry. Not far from New Jersey, New York state has banned the manufacturing of CBD-infused products, and authorities have even seized products from some restaurants.

Moving its manufacturing to Colorado removes at least some of the uncertainty for Azuca, because the state already has an established regulatory framework for cannabis manufacturers.

Under Colorado law, for instance, manufacturers must be able to prove all parts of the hemp plant utilized in a food product were sourced from a state with a legal industrial hemp program—or a country that inspects or regulates hemp under a food-safety program or similar setup.

“Regulatory volatility is the biggest challenge in this industry,” Rael said.