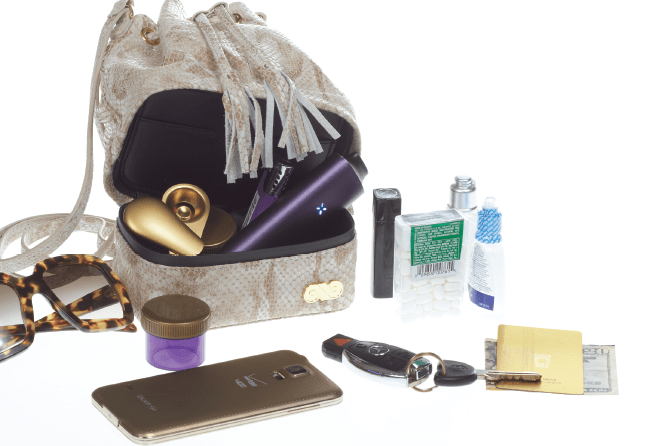 Jeanine Moss dreamed up and researched the idea of “affordable luxury” accessories for chic cannabis-smoking women, created a brand, designed products, manufactured them – in China, no less – and supported a sales and marketing operation.

Her company, AnnaBis, bills itself as the first haute couture entry for cannabis accessories, including upscale handbags and clutches. The company’s accessories range in price from $70 to $295.

A big part of getting AnnaBis off the ground was answering this question: What do women want? That required lots of conversations with women, personal observations at dispensaries and elsewhere, and loads of research.

That means no images of Bob Marley, the Jamaican flag, or a marijuana leaf emblazoned on AnnaBis products – which could be a turnoff for the kind of customer the company is targeting.

Moss also tapped a deep bench of experts in multiple fields for help.

“I know someone fabulous in every marketing sector, from ecommerce to digital marketing,” said Moss, a high-powered executive with a background in marketing, advertising and technology.

Here’s a closer look at how Moss, who cofounded AnnaBis with Ann Schuch, carved out a niche among women cannabis users and handled other challenges along the way.

She held her first one-on-one interviews and focus groups at a Women Grow meeting in New York City.

Moss also interviewed people at other industry meetings, at dispensaries, at friends’ houses – and even stopped some on the street. Additionally, she asked women to introduce her to other women.

When not speaking with women, Moss hung out and observed them at parties, head shops and dispensaries, noting what they had in their purses, the kind of purses they carried, and how they consumed their cannabis.

While this type of market research is valuable, Moss cautioned that asking prospective customers what they want isn’t enough.

“Challenge them. Try to find the outliers; don’t look for agreement,” Moss advised.

Her research confirmed that the company’s products needed pockets that can discretely store items such as pipes, vaporizers, lighters, eye drops, grinders and, of course, cannabis.

The purses – which have a resin coating – also must be airtight so no odors leak out.

Even the name, pronounced Anna-Bee, took a lot of research and brainstorming.

“We went through about 150 URLs” before coming up with the name, Moss said.

AnnaBis is a play on the typical marijuana company that incorporates “cannabis.” It also connotes the French-style and high-fashion image Moss and her partners were shooting for.

Another key to the company’s early success: identifying the best sales channels early on.

Moss said it’s important for ancillary companies to pinpoint how they’re going to sell their products, whether it’s through dispensaries, grows, e-commerce sites, or even mainstream brick-and-mortar stores.

After you pick the ones that you believe will deliver the greatest volume, “you can make all the other parts work,” Moss said.

Moss unveiled AnnaBis publicly at the Marijuana Business Daily Conference & Expo in Las Vegas in November 2015. The 100 pieces she brought with her were such hot sellers that she enlisted her 26-year-old daughter and one of her friends to help them move the inventory.

AnnaBis now primarily sells products via Amazon.com, at marijuana conferences and on the company’s website. Ultimately, Moss reckons her products could be sold in high-end boutiques and places like Nordstrom and Neiman Marcus.

Moss wanted to stamp “Made in the U.S.A” on AnnaBis products. She was willing to sacrifice margins in order to manufacture them in the United States. But after visiting half a dozen domestic factories, she learned something new: “When the jobs went to China, so did all the equipment.”

Manufacturing in China is challenging. First, you need to find a factory that can do the job, both in terms of quantity and quality. Moss hired a company that regularly manufactures in China to handle production. It turned out to be a great move, and she quickly was up to speed on the ins and outs of manufacturing. Using her newly gained knowledge, she and her team pinpointed a factory that met their needs.

“But make no mistake, it isn’t turn-key,” Moss said.

Her advice for other companies looking to China:

Moss has been involved in numerous startups during her career. Whatever the business, the key to success is tenacity, she said.

It’s inevitable that unforeseen obstacles will provide speed bumps along the way, and it’s important to be able to forge ahead even if you experience setbacks.

“It doesn’t matter if it’s money, the team, product issues, marketing, customer satisfaction – all of them will present challenges,” she said.

That happened at AnnaBis when the first designer the company hired didn’t work out.

“After months of drawings, exploring various features and fabrications, the prototypes arrived – and they were terrible,” Moss said.

Then it was back to the drawing board. Moss tapped her Rolodex and sources and found another designer who had worked at Coach, Isaac Mizrahi and Halston.

The new designer offered ideas built on the ones the company already had, and made them better.

During this time, Moss didn’t consider giving up. For starters, she immediately called a contact in Los Angeles with whom she’d worked previously on a fashion project. This person gave her the name of the “gem” of a designer who was hired – and that designer worked out well.

The lesson: “The key is to always keep moving forward and go in all directions at once because one of them will pan out,” Moss said.

It’s also important to realize you can’t give everyone the recognition, power and money they might demand.

“Sometimes you have to be the bad guy,” Moss said. “When you’re spearheading a company everyone isn’t going to be happy with your decisions and not everyone will like you. You have to be OK with that.”

You can try to mitigate conflicts by creating clear roles, responsibilities and authorities, she said.

“As women, we strive for consensus. But that’s not always possible,” Moss said.