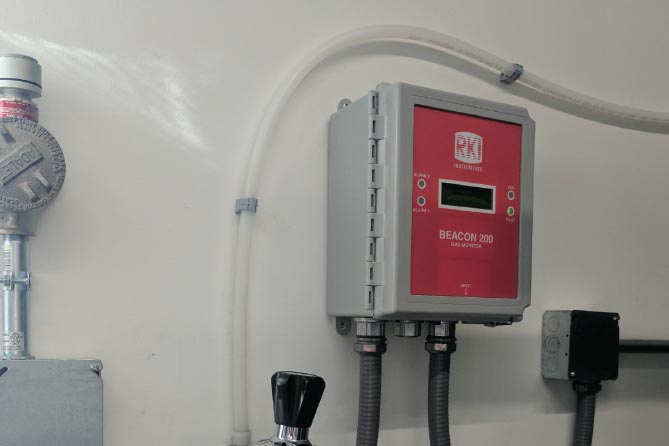 How to protect your extraction business from harmful blazes, explosions

Operating any type of cannabis business is difficult, given heavy state regulations on the industry, lingering stigmas and the
illegality of the plant at the federal level.

There were multiple extraction explosions in 2016. Although most involved illegal home laboratories, licensed companies were not immune from the risk of fires and explosions – like the blast last fall at an Oregon facility that landed a 34-year-old man in a burn unit for a month. And in 2015, an explosion tied to hash oil production at a licensed New Mexico MMJ company sent two workers to the hospital and resulted in $13,500 in fines for various safety and health violations.

To minimize the risks, companies can consult with fire and safety experts to improve their facilities during the design phase. They also can take a host of steps ranging from training their employees on fire and safety procedures to regularly inspecting equipment to ensure seals aren’t damaged.

Moreover, there’s a new tool at their disposal: The National Fire Protection Association (NFPA) – a nonprofit in Quincy, Massachusetts, that develops safety codes and standards – has been working on a marijuana-focused chapter for its Fire Code, which cities and states nationwide could eventually work into their own regulations. Chapter 38, as the new section is called, can serve as a safety blueprint for owners of extraction companies.

But flipping through the new chapter isn’t the only thing you should do to safeguard your employees and facilities.

Vireo Health didn’t have a blueprint like Chapter 38 back in 2015, when it started looking into designing and building its cultivation and extraction facility in Perth, New York.

Vireo did, however, have the foresight to consult with local fire and safety officials about what the company needed to do and what standards it had to meet to be safe and compliant with fire codes.

“It’s their job to understand all these rules, and they helped us to understand them,” said Eric Greenbaum, chief scientific officer at Vireo Health.

That was especially important since Vireo had purchased a building that needed to be fully gutted and then renovated, meaning that fire safety design and equipment had to be incorporated from scratch. Without the help and insights of fire and safety professionals, Vireo could have easily overlooked taking safety precautions and installing equipment that would be critical to any marijuana processing operations.

“The fire safety codes and the fire safety inspections were a part of that initial buildout,” Greenbaum said. “We know our building was built to code because the guys that enforce the code advised us how to do it.”

The inspectors were able to tell company officials what they needed, and how to set it up. Vireo also hired a professional fire alarm company that rigged the building with a comprehensive alert system that includes multiple smoke alarms in every room.

“They helped us put together a very sophisticated fire protection system,” Greenbaum said. “And we know it’s been done right because we talked with safety professionals about it, so having that peace of mind is important – both in terms of being compliant and in terms of knowing that you’re working in a safe environment.”

Extractors in California are also working without official state guidelines, but some have looked to what their peers are doing in states that do have fire regulations.

“We’re sort of mimicking what (they) are doing in Colorado,” said Seth Hilsabeck, CEO of Quality Concentrates, which performs butane and propane extraction in a 2,000-square-foot facility in Los Angeles.

For example, like his colleagues in Colorado, he uses so-called Class 1 Division 1 equipment such as exhaust fans and air conditioners.

To earn a Class 1 Division 1 designation, equipment must be built so the motors are isolated to reduce the chance of a spark, and plugs are also more protected.

Extractors also must factor in that butane and propane are heavier than air, which means the gasses tend to be low lying.

Quality Concentrates has dealt with that issue by installing its electrical outlets a few feet above floor level. That way, in the event of a spark, ignition will be less likely because the spark will be above any stray gas.

To extract THC from its plants, Vireo uses the supercritical CO2 extraction method, which is the process coffee companies use to strip caffeine from coffee beans.

While not combustible like butane, CO2 can still be a health and safety hazard for extractors: If it leaks and essentially replaces the oxygen in the room, asphyxiation can result. It’s a rare event that hasn’t happened in the cannabis industry yet, to the knowledge of the people interviewed for this story, but it has happened in other sectors such as restaurants.

“It’s used under high pressure so there is risk of breakage and release of CO2,” Greenbaum said, “and it can be toxic if it replaces the oxygen that is in a room.”

To deal with that threat, Vireo installed a CO2 monitor, which is hardwired into the building’s fire alarm system. If the amount of CO2 in the room hits unsafe levels, the monitor will trigger the alarm system.

Vireo’s extraction room is also outfitted with powerful fans that can pull CO2 out of it.

However, those fans must be turned on manually, which could be problematic if the person responsible for activating them were to be overcome by a dangerous gas. Greenbaum noted that Vireo is considering installing automation technology that would trigger the fans when CO2 levels become dangerous.

Quality Concentrates has two extraction machines – one an Emotek; the other, from Precision Extraction Solutions – that are located in a separate back room. One hundred-pound cylinders containing gas are in another room. Hilsabeck runs one fan continuously in the gas tank storage room, while two fans in the extraction room run when the machines are functioning. A fourth fan is situated where the company stores its spent cannabis. Because the leftover product may still have some residual gas, the fan ensures the remainder gets blown out.

“We of course have gas monitors, but those only work so far,” Hilsabeck said. “So you always have to make sure your ventilation is working correctly, because that is what’s going to save you in the event of an accident.”

Dano Keys – CEO of FlexMOD, a Denver-based company that designs and manufactures extraction rooms – also believes air flow is critical to safety. As such, Keys’ company locates extraction rooms along an exterior wall of the building so fans can blow excess gases out and bring fresh air in.

Keys also noted that the smaller the room, the less ventilation it takes to empty it.

FlexMOD also claims its fans and other electrical equipment come with “spark-proof technology,” which is widely used in the petroleum and natural gas industries. The equipment comes with state-of-the-art switches and outlets that are designed to not emit sparks. That’s important because sparks can ignite a room that has butane or another combustible gas in the air. The rooms also come with gas detectors that are automated and can trigger fans when unsafe levels are hit.

In addition, it’s important to routinely and frequently inspect and change equipment. For example, Hilsabeck or his workers constantly check equipment to ensure seals aren’t broken, and they change nuts and bolts so those parts won’t end up stripped and unmovable. “We clean our machines before and after each use,” Hilsabeck said. “That lowers the chance of something going wrong.”

While monitors, ventilation and spark-proof technology are critical aspects of any fire safety regime, there is no better protection than a well-trained employee who knows how to operate the equipment with safety in mind.

After Vireo hired a chief extraction technician, the company immediately sent her to its sister facility in Minnesota, which was already operational. Upon returning to New York, the technician spent another few weeks being trained by veterans of Vireo in Minnesota who were temporarily working there. When that step was completed the technician took the reins full time.

“The people who operate the extractor are expert operators,” Greenbaum said, explaining the need for the process.

A properly trained technician will know a machine should not be left unattended while in operation.

“Constant monitoring is key,” Greenbaum said. “We never leave (the machine) alone during extraction. Someone is always there watching the gauges to make sure safe pressures are maintained.”

It’s also important to establish standard operating procedures that mandate certain safe habits and behaviors, said FlexMOD’s Keys. For example, spark-proof equipment won’t do much good if an employee brings spark-emitting electronic equipment like a cellphone or radio into an extraction room. So a company would be wise to write into its SOPs a provision forbidding employees from bringing electronics into an extraction room where gas might be present.

“A lot of people in this industry have been working without regulations for years and think they don’t need them,” Keys said. “You need protocols to keep your employees safe.”