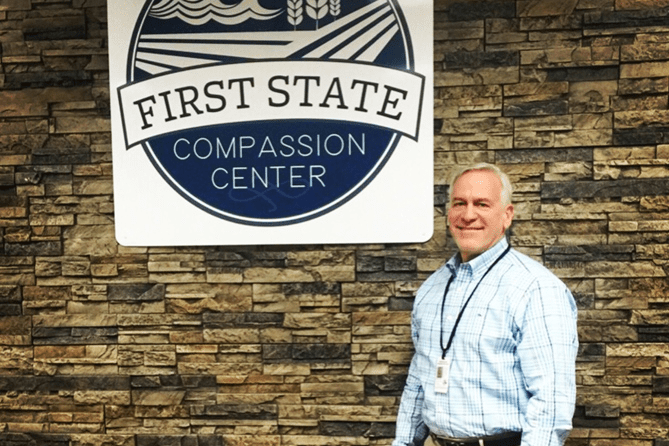 When “marijuana” and “state trooper” are used in the same sentence, it usually means someone is in trouble.

Not so if you’re referring to marijuana and Mark Lally, a decorated retired state trooper who runs the only medical cannabis dispensary currently operating in Delaware. Lally opened First State Compassion Center on June 26, 2015, after experiencing bureaucratic holdups and construction delays.

Since then, Lally has had Delaware’s small market to himself, given that the state initially allowed just one vertically integrated dispensary to open. (This will soon change, as Delaware is now poised to award two additional medical marijuana licenses later this year.)

Lally has found that running a vertically integrated dispensary provides some significant cost savings in the long run – particularly because his cultivation site is directly connected to his storefront, so he doesn’t incur transportation costs.

But running both a grow and a dispensary can also present some challenges, particularly when just starting up.

Here are some tips for entrepreneurs based on Lally’s experiences.

The most important step in the early days is to find a spot to set up shop, both in terms of location and type of building.

Lally figured it made the most sense to locate in the most populous area of Delaware. But because the dispensary would be serving patients from other parts of the state, he also wanted to be close to major highways.

Lally found the ideal location in New Castle County, where 65% of the current patient base lives.

He also planned to have the grow facility and dispensary under one roof rather than operate out of separate buildings. With that in mind, he found an old tile wholesale building that fit the bill. It had two large warehouse spaces in the back – a perfect place to grow marijuana and store inventory – and a retail area up front, complete with a counter.

“And because it was an old tile business, it was a really nice granite counter,” Lally said.

The location also had a fence around it, providing an important layer of security. Lally still had to install vaults and cameras, and he has 24-hour security at the facility. But finding a location that fit the company’s needs – rather than having to start from scratch or remodel the entire property – helped save time and money.

Because of the facility’s high electricity needs, being connected to the grid didn’t provide enough power.

So Lally invested in a transformer to help meet his electric needs. To help keep utility costs down, the facility uses both motion detectors and timed lighting, so lights are on only when absolutely necessary. First State also uses LEDs and florescent lighting inside of the building, both of which help save money and energy.

Still, Lally said he wishes he had been able to take more energy-efficient measures before opening, possibly by installing solar technology or some other type of alternative energy system. If you have the time and money, it can be beneficial to go that route right at the start, as it will help lower bills in the long run. Lally, however, felt that in his case it was better to open his doors quickly.

“Our main goal was to get open as soon as we could for our patients, and we did that at the expense of pursuing alternative energy measures,” he said. “But it’s certainly in our future plans to try to reduce (our energy needs) as much as we can.”

In the run-up to opening, First State held a two-day job fair for positions at both the dispensary and grow site. It also advertised the jobs on its website. Both methods resulted in “a lot” of applications, Lally said.

The company now has about 30 employees, with the vast majority on the cultivation side. First State’s retail staff is much smaller but includes a handful of budtenders who are also medical marijuana users. Lally didn’t initially think of seeking out patients for those positions. But after a few submitted resumes, he realized they could be huge assets given their knowledge of the plant and its medical uses.

“They have a very good understanding of how medical marijuana helps patients,” which in turn allows them to provide recommendations to customers, Lally said.

First State brought on a handful of workers from states with legalized medical or recreational marijuana – including its chief grower Joel Allcock, who previously grew under Rhode Island’s medical marijuana program.

But most of its employees are from Delaware and don’t have such experience. That’s just fine though: Many positions require the same type of skills any other business needs.

“We can train anybody here for any job. What we can’t train are caring and compassion and loyalty. So that’s what we look for first in our hiring process,” Lally said. “And if they have marijuana industry experience, well that’s certainly a plus.”

It’s important to have employees who are flexible and can work extra hours or take on the responsibilities of other workers when needed, especially in a startup environment.

“There are times when everybody has to do everyone else’s job just to get the place up and running,” Lally said.

So how do you find employees willing to work unusual hours or take on duties outside their job description? During the interview process, Lally made sure to emphasize that his company is a startup and needs people who can juggle multiple tasks and responsibilities. If they balked, he knew they wouldn’t be a good fit.

But it’s important to plan properly from a financial point of view: those extra hours during the opening and roll-out phase can also add up to unexpected employee costs.

“In the beginning it’s a little difficult because you are struggling to get to where you want to be, so you tend to have a lot of people working and a lot of overtime to get us to the point where we want to be,” Lally said. “But now we’re at the point where the hours are easier to regulate.”

Adjust Strain Mix Based on Feedback

When it came to picking which strains to grow and offer, Lally and Allcock examined Delaware’s qualifying conditions list. They then looked into which strains are the most popular – and effective – for each condition.

Allcock was a key hire, as he had been the chief grower at the Thomas C. Slater Compassion Center in Providence, Rhode Island, where he developed a wealth of strain knowledge. Based on his recommendations, First State moved forward with growing the strain Gasband, which is ideal for cancer patients going through chemotherapy. Many patients say the strain helps increase their appetite and subdue their nausea. Allcock also started growing Pineapple Fields, a hybrid that helps with pain during the day because it doesn’t induce drowsiness.

As more patients came in and provided feedback, First State broadened its mix of strains. Today, it grows 17 strains, including sativas like Sour Kush and Jet Fuel, indicas like Blackwater Kush and Alchemist, and hybrids like Hollywood Haze and Original Sour Diesel.

“Most of it is dictated by the market. What are people demanding? What are we selling? We’re constantly gauging that because it’s constantly changing,” Lally said. “We didn’t start with 17 strains like we have now, we started with much less.”

This is also why having knowledgeable budtenders is important. While First State serves patients who know what they want and are in and out in five minutes, others like to linger much longer, either because they have a lot of questions or just want to socialize with other patients and staff.

Looking back, Lally says that perhaps he was too eager to start serving patients.

It’s important to have a diverse selection of strains, concentrates and hash from the get-go – as well as to have enough product on the shelves.

First State actually almost ran out of inventory at first. Part of the problem was a state restriction that limited Lally’s cultivation center to no more than 150 plants (a rule that has since been lifted).

“We had to make a business decision that after the first day we would limit everybody to 14 grams per day,” Lally said. “If we hadn’t done that, we could have sold a larger amount to a fewer number of patients, but we wanted to make sure nobody left here without medicine.”

In the rush to launch, Lally said First State’s product also wasn’t quite at the level he wanted it to be at on opening day.

“Maybe we could have cured and dried it a little bit longer. Not that it wasn’t good product, it was just that we wanted everything to be top-notch,” Lally said. “We opened very quickly, maybe sooner than we should have. But we wanted to get product out to our patients as soon as possible, even if it wasn’t a very large amount but (just) enough for everyone to have some.”

Now that Lally has nearly a year of experience under his belt, he intends to apply for both of the remaining two licenses now up for grabs. While some consumers might worry about a monopoly, Lally believes he has a good chance to win the licenses because the patient population isn’t large enough to support another grow facility.