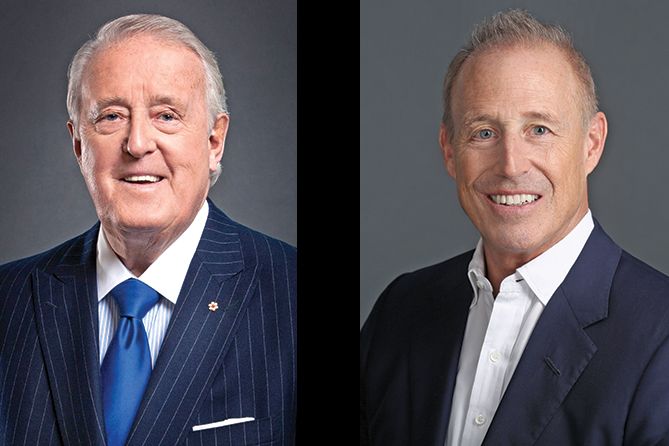 The high-flying cannabis industry is attracting former congressmen, presidents and prime ministers—not to mention bigwigs from IBM and other mainstream companies.

Among the latest to join the green rush: former Canadian Prime Minister Brian Mulroney, who accepted a seat on the board of Acreage Holdings, a multistate marijuana company based in New York.

Mulroney, who was prime minister from 1984 to 1993, will join a board already stacked with political and business heavyweights that include John Boehner, former speaker of the U.S. House of Representatives, and Douglas Maine, IBM’s former chief financial officer.

What is the significance of Canada’s legalization of adult-use marijuana in the context of the global cannabis industry?

Mulroney: Legalization would be a big deal anywhere. We’re only the second country in the world to propose national legalization. Given Canada’s role as a member of the G-7, a member of the Commonwealth and one of the leading economies of the world, this makes a difference. It sends a signal of social advance to the rest of the world.

My expectation is that—like everything else of significance—it takes a little while. But others will follow. So it’s a big day in Canada, but it’s also a big day for the rest of the world who are listening. The signal that Canada sends out today will not fall on unresponsive ears.

Do you think the United States will legalize medical cannabis someday?

Mulroney: I wouldn’t be surprised (if it was legalized) for medical purposes. The wealth of advantages that will flow from the medical use of cannabis could be extraordinary. The United States is the world leader in research and development. The leaders of the United States would certainly not want to preclude possible advances in medicine.

Murphy: When you think about the medicinal value of cannabis, and the fact that the (U.S. Food and Drug Administration) has given approval for a cannabis-derived drug produced in the U.K., I think that legalization of medicinal, at minimum, is probably closer than many think in the United States. There is no denying the medicinal value of cannabis. As a proof statement, the FDA has recognized that smartly. We’re hopeful in the very near term they will recognize it within the borders in the United States.

Some people say medical cannabis is one of the greatest business opportunities of our generation. What are your thoughts?

Mulroney: Absolutely. Obviously, we’re on the cusp of an extraordinary period of development, utilization and need in this area to the extent that medical cannabis can be used to relieve sorrow, anxiety and tragedy that afflicts so many in Canada and the United States.

This seems to be an opportunity for redemption by governments towards their citizens, on a par that is rarely equaled.

This is a unique opportunity for informed debate and discussion on this issue, because the rewards for Canadians, Americans and others can be so bountiful.

What does the interest of companies like Coca-Cola and Pepsi tell you about this sector?

Murphy: Whether you’re Coke, Pepsi, Anheuser-Busch or Molson Coors, everyone sees how they can benefit—and benefit their shareholders—with cannabis. It’s a very complex plant. There are a number of components within the plant that provide wellness products.

Coke sees it as more of a wellness opportunity, whereas alcohol and spirit companies see it more as a hedge against losing market share in their core businesses.

Constellation was the first to put their foot forward with a check for $4 billion. But make no mistake: You are seeing all the major players around the space angling as to where they can find their entry point into this opportunity set.

Mulroney: Investors are queuing up to take advantage of a unique opportunity. While I was surprised at the amount, I wasn’t surprised at the fact, because it seems to be entirely logical that this is the way major investors and major corporations are going to go.

Is Acreage’s goal to expand outside North America?

Murphy: To date, our business plan is solely focused on the United States. With the 50 states that we have in front of us, (33) of which have a medicinal program for cannabis, we have our work cut out for us in those states.

The United States is roughly 5% of the world’s population, but we as a country consume more than 80% of all opioids. That staggering statistic, along with another 115 people dying of opioid overdoses every day, has us focused on bringing an alternative—cannabis—to the marketplace.