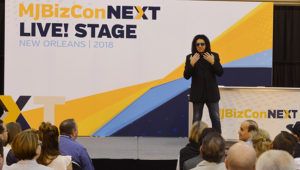 (This story has been updated to reflect that Gene Simmons has no ties to Highmore Group Advisors.)

From soda to beer to pinball machines, credit cards, magazines and more, Gene Simmons has spent decades lending his celebrity status to market a tireless trail of companies, products and brands.

This year, the music icon and co-founder of the hard rock band Kiss added a new venture to that list: cannabis.

In his role as chief evangelist officer at Invictus MD Strategies, Simmons has been tapped to be the frontman for the British Columbia-based cannabis grower as the firm hustles to gain market share ahead of the expected launch of Canada’s recreational marijuana market.

Simmons brings to the role nearly 45 years of brand-building and business startup experience. When he’s not slapping the bass at Kiss reunion tours, The Demon (his stage persona) is a founding partner in the global restaurant chain Rock & Brews and soon plans to launch a soft drink line, Money-bag, which will be sold across all 7-Eleven stores.

A self-proclaimed “straight-edged guy,” Simmons has long celebrated his anti-drug reputation. He’s notorious for urging rockers and the fans that celebrate them to just say no.

When it comes cannabis, however, the ’70s rock legend says he’s had a “change of heart.”

As he talks to the masses about his pivot, his message is simple – but calculated: “Do your research so you can make informed decisions. Don’t be misinformed, like I was.”

Marijuana Business Magazine spoke with Simmons about his new cannabis gig and what’s fueling – and funding – his new position in this booming industry.

What’s with the change of heart?

In the interest of full disclosure: I never held anything rolled up, cigarettes or otherwise. I’ve never injected anything. I’ve never been drunk in my life. I’m pretty boring. I became interested when the planets aligned and I met Dan Kriznic, the CEO of Invictus. He came to my house and started pitching me on the idea. In the past, I’ve been dismissive, pretty arrogant, misinformed and judgmental of the entire industry, because I didn’t know. The more research I did, the more shocked I was. I saw the video of the 6-year-old girl who has epilepsy, and they started rubbing a cannabis-based product on her, and miraculously she stops having seizures. It is mind-numbing.

Were you approached by other cannabis firms?

Canopy. Tweed. All of the largest cannabis companies on the same day – they all came to my house one after another to pitch me. It was like sharks – a feeding frenzy. I was the piece of meat in the ocean, and all the sharks wanted me. It changed my life. I’m fairly bright and well read, and with a lot of that came a holier-than-thou mindset at times. Pragmatically speaking, if you’re dismissive of something that you’re not informed of, you look like a jackass. It was a good lesson for me to be told: “You don’t know everything, Gene. You haven’t been everywhere, and you’re talking through your ass.”

So, why did you choose to align with Invictus?

It starts and ends with Kriznic: the way he treats the people he works with, their loyalty and allegiance to him. In a corporate environment, culture is important, and it starts from the top down. There are some who believe you should always bet on the horse, not the cart. That’s not always true. The guy that’s driving the horse to get to market, you’re betting on that guy. The horse is able. The fruit and vegetables in the cart, they are prime, A-level products. But if that guy makes a wrong turn, left or right, you’re in trouble. So, bet on the management.

Invictus also gave you a pretty cushy deal to sign on, right?

They gave me $2.5 million American, plus $10 million in stock. Cash is OK, but the stock in the company is a very good thing. The rest of it will just be hard work. I’ve had the change of heart about what the nature of cannabis is, but my initial interest is financial. I’m very interested in the financial model.

Were you concerned that aligning yourself with a cannabis company might hinder other opportunities for you?

I don’t think of it that way. I have to be who I am and let the cards fall where they may. If someone doesn’t like what I’m doing, well, I make a living. You know that song “I Gotta Be Me?” That’s me. Look, laws are changing around the world, and that’s not accidental. I don’t want to seem like I’m promoting cannabis. I’m not. I just want more research to be done. Most importantly, the masses should get informed, so they can make informed decisions in their lives.