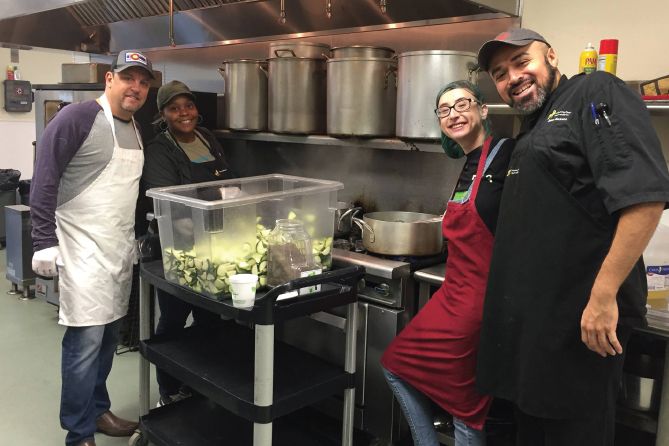 Cannabis companies around the nation are finding they can get back nearly as much as they give to their local communities.

Being recognized as a good corporate citizen can make it easier for marijuana businesses to work with regulators and local officials, stand out from competitors and attract new customers and high-quality employees, according to industry executives and experts on corporate giving.

They said cannabis companies can give back to their communities in a variety of ways, ranging from providing volunteer time for events and projects to collecting food donations. And with U.S. cannabis retail sales estimated to reach $8 billion-$10 billion this year, many companies have room in their budgets to cut checks to cause-driven organizations.

“Giving back has always been a part of my life, but part of my mission is also breaking stereotypes about people who use cannabis as not being contributing members to society,” said Annette Atkinson, owner of HWY420, a Washington state marijuana retailer that has been recognized for its charitable giving.

“If I can increase the population that believes marijuana is an OK alternative to alcohol and opioids through showing that people who use marijuana are not horrible people, then on the business side, I think that will help me.”

Giving Back a Requirement

Being a good corporate citizen could be a government requirement for marijuana entrepreneurs.

In 2016, Denver started requiring applicants for retail marijuana licenses – and those seeking to renew their permits – to submit “community engagement” plans. The idea: “Create positive impacts in the neighborhoods where the licensed premises are located.” Some options for companies include neighborhood beautification, increasing access to healthy food, homelessness assistance and improving connectivity and transportation.

Denver-based KindColorado helps cannabis companies in the state strategize how to connect with neighborhood groups and nonprofits. The consulting firm works with dispensary operators such as Lightshade and Buddy Boy Brands as well as cultivators like Veritas Fine Cannabis.

Among other activities, KindColorado has organized opportunities for marijuana company employees to pull weeds alongside refugee farmers, serve food for women struggling with poverty and fund senior-focused food banks.

“Cannabis companies are really becoming a part of their communities, and they feel really lucky about that,” said Kelly Perez, co-founder and CEO of KindColorado. “It isn’t about hitting licensing requirements. It’s about getting to serve a community where you don’t have to be in the shadows anymore: Coming out, standing tall and using your privilege and opportunity to be an asset.”

How Companies Do It

Community engagement will look different for each company.

Bloom Farms in California has been described as a leader in corporate social responsibility. The company tracks sales of its cannabis oils, vape pens and other products and donates the equivalent amount of meals to a food bank on a one-to-one basis.

The Giving Tree has taken a different approach: Employees who work at the company’s production facility and two dispensaries in Arizona participated in the Take Steps for Crohn’s and Colitis walk and the American Cancer Society’s Making Strides Against Breast Cancer 5K. Altogether, the team raised more than $21,000 for Phoenix charities in 2017.

Also in the Pacific Northwest, the owners of TJ’s Cannabis in Washington and TJ’s Gardens in Oregon started The Forrest Initiative, a center dedicated to helping under-resourced families obtain CBD for children experiencing seizures, neuropathic pain and other medical issues.

The team at KindColorado recommends cannabis executives see for themselves if their community outreach plan is really getting the support and brand differentiation desired.

If the efforts are not hitting those benchmarks, companies may need to work with fewer nonprofits, look for new needs in their communities or make other tweaks.

“From the community perspective, what we are looking for isn’t just outputs but outcomes,” Mathis added. “An output is pounds of food donated, dollars raised, coats collected or meals served. But the outcome we’re hoping to have is: There is reduced food insecurity in their neighborhoods, and there is increased health.”

In 2016, Dope Magazine named HWY420 the Most Charitable Cannabis Store in Washington state. Each month, the company donates $1,000-$1,200 to rotating charities and causes, forgoes tips for its “karma jars” and donates $222 to the Olympia chapter of 22 Too Many, a grassroots group trying to end suicides by veterans.

In addition to growing the potential customer base, Atkinson, HWY420’s CEO, and others believe a strong corporate social responsibility assists in attracting and retaining talented employees, fostering customer loyalty and distinguishing brands from competitors.

One way Atkinson hoped to stand out was by closing both her stores on one of the biggest days for cannabis sales of the year: April 20, the marijuana holiday colloquially referred to as “4/20.”

“We’re actually making it a day of giving and encouraging our producers, processors, customers and our staff to participate,” Atkinson said. In all, she said, about 45 people participated in the handful of volunteer events HWY420 hosted in April.

Atkinson got the idea for the giveback after a customer told her about a low-income friend with a home in need of repairs. HWY420 decided to work on the house. The company also partnered with Habitat for Humanity on a project, picked up trash in a park and cleaned the cars of Meals on Wheels drivers.

Atkinson said she hoped volunteering on April 20 and holding a party a couple of days later would allow her dispensaries to face less competition on the popular shopping day, drawing customers and vendors to her event for the month.

“It went pretty well,” she said. “One thing we learned is I spread us a little too thin. I think do it again next year … we’ll do one big (volunteer) event.”

Cannabis companies wanting to give back should start by looking in their own backyards – rather than to a national charitable group, said Kevin Mahmalji, outreach director for the National Organization for the Reform of Marijuana Laws.

“You’re a dime a dozen at the national level when you’re engaged with these larger organizations. It may get you a good press hit, but it’s not anything that will serve your organization long term,” Mahmalji said of contributions.

Investing at the state or local levels could help companies connect with their neighbors and address their concerns, show regulators they are making a positive difference and forge long-term partnerships, he said.

“If a business is looking to engage in a community-outreach project, they need to be looking long term – certainly beyond 90 days; maybe six months would be more appropriate – to really start to see the fruits of their labor,” Mahmalji said.

In 2017, Kaya Cannabis launched a program that allows customers to pick what organizations should receive donations. The Denver dispensary operator prints a second copy of customers’ receipts and labels three to four baskets that are on display with the names of nonprofits to which Kaya Cannabis is donating money.

The baskets rotate about every two months and might include health-related, civic-engagement and animal-welfare options, said Amanda Gonzalez, CEO of Kaya Cannabis.

“You pick which one of those felt most meaningful to you, drop a copy of your receipt in there, and at the end of each month we total up all those receipts and give each nonprofit a percentage of the sales,” Gonzalez said.

Kaya Cannabis donated roughly $15,000 to local groups from the time of the program’s creation in May 2017 through the end of December, Gonzalez said. To get the program started, the company:

“From those resources – mostly just putting it out to the community – we ended up with about 46 nonprofits that said they were interested. Some of those weren’t good fits for us,” Gonzalez said.

“For example, as much as we care about younger folks in the community, we would never publicly donate to anything that has to do with children under the age of 21, because we never want to be perceived as marketing to that population.”