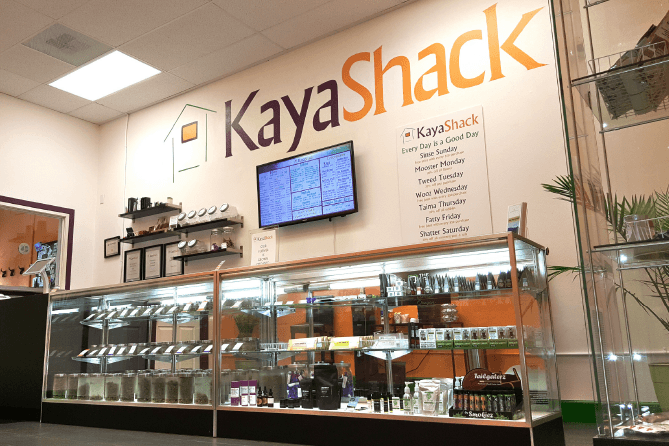 For Kaya Shack, consistency is essential to building a loyal customer base and fueling growth

If there’s one guiding principle behind Kaya Shack, which operates two dispensaries in Oregon, it’s the importance of creating consistency.

When CEO Craig Frank talks about customer experience, vertical integration or the company’s growth plans, it all comes back to maintaining quality and meeting expectations.

“That’s the core of your service commitment to the customer,” Frank said. “If customers can’t expect to have the same high-quality experience…then why should they give their loyalty to you?”

Kaya opened its first dispensary in Portland, Oregon, in July 2014 and another in Salem just over a year later. Consistency became especially critical with the second location, as the company wanted to ensure customers received the same experience at both dispensaries.

In line with that thinking, Kaya Shack – which is controlled by the publicly traded firm Kaya Holdings – isn’t trying to reinvent the wheel. Frank said the company adheres to proven, established business practices and methods it has used successfully in the past.

Which goes back to the consistency principle. When the industry was still in its infancy, dispensaries would often sell out of a particular product and then just replace it with something else. Patients were left wondering what would actually be on the shelves when they visited.

“Customers couldn’t anticipate what stores would have,” Frank said.

Frank added that the ability to operate within certain price points, obtain healthy margins and create a consistent experience for consumers are all connected to what you put on the shelf.

When Kaya Shack opened its first dispensary in Portland, the local press dubbed it the “Starbucks of medical marijuana.”

Frank is quick to point out that the media coined that term, not him. But he does see some similarities in Starbucks’ model and what Kaya Shack strives to provide, including consistency of experience, product and quality.

“You go into a Starbucks in New Jersey or Portland and you know what to expect,” he said. “And your expectations are going to be met.”

Kaya Shack expanded to include a grow operation in the first quarter of 2015, making its parent company the first U.S. publicly traded firm to own a majority interest in a vertically integrated legal marijuana enterprise.

That move helped the company address some issues with consistency and quality. Compared with buying cannabis wholesale, Kaya Shack now has much more control over the cannabis it sells – from the time it’s planted until it ends up in a customer’s hands.

“We know what we’re producing, therefore we know we can be consistent in the selection and the quality,” Frank said.

Moving to a vertical integration model has also helped the company reduce key inventory costs by 60% because Kaya Shack is now growing its own flower. Frank thinks the company can bring the cost down another 20% by improving growing practices and becoming more efficient.

The important factor to consider in any big decision like this is what type of value it brings to the customer.

“We try to offer them something with a value far greater than what they’re paying,” Frank said.

For its second dispensary, Kaya Shack opened a 2,100-square-foot space in Salem, Oregon, dubbing it a marijuana superstore.. Frank said the store has become one of the leading dispensaries in Salem.

One of the guiding theories for opening multiple businesses, Frank said, is to go for the same look and feel and understand that you might have to duplicate certain costs.

“The idea is you walk into one and you have the same offering as you do in the other across town,” Frank said.

He cautioned against branding that is too specific to one location, which can create consistency issues down the road.

“If you think you may open a second location, plan your first location accordingly,” he said. “Try to create an identity that is able to transfer with you from place to place.”

Frank said that while the company does intend to continue expanding, for now Kaya Shack is taking it slow.

“We initially thought the opportunities to expand were greater than they are,” he said.

Part of the problem revolves around volatility.

When it comes to pulling the trigger on an expansion, it’s important to ensure the regulatory climate is somewhat stable, he said. That’s not the case right now in Oregon, which is still working through issues tied to its recreational marijuana industry.

Frank also said it’s difficult to find the right location. Landlords are often reluctant to rent to cannabis businesses, and those who do “feel like they can hold a ransom.”

Given that agreements with landlords often are 5-10 years, “we’re not prepared to be completely beaten up” to secure a location, Frank said.

“We’re doing what we can to grow as fast as we can and be responsible,” he added.

Frank said Oregon’s cannabis market has become highly saturated in some areas, so Kaya Shack has looked at other states to expand. But many states the company has eyed – including California, Massachusetts and Nevada – have difficult regulatory environments.

“Until we see a regulatory system that we think is stable then we try to hold off,” he said. “There’s going to be a lot of pressure to change the rules so why would we get in now?”

Operating as a Publicly Traded Company

Prior to the cannabis industry, Frank served for four years as CEO of Alternative Fuels Americas, a publicly traded firm that focused on fracking. The company decided to transition into the cannabis space and started looking for opportunities in mid-2013, eventually changing its name to Kaya Holdings.

The company then opened the dispensaries itself under the name Kaya Shack.

One of the biggest challenges was establishing the public company infrastructure for a marijuana enterprise, Frank said.

Frank said the firm, which trades on the over-the-counter markets, has had to be extra cautious given all the scrutiny on cannabis.

“We’re operating in an industry where we don’t necessarily want to call attention to ourselves,” he said.

Kaya Holdings executives remained diligent about compliance and didn’t want to give anyone any reason to dislike them.

“We assumed we were going to be under the microscope,” Frank said. “We had to come up with a way so that everyone was comfortable. We needed to be extremely honest and extremely dignified in the way we conducted ourselves while still touching our plants.”

He emphasized the necessity of avoiding undue hype and spin. Frank also stressed the need for transparency across the entire industry, and specifically for publicly traded cannabis companies.

“We need to be fair to the people who are investing in us,” he said.