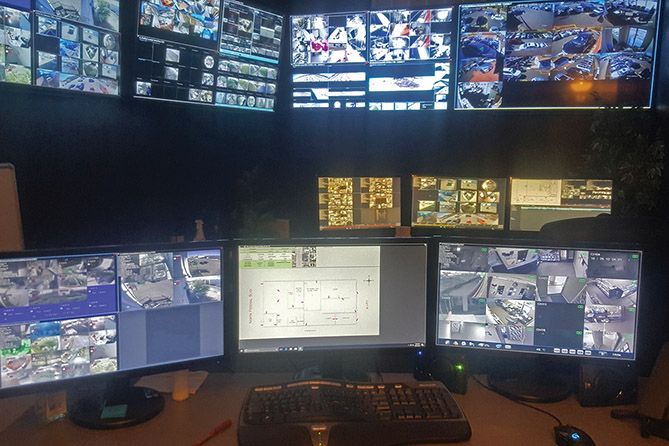 In the past few years, thefts at cannabis grow facilities have made headlines as thieves got brasher. In 2017, for example, Seattle cannabis businesses (both growers and retailers) were victims of 65 burglaries—some striking boutique indoor growers at the most vulnerable time: just as their crop was ready for sale.

The Seattle cannabis crime wave revealed a weak point in the regulatory process. After growers compared notes and an investigative journalist documented the thefts, Washington state removed grow houses from its public map of cannabis businesses. But in just about every state, cannabis-crop tracking isn’t going anywhere, and anyone can find growers’ locations as a matter of public record.

Such news underscores why it’s up to growers to protect themselves, according to experts.

With wholesale recreational marijuana prices ranging from $1,000 to $2,400 per pound in legal markets, cannabis remains big business. In addition, the illicit market still thrives in many states, making cannabis crops a tempting target for criminals.

It’s hard to calculate an industrywide total for growers’ losses to theft. That’s because, experts agree, many crimes are never reported—let alone solved. The key for growers looking to protect their crops: Control access, and don’t make it easy for the bad guys. Even controlling the odor from your grow can help make your facility a less-conspicuous target for crooks.

“Our philosophy on security is layering it,” said grower Drew Stuart, who uses fences, walls, gates and technology to safeguard High Desert Relief, the medical marijuana company he co-owns in Albuquerque, New Mexico. “We can’t necessarily stop anybody from wanting in. We can just slow them down, and that’s why we do it.”

The first and most obvious security consideration is the physical plant, including walls, entries, vaults and fencing. State regulations mandate different approaches to structural security: Oregon demands commercial-grade locks on exterior access points and a steel-framed vault for all product, while Washington requires an alarm system on entry points and having all fencing in view of cameras.

Experts agreed the regulations are just a starting point. While going above and beyond regulation-required security might cost more, Stuart said, “It’s peace of mind, and we would invest appropriately to do it. None of our costs (for security) have been out of control.”

Stuart’s 32,000-square-foot grow sits behind barbed-wire fencing and 12-foot cinder-block walls. “To anybody who drives by, it looks like a vacant building. (We want to) operate with no one realizing what’s going on,” he said. “Just keeping the nuisance odor down—we seal our rooms, use carbon filters and all that—to not broadcast what we’re doing here.”

Employees at High Desert Relief enter through a tall, overhead gate and park behind another sliding gate in a lot that isn’t visible from the street.

Powered gates that offer keycard access, long-range RFID or license-plate recognition cost $6,000 to $10,000, but the cost is worth it, said Mihai Simon, president of ETG Systems, a Denver systems integrator with a heavy emphasis on security and surveillance. Otherwise, “people will cut corners and leave the gate open. Proper measures cost money to do right. … Put in something that will last without having to manage it all the time—or worse, have it shut off because it’s too inconvenient to use.”

“When you’re looking at reinforcements on your facility, you’ve got to focus on the choke points,” Simon advised. “You don’t have to have the whole thing built out of reinforced concrete to have the building be secure and have your employees feel safe.”

Perimeter doors should be professional-grade steel with commercial access-control locks. The combination could cost from $1,500 to $3,500. Simon and Grant Whitus, president of Denver-based Helix Security, agree that grow facilities should have only one entrance with a temporary holding area. In this mantrap, operators can screen visitors before admitting them to restricted access areas.

Growers can incorporate cinder block or concrete-reinforced walls with multiple layers of drywall for interior ceilings, Simon added. During the drying process, store product and flower in rooms with steel mesh-reinforced walls secured with commercial-grade locks.

“The whole point of a secure storage room or vault is to make sure that whoever gets into your facility will not have easy access to your stash,” Simon said. “Whether a vault is raided usually is based on how long it takes somebody to break into the vault.”

In Albuquerque, Stuart’s dry room/dry product storage is an actual vault inherited from the site’s previous tenant, a jewelry manufacturer. “It’s all reinforced concrete, endowed with rebar every 12 inches, with big combination steel doors. That probably would have cost us $150,000 to put in.”

Outside, if there’s any risk of ram-raiding—using a vehicle to smash into a building—consider installing bollards, protective concrete or steel posts that deflect vehicles. Even Jersey barriers, the concrete blocks that sometimes direct highway traffic, can be a useful deterrent. (Jersey barriers cost about $300 per 4 feet.)

Though securing the structure is only the beginning, growers don’t need to go overboard, Whitus said. “We’ve seen companies spend tens of thousands of dollars in building secure walls and securing windows. But we feel that if you have guards during the day and a good monitoring system at night, you’re spending far less money and still getting law enforcement there. Money is better spent on a good system than on trying to fortify a location.”

Security for a grow facility can range from simple keypads to state-of-the-art cameras with advanced analytics that detect changes in humidity to biometric data such as face scans or fingerprints. But most growers can leave those features to the movies and focus on essentials that make the most of their investment.

“Most grows do use keycard or key-fob access control for tracking employees’ movement throughout a facility,” said Kevin Brown, sales manager for Helix Security. “You want to be able to limit access to individual rooms. For example, only manager-level employees should have access to the vault room and security room. The access-control system also produces an audit log. Should you have an incident, you’ll be able to see who accessed which rooms when.”

Some state regulations, including California’s, require audit logs to be stored in a secure environment. Experts recommend investing in reliable, redundant storage for security records such as audit logs and months to years of security-camera footage.

Cameras and video recording are a vital security tool—and a core cost. Ali Kafaii is co-founder and chief operations officer of Source Cannabis in Los Angeles, which operates two grows in the city. “We have interactive cameras, which people monitor 24/7. We do anything anybody could imagine for securing the safety of the building—including cameras that cover certain hallways (and) areas that would be dead spots, like angles and turns or corners. We make sure we can cover everything, including the roof.”

In addition to exterior and interior visual cameras, Stuart’s Albuquerque facility includes drop cameras in specific locations, including the vault, with sound monitoring. If the vault camera hears a burglar working with tools, it sets off an alarm.

“If anyone charges less than $300 per camera installed, I’d be cautious—unless it’s a super-simple install,” Simon warned. “You’re looking at cabling costs, camera setup, miscellaneous materials, licensing costs for software and storage, which may not be included in that cost.”

Simon estimates on-site storage at anywhere from $3,000 to $30,000, depending on how much video a grower is required to keep. States such as California and Pennsylvania, for instance, require growers to store up to four years of video.

Instead of “a stack of 11 DVRs,” Simon advised growers to invest in a professional, computer server-based solution.

Brown agreed. “There’s a real benefit to backing up video to the cloud. For one, you’re eliminating the large capital expense of NVRs (network video records) and local storage hardware. You’re also protected from hard-drive failure if video is stored redundantly in the cloud. And it protects your data from being stolen (during a break-in).”

While buying hardware involves one initial capital expense, cloud video involves a recurring monthly or yearly fee. The cost varies depending on the resolution of stored video and the number of days stored.

An alarm system is standard these days and often required by regulations. Every potential entrance point should be alarmed, from fences to windows and doors.

Stuart’s team gets motion-sensor alarm notifications once or twice a week, though the culprit isn’t always a burglar. “Cats set them off; people looking in the trash (at the retail store).” High Desert Relief’s alarm notifies seven people, so there’s always someone to glance at their phone and handle the situation, no matter the hour. “In this industry, you have to sleep lightly,” Stuart said.

Panic buttons are another key security element. Unlike an alarm that might alert an owner or sound a siren, panic buttons instantly notify the police department. These links to the police cost $50 to $500 to set up, depending how much wiring is involved.

“We typically recommend having fixed panic buttons installed so you know where they’re located,” said Brown, who recommended one in almost every room. “In addition, you can have mobile panic buttons,” which employees wear around their wrist or on a lanyard.