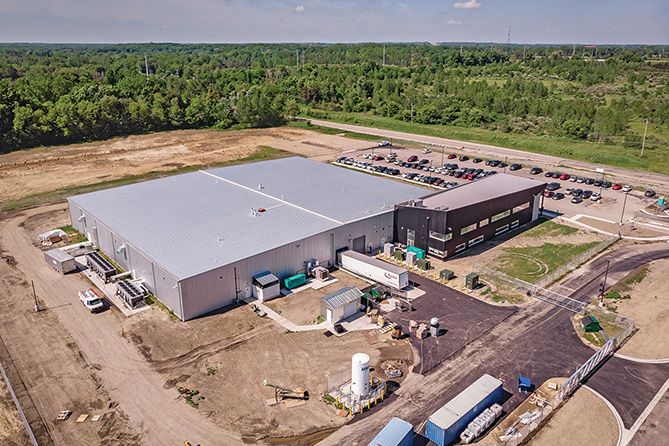 Last December, the Windsor Township, Michigan-based cannabis cultivation and processing company secured 12 grow licenses in the state. Green Peak also is developing an industrial park where the company is headquartered and is welcoming other cannabis businesses to set up shop.

“We have a substantial runway ahead of us,” CEO Jeff Radway said.

As part of its strategic game plan, Green Peak is creating a marijuana hub. In 2017, it began developing an industrial park in Dimondale, Michigan, near Lansing, called Harvest Park. The site houses the company’s main facility.

“We took an area of land and put in infrastructure, roads and utilities, sold off nine other lots to other cannabis business and kept one for ourselves,” Radway explained.

Green Peak worked closely with the municipality and bought the land—67 acres—from Windsor Township. “After going further,
we realized we didn’t need all that land and thought we had a ready, willing and very supportive municipality and decided to create a real estate development that was good for the community, good for us and could serve cannabis companies looking to move to Michigan,” Radway noted.

Green Peak created a development company, Alimac, which sold off the remaining nine parcels of land contained in Harvest Park. Innovative Industrial Properties (IIP), a marijuana-focused real estate investment trust based in San Diego, bought the property in a deal valued at $13 million.

IIP made available an added $18 million in funding for further expansion of Green Peak’s cannabis cultivation and processing facilities at Harvest Park. Assuming full payment of the additional funding, IIP’s total investment in the property will be $31 million.

Phase 2 of Harvest Park is set to begin this fall. Green Peak is developing 50 acres of cultivation, processing and infused product manufacturing operations. That will likely happen in the next 24 months.

This property will include a 111,000-square-foot industrial building, which Green Peak will use for its cannabis cultivation and processing operations. The first half of the building was completed earlier this year; the second half will augment those operations.

Having a group of disparate marijuana-focused businesses together in Harvest Park is a plus, according to Radway. “It allows for collaboration (between us all) and supply chain efficiency. If there were a testing lab in the park, they’d probably get the business of everyone.”

There were thoughts about collaboration with other cannabis companies on power, testing and utilities, but “it’s going to take a good two years until we’re at that point,” Radway said. Two of the nine lots are under construction; the other seven are empty.

Green Peak, meanwhile, is expanding beyond cultivation and processing. In March, the company closed a $30 million funding and plans to open 30 Skymint retail outlets in Michigan—14 this year, the remainder in 2020. The stores currently offer medical products such as flower, vape pens, oils and edibles. The retail outlets also will offer recreational products once that market launches, likely in 2020.

Also on the drawing board: plans for 40 Skymint stores in Florida. “So, in the next two years, we plan to have 70 stores—and 100 in three years—all in Florida and Michigan,” Radway said.

In a related move into retail,
Green Peak has created a new wholesale flower brand, North Cannabis Co. Roughly 50 Michigan dispensaries already have committed to carrying the new brand, according to the company.

And Green Peak is further expanding its product line by moving into infused beverages. The company inked a licensing partnership with Shorts Brewing Co., a Michigan craft brewer. The infused beverages will be nonalcoholic and are expected to be available before the end of the year.

In addition to expanding into retail, Green Peak is enlarging its geographic footprint. In June, the company agreed to acquire a licensed, vertically integrated Florida business, Tree King Tree Farm, for $48 million. The deal gives the company one of 22 vertical licenses in Florida, which is among the nation’s largest medical cannabis markets.

“This allows us to expand our footprint and gives us a really solid position,” Radway said. “It’s a fantastic state for medical, and it will become a great one for recreational. Having the No. 2 and No. 3 states in the country fits our model. It effectively provides us with the runway for growth in 2021 and 2022, and Michigan is growth for us in 2019 and 2020. We have a very strong runway for the next four years.”

Green Peak planned its Florida growth for years. It engaged a law firm and a lobbying firm there and began to develop relationships in the state and talked with current license holders to see who would be willing to sell.

“We kept our ear close to the ground and built relationships with a law firm, lobbying firm and with licensees and business owners in the state so we’d have good connections and a good network,” Radway said.

“We used a lobbying firm,” he added, “because cannabis is a heavily regulated industry and the ability to navigate highly complex structures is a must. Those regulatory environments are different by state. So using a top-tier lobbying firm to help us build political, regulatory and legislative relationships is a smart move, and it’s worked well for us.”