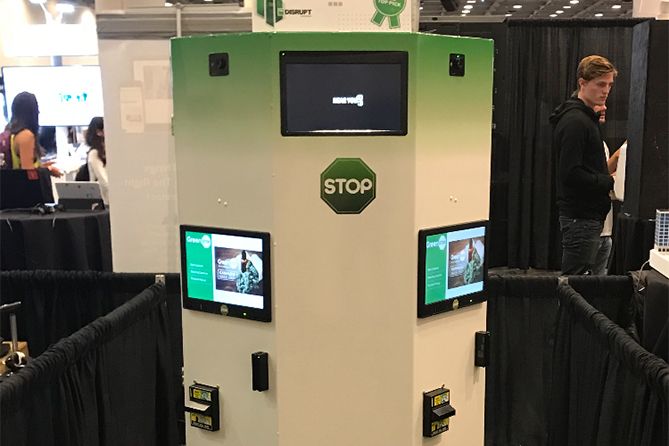 The recreational marijuana industry is just getting its foothold in California, but GreenStop already wants to shake up the market through automation.

GreenStop believes automated vending machines designed to serve multiple customers simultaneously could slash wait times at dispensaries and bring more money to retailers. The West Los Angeles company unveiled its Smart Dispensary in April and is in the process of raising money ahead of rolling out the kiosk, mobile app and commercial software to dispensaries throughout California — and possibly other states and Canada by 2020.

“By using the Smart Dispensary, we’re able to let dispensaries who are breaking even see hundreds of thousands of dollars — if not millions of dollars — added to their bottom line annually,” predicted Timothy Island, co-founder and co-CEO of GreenStop.

The newfound profit would come from increased sales and lower labor costs for marijuana retailers who use GreenStop, he said.

Island and co-founder and co-CEO James Edwards claim the Smart Dispensary would allow customers to place cannabis orders through an app from home or elsewhere, verify their IDs in the store and then quickly purchase products at the kiosks. The result: more customers (and cash) in less time for dispensaries. The system also might curtail the need for staffing budtenders and free up existing employees to work with clients who want personalized service.

GreenStop is hoping investors will chip in $5 million toward the company. The startup’s goal is to begin testing the Smart Dispensary before the second quarter of 2019 and to have the software and technology ready to roll out to interested retailers by 2020.

Shifting to a Tech Company

GreenStop sits near the sidelines of the cannabis industry. The ancillary company does not own or operate its own medical or retail marijuana stores and is not in the business of growing or manufacturing cannabis.

And that’s a marked change. When GreenStop started in 2015, the original plan was to open a dispensary and use kiosks inside to dispense cannabis products. But Island and Edwards shifted the model after researching the market. Their findings convinced them to ditch their plans to become a plant-touching business.

“We realized it is hands-off companies that were able to attract the money at this point in the game with the federal cloud over the industry,” Island said, referencing the additional challenges plant-touching companies face. “We also realized there’s a lot more risk being an owner-operator at this point.”

In particular, the pair wanted to sidestep the danger of a possible federal crackdown on the marijuana industry while still creating a highly scalable business in an emerging market.

Making the Vision a Reality

One hurdle the tech startup faced early on was that neither Island nor Edwards knew much about technology. Instead, they had backgrounds working in stores ranging from small shops to big-box retailers that included Sears and AutoZone.

The entrepreneurs had a concept in mind for an automated vending machine similar to Redbox movie and video game dispensers or airport kiosks that print boarding passes. But they lacked the technical skills to produce such a machine.

“Our thinking was, ‘Hey, we’ve got the vision,’” Island said. “‘We both have management and leadership backgrounds. We both have business acumen. All we need is to recruit a couple technical people to help us build some of our vision out.’”

Using online job listings, GreenStop attracted an electrical engineer, a software engineer and a mechanical engineer. The company sought out professionals who were excited about the industry and the company’s business model but did not specifically look for those with previous experience in the cannabis industry. One engineer was a recent college graduate who hadn’t worked on a major product before.

The team built a prototype in-house and then took the early technology to manufacturers to build the final version.

GreenStop did not disclose which manufacturer(s) it worked with or the cost of the kiosks. The founders said they’ve spent more than $500,000 on the business so far and can get a demo version of their kiosk produced in three to six weeks. Long term, they hope to be able to produce about a kiosk a week.

Island and Edwards are naturally enthusiastic about the Smart Dispensary, going as far as to call the system “the future of the cannabis industry.”

“We got as creative as possible with our kiosk, which is pretty revolutionary just for the fact that multiple people can use it at once,” Edwards said.

Technology industry publisher TechCrunch included GreenStop as a top pick for the retail space at its Disrupt SF 2018 event in September. The Smart Dispensary’s potential lies in its ability to clear up some early issues with buying and selling cannabis, Island said at the conference.

GreenStop hopes to let users make in-store purchases in less than five minutes by allowing customers to explore products ahead of time using an app, make their selections and then come to the store to purchase the items at a Smart Dispensary kiosk. Those new to cannabis or people who want to talk about products on the market could still go through the normal channel of buying from budtenders.

“There’s a big chunk of the market that, if they had more of a self-service experience and purchasing was put back in the control of consumers, they would have a much better time,” Island said. “It’s not that they don’t want consultants, but some people need a consultant an arm’s length away, where they can ask for you if they need you, but it’s not completely forced upon them every time they enter your operation.”

Island and Edwards wanted to make sure cannabis retailers were interested in buying their technology before the pair shelled out thousands of dollars and focused on GreenStop full time.

“In 2015, we personally went to the dispensaries to make sure this was valid and viable technology,” Island said.

During the company’s early days, GreenStop secured five letters of intent from retailers who were interested in purchasing the kiosks. The company garnered more attention from the industry this year, after it released a video online demonstrating the product.

“Since we launched the commercial in April, we’ve had more than 50 companies say they want the tech right now,” Island said.

The TechCrunch event in September was the first time the public – including investors – could interact with the Smart Dispensary. GreenStop’s playbook is to continue offering demonstrations of the product at other live events, attracting attention and, possibly, investor dollars along the way.

GreenStop plans to license its software as well as lease its octagon-shaped kiosks to dispensaries, Edwards said.

Late this year or in early 2019, GreenStop wants to test about 10 kiosks in dispensaries in the Los Angeles area, where the company is located. The company wants to try the technology in micro, small, medium and large retailers, or those that see revenue ranging from about $1 million to more than $20 million – retail categories outlined in a report from the California Bureau of Cannabis Control.

“It’s not going to be like, ‘Hey, you buy this and put it in the corner.’ This is going to be a focal point of your business,” Edwards said, adding he expects adopters of the technology to be dispensaries with large demand and a desire to stay competitive. “It’s a whole new, revolutionary way to do retail.”

Timothy Island and James Edwards developed their high-tech vending machine after getting fed up with the hassles of buying marijuana at California dispensaries.

“One of the biggest things wrong with the industry is how long it takes to purchase cannabis,” said Timothy Island, who co-founded West Los Angeles-based GreenStop with James Edwards.

The pair wanted technology to accelerate the purchasing process so that customers could be in and out of a dispensary in less than five minutes.

GreenStop’s technology is designed to allow shoppers to explore cannabis products via an app ahead of time. They can make their selections, then head to the indoor dispensary kiosk to purchase their merchandise.

Island and Edwards believe their retail backgrounds – working in stores ranging from small shops to big-box retailers such as Sears and AutoZone – are a huge advantage that shaped the design of their self-service kiosk and its accompanying software, known as Smart Dispensary.

“We’ll talk to people that opened up dispensaries because they had the money but they have no background in retail at all. They just want to take a shot at the industry,” Island said.

The result can be a subpar shopping experience where customers wait up to half an hour to buy product. That process can involve customers waiting in lines from the time they arrive at a dispensary until they pay for their purchases.

“If you look around, a lot of cannabis locations have really long lines. Or, if the line is short, it still takes a long time to get in and out of a location,” Island said.

“The other problem,” he added, is a “hyper-consultative” atmosphere, where shoppers are forced to interact with budtenders regardless of their familiarity with the product. Island likened it to buying a laptop from Apple or “something that takes a lot more of a consultative experience.”