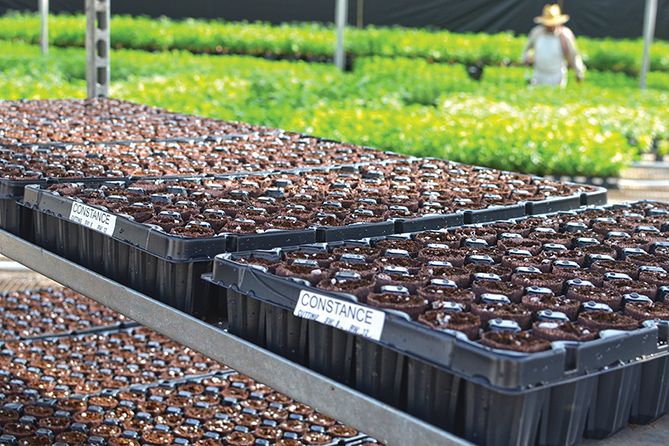 Growing hemp is a lot like growing tomatoes and poinsettias—but it’s not entirely the same. As a dioecious plant that doesn’t self-pollinate, there is a certain learning curve to mastering hemp production that makes it unique. That’s what the team at Greenhouse Growing System (GGS) in Lochbuie, Colorado, learned when the operation started growing clones for hemp production in 2015.

The 110,000-square-foot greenhouse operation is leveraging its mainstream experience with more than 50 years of agricultural greenhouse production to produce organic hemp clones and indoor flower for CBD extraction, and to partner with new farmers to provide technical farming support. GGS is investing in new technology and infrastructure to ensure sustainable and efficient production, and its research and development team is building out a new source for high-CBD varieties and reliable, feminized seed.

GGS was founded in 2015 as one of three independent businesses led by CEO Alex Seleznov. Within a year, the firm became part of the now vertically integrated company Advanced Extraction. Since then, GGS has seen exponential growth of hemp production in Colorado and beyond.

When the U.S. Congress passed the 2018 Farm Bill, it led to unprecedented new opportunities in hemp, prompting more farms to seek hemp licenses. This, in turn, has spurred demand for verifiable, sustainably grown, high-quality hemp clones and seeds.

Jason Stephenson, Greenhouse Growing System’s facility and production manager, said the operation is counting on this growth as it builds on decades of experience in ornamental horticulture to scale up production of organic hemp clones that it can ship to cultivators nationwide.

GGS enjoys a seasoned staff from Tagawa Greenhouse Enterprises. Many of the senior production team, including the head grower, worked for the Tagawa family for decades, then moved over to GGS to help establish the hemp grow.

Because Tagawa is a leader in young plant production for the ornamental bedding plant industry, the functions of growing mother stock, taking cuttings and growing liners were already production aspects that had been perfected and could be easily transferred over to GGS.

“A lot of the processes and SOPs are the same, regardless of the crops,” Stephenson said. “Now what we’re trying to do is take that scalable model Tagawa has worked 51 years on building and applying that to the hemp model.”

Other aspects weren’t as easy. The main challenge, according to Stephenson, was that hemp is not an asexual plant like most ornamentals and other agricultural crops. With male and female varieties that can vary widely depending on the cultivar, the staff had to identify the best means for uniform production and how to identify female and male plants.

That aside, the team learned that once established, hemp is an independent plant that grows quickly and easily, Stephenson said.

“Sometimes you do more damage by trying to micromanage it too much, and you end up causing more problems than you would’ve if you’d left it alone,” he said.

GGS has 22 full-time grow employees and 45 workers during peak harvest season. The hemp production and harvest season is countercyclical to the spring bedding plant season, Stephenson said, so GGS has a good working agreement with Tagawa Greenhouse Enterprises. When the greenhouse business is in its offseason, after the busy spring, employees may not work a full 40 hours per week. That works out well during the hemp harvest season: Tagawa employees can take a four-week leave of absence to help GGS
with its hemp harvest, then return to Tagawa when activities ramp up there again.

“We’re fortunate with having a good relationship with the Tagawas,” Stephenson said. “It’s nice because we’re able to maintain a steady demand for the labor force in the area, so they don’t have to look elsewhere.”

With the demand for hemp clones booming in Colorado and throughout the United States, GGS has seen its business increase exponentially, causing it to outgrow the 11,000 square feet of propagation space it filled a year ago. The operation recently opened a 13,000-square-foot propagation greenhouse range to more than double its clone-production capabilities.

The new facilities include all concrete floors that are easily sanitized and reduce the risk of introducing pathogens—compared to dirt or gravel floors—as well as new glass roofs and rolling benches with bottom heat and pressurized fog systems. Additionally, the entire greenhouse operation completed an electrical upgrade this spring, taking it from a 600-amp service to a 1,600-amp service, Stephenson said.

“That will allow us to have proper lighting, airflow and environment for the mother stock plants (and) clones and to help us increase the yields when we grow indoor flower,” he said.

In the propagation area, GGS uses sensors to measure relative humidity and maintain an 80% vapor pressure deficit to promote root growth and woody growth for upright, healthy plants. Temperature is kept at 75 degrees, and light is restricted to prevent plant stress.

Once the clones have established roots, they are moved from the propagation greenhouses to the main greenhouses. The new rolling benches allow three times as many plants to be moved at a time, increasing efficiency and enhancing lean flow. While the temperature is maintained at 75 degrees, humidity is reduced to prevent powdery mildew. Plants are lit with supplemental high-intensity discharge (HID) lights and fertilized heavier to allow them to bulk and green up.

GGS is placing an emphasis on growing hemp clones organically so it can be a compliant source for current and future customers seeking organic certification.

At the end of January, the operation received its new Ellepot system, an integrated propagation method that creates biodegradable plugs, and the operation is now growing all its clones in Ellepot plugs versus the Oasis foam it was using.

The Ellepot machine wraps GGS’ organic growing media blend in organic, biodegradable paper, sealed with hot glue in a sausage-like roll, then cuts it and punches the plug into a 72-cell tray and automatically dibbles a hole for the cutting or seed to be placed.

Because only two pesticide products are available for hemp—azadirachtin and pyrethrins—GGS maintains organic production by using an arsenal of beneficial insects and biological control agents (BCAs) to control pests. Stephenson said he advises customers growing indoors to do the same, but there are outdoor cultivators who employ beneficials and BCAs as well.

“We introduce predatory wasps for aphid control and predatory mites for spider mites, thrips and fungus gnat control,” Stephenson said. “We apply nematodes to the soil for fungus gnat and shore fly larva. We introduce ladybugs on a weekly basis, and they’re generic overall control, because they’ll eat anything, but they eat aphids primarily.”

Once hemp plants are harvested and the flowers are separated from the stems, GGS either donates green stems to local goat farms for feed or puts them on the compost pile to create mulch that’s reintroduced in the hemp fields to enrich the soil. Growing media from mother plants is also worked into the field to reduce waste and maximize resources.

Recognizing the need for a safe, consistent, reliable and affordable supply of feminized seed, GGS is working on its own seed-feminization project so it can be a go-to source for other growers, both for clones from mother stock and less expensive seed options.

The seed program is a new venture for GGS, built from agricultural division manager Calvin Bailey’s agronomic experience in organic vegetables. Bailey, who heads up research and development at GGS, said feminizing seed is a much more complex process than most realize.

“The seed-feminization process is well documented in other dioecious crops like barley, but for cannabis it’s yet to be developed,” Bailey said. “It’s all hearsay and basement hack science because we haven’t had the opportunity to do it on a production scale. It’s exciting to start to tease out best practices and collect the data and actually figure out what the real process is for legitimate, stable, feminized seed production.”

GGS is hoping for a soft rollout of the program in 2020, with up to 10 million seeds. The operation will conduct trials and use the seeds on its own farm in 2020; by 2021, it aims to have 110 million seeds available to the market.

With the current price of clones at $3.99 for large orders up to $7.99 per plant for smaller orders, feminized seed will be a more economical choice at about 70 cents per seed for large-scale farmers going forward, Stephenson said. Considering a standard 5-foot spacing on a 100-acre plot, a farmer would need to plant 17,000 clones.

“As farmers start farming larger acreages, it’s not going to be cost-effective for them to buy and plant clones,” Stephenson said. “There is a need for more selections with reputable feminine seed—and I want to stress the word reputable because there are a lot of fly-by-nighters that claim to have feminine seed and then the poor farmers get burned when they end up with 50% male seed.”

As part of the seed-feminization project, GGS is breeding its own hemp varieties to provide a wider selection of genetics for growers in the many different climates and microclimates that require variation in flower response and time to harvest, Stephenson said.

“The varieties are still in development. But everything we would offer, we are breeding for a minimum of  30-to-1 CBD (-to-THC) ratio,” he said.

Meanwhile, Stephenson said cultivators with smaller grows will likely opt for clones instead of seeds.

“As the bigger farmers get into this and our clone-production efficiency improves and demand increases, prices will go down, and then we’ll have to fulfill demand for indoor growers or smaller acreages that don’t have the labor resources,” he said. “The demand will be there, but it will become more of a niche market.”

“Depending on your location and the equipment you have, clones are going to give you a balanced plant for a minimum of 6 inches tall with a 1- by 2-inch soil volume,” he said. “With seed, you’ve got to sow it earlier, and generally you don’t get the same yield per plant as you do with clones. But it doesn’t mean you can’t get there.”

Laura Drotleff writes about hemp for Hemp Industry Daily and Marijuana Business Magazine. You can reach her at laurad@hempindustrydaily.com.