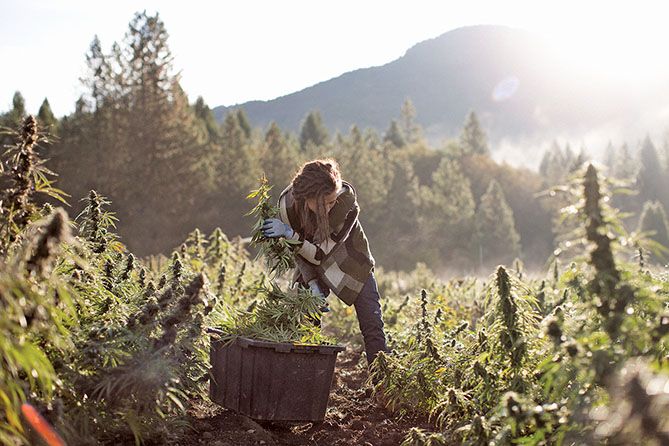 East Fork Cultivars is a respected cannabis cultivator in the Pacific Northwest, and in the months ahead, the family behind the company wants to win over the rest of the country.

Wesley died in 2017, but his influence lives on at East Fork. The farm-based business continues to cultivate craft hemp using green growing methods and has expanded to include CBD-dominant cannabis. Marijuana Business Daily recognized the company as an industry leader in December during the inaugural MJBizDaily Awards presented at MJBizCon in Las Vegas.

Looking ahead, how will East Fork achieve its goal of establishing a solid national footprint? In short, the company plans to get its plants—or their byproducts—into the hands of national brands. And, in the fall, East Fork will open a retail space in Portland, Oregon, where customers can consume CBD-infused products and preview its commercial seed line.

“We did just over $2 million in top-line revenue last year, so we’re still quite small in scale. However, the complexity of what we do and our outlook moving forward is certainly more ambitious than our current scale,” said Mason Walker, CEO and co-owner of East Fork Cultivars.

Walker anticipated East Fork bringing in $3.6 million in top-line revenue in 2020. The company also expected to enter its first private-placement memorandum this year for a $2 million debt offering that will help grow the staff from 24 year-round employees to a team of 30 or 35.

During the past five years, East Fork has entered more than a dozen partnerships with manufacturers that used products from the farm, including oil derived from the company’s cannabis flower as well as a special concentrate targeting beverage companies.

“We have about 10 different ingredient SKUs that we create with contract manufacturing partners,” Walker said. “We take our hemp and cannabis (marijuana) flower, and we sell it to some extraction companies in that form, but mostly we hire contract manufacturers, extractors, formulators to make custom-ingredient products to our standards.”

A primary ingredient for the company is a “water-suspendable concentrate” that is marketed to beverage makers. East Fork is working with a handful of beverage makers to help them develop drinks that contain CBD.

The company is an approved vendor for California kombucha maker GT’s Living Foods, Walker said. In the past, East Fork has partnered with Oregon beverage companies such as Rogue Ales on a CBD-infused seltzer and Stumptown Coffee Roasters for a cold brew line.

“A lot of the brands we have worked with are cannabis-native companies like us. And, increasingly, we’re working with product makers that have been in the more mainstream space that are adding a line that includes hemp as an ingredient,” he said. “Probably our biggest partnership this year that’s the most public and probably goes the deepest is with Gaia Herbs.”

North Carolina-based supplement maker Gaia Herbs has products sold in CVS pharmacies, Whole Foods Market and other major retailers. The company is working with East Fork on its line of full-spectrum hemp products.

East Fork is a farm-based business in a remote area near the Oregon-California state line, so most of its customers don’t get an opportunity to interact directly with the company. However, that’s expected to change later this year, once the company opens its physical space in Portland.

East Fork plans to take over the ground floor of a mixed-use building in Portland’s up-and-coming Foster-Powell neighborhood. The space, expected to open in October, will serve as an office for 10 employees and a warehouse for its hemp wholesale and e-commerce divisions. There will also be a small “flagship” retail outpost that East Fork is calling Hemp Bar.

East Fork’s goal is to “bring a small slice of the farm” to Portland. The tentative plan is for a community-oriented, beverage-focused cafe offering CBD-infused teas and alcohol-free cocktails, Walker said.

“It will be almost like an apothecary. There will be a bar with a budtender/bartender behind it, and they’ll create a delicious, CBD-infused matcha tea and they can also sell you a tincture in the little retail space there,” he said.

In November, East Fork announced a partnership with Vibrant Hemp Cultures that would allow farmers across the country to grow its cannabis strains through licensing agreements.

The startup, based in Hood River, Oregon, will propagate starter plants for East Fork through a deal with North American Plants, an Oregon-based tissue-production facility, and market and deliver them to hemp farmers nationwide, Walker said.

The licensing agreement with Vibrant will allow East Fork to start building relationships with farmers as the company develops commercial seed lines through its internal breeding program.

“If everything goes really well, we’ll do about $250,000 in revenue ourselves through the licensing deal. I’ve budgeted for about $50,000 in revenue,” he said. “It’s pretty small as a potential revenue opportunity; however, it’s really exciting because it announces us as a breeder to hemp farmers and previews where our seed lines should be in a couple of years.”