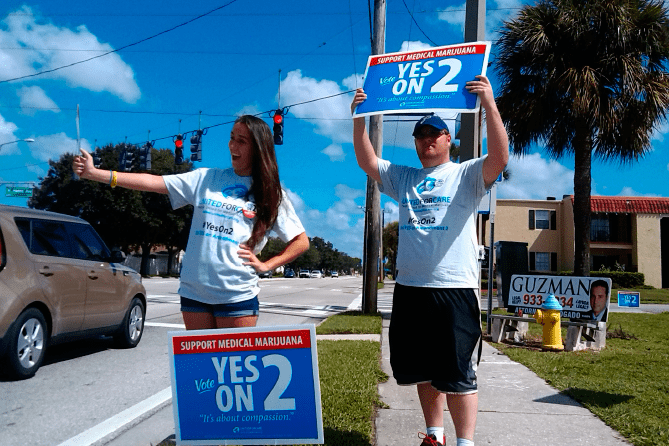 Searching for the next big medical marijuana market?

Look south to the sunny climes of Florida, where a measure to legalize MMJ will appear on the ballot this November.

While a similar proposal failed by a smidgen in 2014, the chances this time around are much better. Support for medical cannabis is strong across the state, and voter turnout will likely be much higher than two years ago given that this is a presidential election year, which typically benefits marijuana-related measures.

Regulatory specifics still need to be hammered out, and lawmakers could look to limit the size of the industry, possibly through licensing caps. Regardless, hopes are extremely high for the market’s potential, and entrepreneurs are already laying the groundwork to capitalize on opportunities.

“If it’s implemented properly, this will be the largest legal marijuana market in the world outside of California,” said Ben Pollara, campaign manager of United for Care, the organization behind the amendment.

There are several reasons entrepreneurs should be excited.

For one, the amendment is very broad and permissive when it comes to who would qualify for medical cannabis. The qualifying conditions include many of the standard ailments found in other programs, such as cancer, glaucoma, HIV/AIDs and epilepsy. The list also includes post-traumatic stress disorder, which brings a lot of patients into the fold.

Perhaps most importantly, though, the proposal includes a clause that would give physicians the leeway to recommend MMJ to patients with “debilitating conditions,” including any for which a doctor believes MMJ could help. That means patients with persistent pain, migraines and other, more minor ailments might be able to get medical cannabis cards.

Florida’s population is roughly 20 million people, more than Alaska, Colorado, Oregon and Washington State combined. If even half of 1% of the state’s residents sign up for MMJ cards – a reasonable assumption based on the initial qualifying conditions – that would amount to 100,000 patients.

The ballot measure also doesn’t include a residency requirement for businesses, which means there could be (and already has been) an influx of out-of-staters looking to get involved in Florida.

Despite the excitement, there are still plenty of unknowns.

Should the measure pass at the ballot box, the legislature will have to push through a bill to implement the new amendment. In doing so, lawmakers could slip in a number of new restrictions, including a possible cap on the number of growers and/or dispensaries that would be licensed by the state.

“There’s been a pretty strong effort mounted by the nurseries that got the (CBD) licenses… to get the legislature to look hard at the idea that they should be the only ones to have a license to work in Florida,” said Mike Smullen, co-founder of Altmed – which is developing alternative consumption products for medical cannabis patients – and a longtime MMJ supporter.

The CBD law, approved in 2014 ahead of that year’s election, was widely viewed as an attempt by policymakers to undercut the broader MMJ measure that ultimately failed at the ballot box. The law initially limited the number of “dispensing organizations” to just five for the entire state.

Competition for those five licenses was fierce, and in many ways it hasn’t ended. A sixth license was granted after a legal challenge to the permitting process held up in court, and there are more legal challenges pending, which means more licenses could possibly be issued.

The MMJ ballot measure this year doesn’t specify whether or not there will be a cap on licenses. The only thing the amendment mandates on that end is a six-month window for the Florida Department of Health to write regulations for the relatively new industry.

“There was talk of 15 licenses, 20 licenses. I don’t expect it to be unlimited or a very large number of licenses,” Sharkey said.

If that’s how it plays out, the number of cannabis-touching business opportunities would be minimal, though any company that wins a license could capture huge profits.

The amendment also doesn’t mention anything about local bans on cannabis businesses. So a number of municipalities and counties could opt to prohibit MMJ companies, as has happened in other states.

Organizers behind the MMJ measure hope to have a say in the final rules and regulations. United for Care has a “sister organization,” as Pollara put it, that’s dedicated to lobbying state lawmakers.

“We’re going to play in the realm of reality, and if reality dictates that there’s going to be some kind of (license) cap, then we’re not going to push for no cap,” Pollara said. “But certainly, our intent is to push for a pretty broad free market.”

The uncertainties at this point are daunting, however.

While some entrepreneurs are already trying to get involved, others are taking a wait-and-see approach before putting too much time and effort into developing business plans and securing real estate.

“There’s a lot of people in the state of Florida that are well-financed, intelligent, and are very capable of being successful in this business,” said Rustin Kluge, a native Floridian who owns a cultivation operation and infused products line in Oregon. “And there’s a ton of people sitting on the sidelines, waiting.”

Kluge is one of those interested onlookers on standby. Aside from his cannabis companies in Oregon, Kluge also has an investment firm that backs cannabis-related businesses, which is what he’ll be looking to do in Florida.

His advice for those who want to get into the industry is to hold off on developing a business plan at this point and instead work to help get the measure passed.

“There’s so many unknowns that we’re not anywhere near (figuring out a business plan),” Kluge said. “Land use rules, how, where, how much, how big can you grow, who can you sell to, all that stuff. There’s millions of implementation unknowns.”

Pollara said it’s important to remember that the war for a cannabis industry in Florida isn’t finished after the election. Rather, it would mark the start.

“Winning the election is a must, obviously, but just as big of a fight is getting this thing implemented in a way that balances patients’ needs and those of the industry,” Pollara said. “There’s a ton more work to do.”