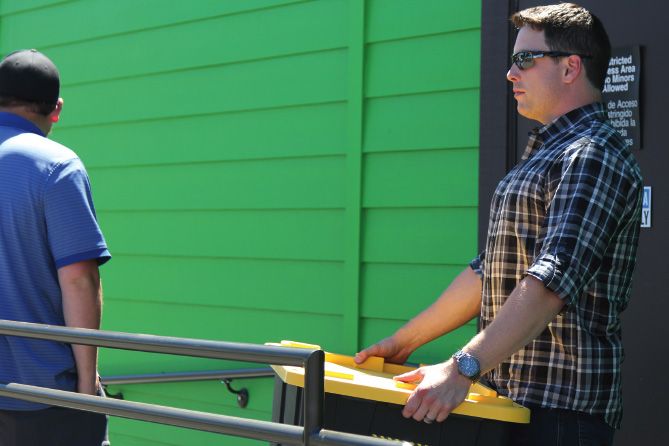 When looking to hire a guard for a marijuana company, it’s important to consider the environment in which the individual will be working.

Cannabis companies have a clientele that might not take too kindly to intimidating authority figures. So you want to strike a balance between presenting a deterrent to any would-be criminals, but you don’t want to scare away your customers, either.

“What we like is people who look like they can handle themselves in a situation that they need to be an authoritative figure,” said Michael Julian, CEO and president of MPS International, a full-service security firm headquartered in Southern California. “But you can’t have some ninja-killer Navy Seal standing at the door intimidating people as they walk in.”

Here are factors three security company executives consider when hiring for the position, searching for a suitable candidate and training and managing that individual.

A security guard must convey a presence that might make someone think twice about robbing a store, maintain a cool and calm demeanor and view customer service as a top priority.

Julian first looks for a candidate who served in the armed forces.

His perfect hire would be someone with military experience and, beyond that, law enforcement training.

But someone with that level of experience usually costs more than the $13-$16 an hour he can pay.

“The margins in this business are very, very low,” he said. “What we would love to get are former Special Forces guys that went to Afghanistan and kicked ass and took names. But we can’t pay those guys what they’re worth. What we look for and what we get are typically two different things.”

“They have the experience to use their head and do it right,” he added.

For Hunter Garth, founder and managing director of Iron Protection Group, based in Denver, a veteran is also the first choice.

Garth served in the Marine Corps, and he built his business to help veterans transition back into society after serving abroad.

The traditional security model is to have a person who is a visible deterrent, Garth said. He won’t stray from that model if that’s what a customer wants, but his preference is to find a guard who will complement a dispensary’s sales model.

“The largest and most important metric is how you carry yourself and how you communicate,” Garth said. “You don’t have to look like a bouncer. People who look like cops don’t help customers purchase cannabis. We don’t ever want to look overbearing. I never want people to carry themselves like they’re a badass.”

“We’re dealing with a Schedule 1 drug. We have firearms. And we’re moving product that’s worth a lot of money,” he said. “Protecting marijuana is strangely fitting for a lot of these guys.”

He believes the skillset his guards gained in the military makes them well-suited to the job, specifically their attention to detail, ability to follow a process and strong response to a more disciplined structure.

But he’s had to dial back the intimidation factor with his guards’ appearance. They started out wearing exterior vests and a gun on the hip, a very tactical-looking uniform.

“The industry didn’t like that,” Holtman said. “It made them nervous. The initial thought when they walked in would be, ‘Oh, man, we’re being raided by the DEA.’”

The company had to take a step back and “just chill out. A lot less Department of Defense and a lot more cannabis industry standards.”

Now, the company’s guards wear their vests underneath hooded sweatshirts and conceal their guns.

While trolling job boards and posting employment ads online can help you find a guard, the tried-and-true method of word-of-mouth referrals works as well as anything.

“When we have good officers, we ask them, ‘Do you know any like-minded, like-skilled people that you would recommend?’ That’s the best way to get quality people,” he said.

Otherwise he advertises on Craigslist, ZipRecruiter and Indeed. When writing an employment ad, you want to be specific about the job duties, necessary qualifications and the company’s expectations, Julian said.

“It weeds out the people who are just looking for any job they can get,” he added. “If they have any doubts about their qualifications, then they’re not going to apply. And that’s good, because that’s a mis-hire and that saves us time.”

He recruits using Indeed and Monster, but most of all, Iron Protection Group uses the principle “that one good veteran knows another good veteran.”

His company’s name has been out there for a while and he doesn’t have trouble sourcing guards, he said.

He said he gets better resumes if he recruits on these job-specific sites rather than a site like Craigslist.

Making sure your employees know what’s expected of them from Day One is one of the easiest ways to position your security guards for success.

Julian of MPS International not only trains his guards what to do on the job, he teaches what not to do.

“If you don’t tell them, they will likely do the wrong thing at some point because no one told them not to,” he said.

When it comes to management, he added, “people that will work in a lower-wage-paying industry are typically not self-starters or two-step thinkers, so close management is necessary to keep them on point and on task.”

“Treat everyone with respect, draw the parallels between my past and theirs so that we identify with each other, teach the importance of the nuances, remain firm but always fair,” he said.

He employs the age-old theory, “the devil is in the details.”

“I want my guards to understand that the details matter. How they present themselves at work, to tactical positioning at work and everything in between, ultimately it leads to a better product. The better the product, the more opportunities we have to hire veterans, the closer we are to our overall mission,” he added.

Holtman of TCDco views training as a vital part to providing a quality security service.

“Anybody can strap a holster on their hip and claim to protect something. But to have an individual with the ability to confidently navigate the endless liability and human risk in the security industry is another idea,” he said. “I do not believe there is such a thing as ‘too much training.’ There should be training in threat detection and defusal, physical training and upkeep, weapons handling, medical/trauma training, vehicle operations, understanding applicable laws, scenario-based training, inspectable item checks (licenses, certs, gear, etc.) and much more. “

His philosophy for management is placing an importance on trust, empowerment and surefootedness.

“A firm needs to be able to trust the people they hire to make good decisions,” Holtman added. “When the decision to hire and trust has been made, then be sure to trust. If the unfortunate day comes that the trust is broken, the firm needs to separate itself.”

He believes it’s the duty of the manager to strike a balance between encouragement and trust.

“When overdone, you may wind up with an overconfident, ego-driven individual who cannot make wise choices,” Holtman said. “When underdone, you may have the complacent security guard who rolls into work and punches the clock, disengaged. However, when done correctly, you are left with an employee that stands strong, determined and professional.”