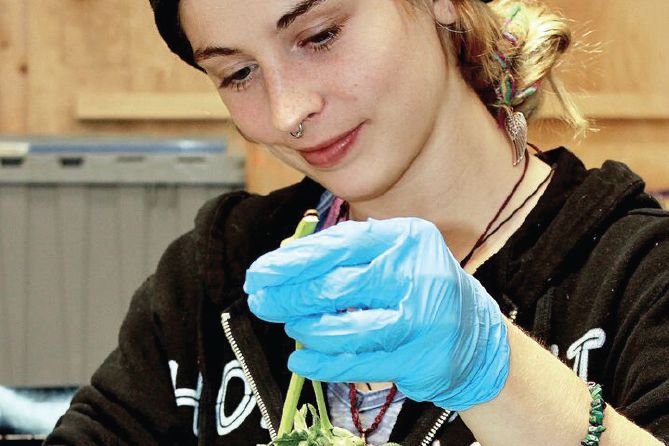 Marijuana cultivators keen to hire bud trimmers should look for candidates with a passion for the cannabis industry, a tolerance for tedium and a good attitude.

Trimming can be monotonous and repetitive. Trimmers typically spend their days harvesting buds from plants by hand, playing a key role in the quality of a product a cultivator produces. But trimmers can be a transient lot, with high turnover rates. Keeping trim crews staffed is an ongoing challenge for many cannabis operations.

Despite the monotony, being a trimmer is a way to get a foot in the door of the rapidly growing marijuana industry. In fact, many trimmers have gone on to much higher, better-paying positions, such as extraction technicians or growers. A business owner should remind prospective trimmers of that fact when staffing a crew to handle an upcoming harvest.

“Trimmers are definitely not the easiest bunch to work with,” said Aaron Spindler, production director at L’Eagle, a vertically integrated marijuana retailer in Denver. “It’s important for the trimmers to understand that they’re a crucial part in the process and have them take pride in the product.”

Below are tips from three industry professionals who wrangle and manage teams of trimmers throughout the year.

Leif Abel – co-owner of Greatland Ganja, a grower in Kasilof, Alaska – seeks out candidates who have a strong interest in cannabis.

“The prerequisite for any employee at Greatland Ganja is that you’re passionate about what we do,” he said.

He’d prefer to hire trimmers with experience, but such candidates can be tough to come by in Alaska.

In Alaska, people who work directly with the plant must first have a marijuana handler permit.

“That’s the first step to them showing that they want to work in this industry,” Abel said.

Alaska’s cultivation typically is done indoors so the harvest isn’t seasonal. That means Abel wants part-time workers who will commit to work for him when the plants need to be harvested.

Interestingly, he’s had good luck with grandmothers, stay-at-home moms and others who can’t work 40 hours a week but enjoy the part-time schedule.

He’s also willing to take a chance on a good candidate even if the person has a criminal record.

“We don’t like to discriminate against people who have had a hard time in the past and have turned their life around,” Abel added.

For Spindler, punctuality, a good attitude and an ability to follow directions are a must.

“We’ll know right away if they can’t even keep a schedule,” he said.

L’Eagle’s harvest schedule allows for trimming work to be done in batches. So the company has to work with part-time crews, and it will arrange for work to be done 30-60 days in advance of the harvest.

“Most of the time these people weed themselves out by not showing up on scheduled dates,” Spindler said.

Trimmers must show up with their proper documentation, including their Marijuana Enforcement Division Occupational License and corresponding badge. Spindler views it as a good sign if they can at least manage that.

But the requirements for the job don’t stop there.

“For our company, it’s attitude,” Spindler said. “Most people are recognized in this business for being easy to work with.”

“I’m looking for someone who has an interest in a long-term career in the industry,” she said. “Somebody who is excited to be here and who is willing to go with the flow and find their place naturally.”

She also wants candidates who are satisfied doing manual labor – but are meticulous, too.

“When we’re trimming, there’s a lot of small details,” Prisoc said. “It’s really tedious. So we want someone who isn’t going to be bored with that and is going to pay attention to those fine details.”

When Abel began his business, he found most of his trimmers through word-of-mouth connections.

Now he advertises in local newspapers, on social media and through his company’s website. He tried to recruit trimmers through Alaska’s online job bank – but his ads were yanked because the system is federally funded.

“Just because we’re a cannabis business, we are limited on how we can advertise,” Abel said.

Spindler said the trimming operation supervisor advertises a running list of company events on L’Eagle’s social media platforms so people are informed of an upcoming harvest and can sign up beforehand.

AltMed’s Prisoc said she mainly posts ads on websites such as ZipRecruiter and Indeed.

The company also has an employee referral program: Staffers are paid a $250 referral bonus if a contact works out.

At Greatland Ganja, Abel’s trimmers go through a two-week training period during which they aren’t left alone.

He has an experienced employee monitor new hires to watch their production – and because he’s cautious about losing any product.

“It’s kind of like a bank,” Abel said. “We deal with a high-value product.”

The trimmers also shadow one of the lead trimmers or the manager. Greatland Ganja has rigid standard operating procedures for every step of the process, beginning with how the buds are cut and ending with how they’re stored.

“We’re very particular about the process so the terpenes and trichomes aren’t damaged,” Abel added.

He conducts a review after the trial period and then, when appropriate, gives raises after each review period.

“With trimmers, it’s about if they’re really, really productive, making sure you give them the right raises and the right feedback,” Abel said.

It’s also important that trimmers feel they’re as much of a part of the team as everyone else.

“That kind of stuff is as important as pay,” he added.

Trimmers can inform the grower if the flower meets the company’s standards, for example.

“So we train them to look for certain things as far as if the product is coming out well and to give feedback on the harvest,” he added.

Once trimmers are hired, L’Eagle pays them by the hour, not the pound, as some in the industry prefer.

“We don’t want them to feel stressed out to have to do so much that day,” Spindler said. “The trimmers love performance, don’t get me wrong, but I personally feel the quality of the trim suffers when speed is the only thing that matters.”

Spindler will watch new hires to see if the trimmers respond to the training they’ve received and make sure they aren’t destroying the product.

“Here we’re more worried about quality than speed,” he said.

Over time, the trim managers will watch new hires’ productivity and compare it with that of more seasoned trimmers.

An experienced employee stands or sits with the new hire and observes throughout the first week. The new trimmer is given pointers on basic techniques as well as more refined instructions on how to trim a specific strain.

“I try really hard to make sure that if anybody’s struggling with a certain strain that I take extra time to show them different techniques,” Prisoc said. She’s found it takes about two weeks for a trimmer to become proficient at trimming a certain strain.

AltMed also pays trimmers by the hour, not by the pound. One reason behind that is a trimmer might get pulled away for another task while they’re on the clock.

“If this trimmer’s getting paid by the pound and he gets pulled away to help someone out now, he’s losing that incentive for the whole day,” she said.