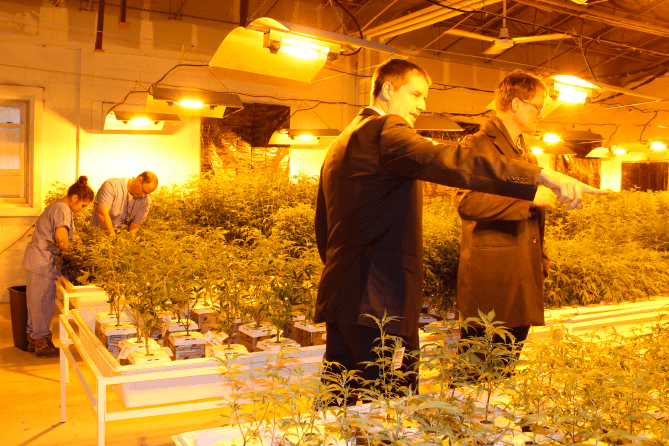 But even veteran cannabis business owners shy away from some very visible community institutions: churches, synagogues and other religious organizations.

The reason is understandable, given that the religious community is sometimes at the forefront of opposition to marijuana businesses. In Detroit last December, for instance, several churches organized a coalition to shut down area dispensaries. And earlier this year, the Mount Cavalry Christian Center organized demonstrations against a marijuana retail store in Seattle, following the group’s move in 2014 to join a lawsuit trying to shut down the same shop.

Despite cases of church-marijuana conflict, the two aren’t natural enemies. In fact, religious groups have come out in favor of marijuana (usually medical) legalization. And some marijuana retailers have successfully partnered with religious groups on food drives and other humanitarian efforts, accumulating community credibility in the process.

“I think we automatically assume too many things in the industry about others around us. The church or religious organization in your community is no different than your neighbor who runs a print shop,” said Meg Sanders, CEO of Mindful, which operates several medical and recreational cannabis businesses in Colorado and is opening a dispensary in Illinois.

Employees at Sanders’ stores habitually reach out to a variety of neighborhood organizations, including churches. They also make contributions to church-sponsored food drives, soup kitchens and other charitable organizations.

While companies like Mindful attempt to build bridges with the religious community, it can work the other way around as well. Roughly 60 Christian and Jewish clergy in Pennsylvania, for example, formed Clergy for Compassion in 2015, giving a push to legalize medical marijuana in the state some powerful backers. (The effort was successful: Pennsylvania legalized MMJ through the legislature earlier this year).

Several major church organizations in the United States also have passed resolutions approving medical marijuana as an acceptable treatment, including the Episcopal Church in the United States way back in 1982. Others that have gone this route include the Presbyterian Church, the United Methodist Church, the Evangelical Lutheran Church in America, the Unitarian Universalist Association, the Progressive National Baptists Convention, the Union for Reformed Judaism, and the United Church of Christ.

That means any medical marijuana business entrepreneur hoping to operate in a certain town can approach houses of worship from these denominations and introduce themselves with little fear that they’ll be reprimanded for their line of work. That said, not every religious leader knows every resolution their leaders have passed. But those resolutions are available online. Finding and reading them before making first contact is a good idea.

Pastor Shawn Berkebile of the St. John’s Evangelical Church in Abbottstown, Pennsylvania, said any partnership requires planning on the part of the MMJ business owner.

“There are opportunities for relationships. If you find a common denominator, and are open about your mission and what you’re doing, there are churches that will work with you. But it has to be thought out,” he said.

Berkebile, a leader in the state’s Clergy for Compassion movement, believes that some churches will not only “tolerate” medical marijuana businesses in their communities, but will advocate on behalf of the businesses and the patients they hope to serve.

“We could be a source of advocacy for a dispensary. We can help them come out of the shadows. We can help people get access to them,” said Berkebile.

Sanders, for her part, advises business owners to approach religious leaders the same way they would approach other community institutions: as someone trying to be a conscientious and transparent community member.

“The best way to look at this is that you are no different than any other business in that you go to introduce yourself to the community in which you operate,” Sanders said. “Either visiting or calling by phone is fine. If you don’t get a response, go to an event that the religious organization will hold – take the time to go.”

Phytologie, a dispensary in Oakland, has forged a close and fruitful relationship with a church a few doors down from its location, City of Refuge Ministries, thereby strengthening its position in the community. The dispensary takes donations of basic necessities such as toiletries and clothes that church members pick up at the store and redistribute to needy local families and drug addicts who participate in a support group at the church.

“Religious people have done this type of work, so it’s only natural to call them if you want to get involved with these types of causes,” said Deborah Sadler, general manager at Phytologie and one of its sister dispensaries, the Cannabis Buyers Club of Berkeley. “Our patients are used to this. We constantly have full boxes of items ready to go.”

The dispensaries have also helped a Catholic church open a preschool for homeless kids, and through the holidays are constantly participating in food drives sponsored by local churches. Sadler added that not once has a religious organization turned down an offer of help.

“These types of efforts absolutely improve our standing in the community,” Sadler said. “It strips away any preconceived notions people may have had about us, and shows them who we really are.”

Many churchgoing or temple-going types also happen to be cannabis consumers. According to a 2013 poll from the Public Religion Research Institute, 45% of young Christians have tried marijuana. The survey also found that half of Christians aged 18-29 favored legalization. Even when all the age groups are considered together, a significant 39% of Christians support legalization, compared with 54% who opposed it.

Some Jewish organizations have also been supportive of medical marijuana, and it’s even possible now to have kosher-certified cannabis.

Vireo Health of New York, which runs a vertically integrated grow and dispensary operation in the state, succeeded in getting the Orthodox Union – a prominent Jewish organization whose kosher certification is considered the gold standard – to certify its cannabis as kosher.

“Religion is about compassion, religion is about helping people in need, and sick people. So it makes sense that religious people would support the compassionate use of medical marijuana,” said Ari Hoffnung, CEO of Vireo Health of New York.

Hoffnung decided to seek the kosher certification after realizing that within New York’s sizeable Jewish population, some potential patients might be kosher observant. And these individuals would likely hesitate to try cannabis products unless they were certified as kosher.

“The certification removes a dietary barrier for patients,” Hoffnung said.

Brian Fox, CEO of Cannovations, a multistate dispensary business, also had Jewish consumers in mind when he applied for four dispensary licenses and a processing permit in counties in Maryland with relatively large Jewish populations. His Maryland manager, Jessica White, has already been in contact with the Orthodox Union about getting kosher certification if the company wins a license.

“The rabbis we spoke to were all very knowledgeable about cannabis,” White said. She also planned to reach out to local synagogues. But they called her first, White said, asking when she could come to speak to their congregations about medical marijuana.

“A lot of churches and synagogues don’t have the stigma against marijuana. They see their congregants who are sick and suffering and have aches and pains, and they want to see them get help,” said White, an observant Jew whose children attend a Jewish day school.

Indeed, religious organizations less often see dispensaries as a bane, but rather as a business with a like-minded goal: compassion and easing the suffering of others.