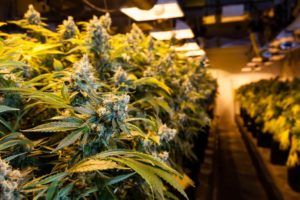 As the coronavirus pandemic plunges the U.S. economy into a sharp downturn, cannabis cultivators are managing finances by rethinking capital improvements and finding any area possible to lower costs.

Although demand remains strong for marijuana in many state markets, prudent cannabis cultivation executives are planning for the worst and tightening their belts.

Some have become more self-reliant when it comes to maintaining and repairing machines, while others are mixing their own sanitation chemicals and reusing personal protective equipment out of necessity.

Supplies for sanitation materials such as bleach and personal protective equipment, including gloves, have either become more expensive or difficult to find.

To help defray those costs, management has become more strict in how, for example, workers are using their gloves.

“Everyone got into a very relaxed state (before the pandemic) because there was no shortage of materials,” Summs said.

One strategy to save money on supplies: Summs will look at the label of a brand-name product and, instead of paying a premium for the name, he identifies the active ingredient, or chemical, and sources it directly.

Costs for equipment maintenance and replacement can be managed by training workers to understand the machines and how to repair them, rather than calling a technician or flat-out swapping out the old part for a new one.

“A lot of it can be salvaged for a lesser cost,” Summs said.

In his operation, employees have a working knowledge of several systems, including dehumidification, HVAC and air handlers.

He recommends first consulting the owner’s manual, then contacting the supplier to learn how to fix the equipment. If that fails, there’s always YouTube.

Summs feels as though Oregon’s market has recovered from the low wholesale prices growers faced a year ago.

While the company did temporarily cease expansion when the outbreak began – Otis Gardens was set to spend about $100,000 to expand its indoor facility another 1,000 square feet – that build-out is back on schedule because it will help to meet the needs of the market.

When the pandemic hit, Otis Gardens reduced the price of its wholesale cannabis flower by about 10% and worked with retailers to ensure consumers also saw a reduction in price.

That was done out of charity to the customers who might have lost their income, Summs said.

Owners do it, all if needed

In Albuquerque, New Mexico, Drew Stuart, owner of cultivation and retail operation High Desert Relief, said although he’s had to reduce staffing somewhat, sales of medical marijuana have been strong.

“It seems that people are choosing to spend their money on their medicine,” Stuart said.

Stuart said that he runs his shop about as lean as he can, and if demand did start to dry up, the only way he could cut costs would be workforce.

“If we did, I’d be on the scales,” he said. “We’d have to go back to the upper management doing everything, running an absolute skeleton crew.”

To manage the lack of sanitation supplies, once bulk-supply stores started running out of alcohol, his team ordered 99% isopropyl alcohol and watered it down themselves.

Stuart recently ordered eight gallons of alcohol for $400. That’s $2.56 an ounce. He was getting it for 32 cents an ounce before the pandemic.

Nitrile gloves, which employees go through quickly, have also doubled in cost because of high demand.

His team also was cleaning and reusing personal protective equipment, but availability has stabilized and Stuart has a continuous supply. However, the cost per units on jackets and masks has also drastically increased.

But in the meantime, he’s not worried if he has to go back in the grow room.

“Everybody who grows is a jack of all trades, and they would be able to keep the lights on,” he said.

Santa Barbara, California, marijuana grower Autumn Shelton, the owner of Autumn Brands, said when the COVID-19 outbreak began, her company considered not updating its buildings and putting a hold on buying any new equipment.

But after thinking it over, the company decided to do the opposite.

It’s moving forward with the $150,000 in purchases for new equipment it had planned in the first half of this year.

Autumn Brands is investing in a temperature kiosk that costs about $2,000 to ensure no one enters the premises with a fever.

“We are generally a very frugal company that only purchases what it needs or that can truly provide more efficient processes within four-six months time,” Shelton said.

But the company reported a 9% increase in revenue for the first four months of the year compared to its 2020 projections.

One hit to the pocketbook: The company initially had two production employees splitting sanitizing shifts in response to the pandemic.

But now, one full-time employee focuses on sanitizing all high-touch areas throughout the day instead of helping grow cannabis. The company pays that employee approximately $50,000 a year.

“It’s definitely an added cost to have a clean and healthy environment,” Shelton said.

Shelton also pointed to certain areas in California, such as Santa Clara County, where recreational cannabis wasn’t deemed essential as an example of a cause for concern and something to watch in the future.

By that he means, for instance, facilities that had built out 100,000 square feet but had the capacity to run only 20% of it and could no longer burn through that much operating capital.

The illicit market, particularly in Canada, is still thought of as providing a superior product, and at a lower price, than the licensed market, according to Singh.

One way to stay afloat during this time, he said, is for cultivators to focus on quality and make the necessary investment.

“To produce a quality product takes putting a little more into producing that product,” Singh said.