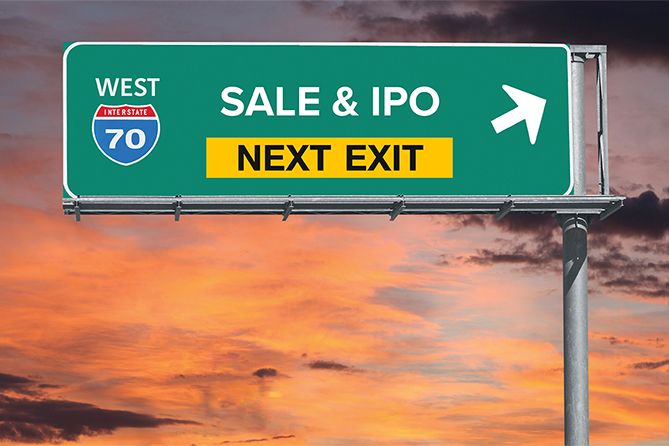 The pace of change in the North American cannabis industry, particularly in the United States, is so fast that consolidation is an inevitable byproduct. It’s not necessarily a case of eventual winners and losers but certainly bigger buyers and smaller sellers as the industry matures and the scramble for market share intensifies.

So how do companies—particularly those newer to the industry—position themselves to take advantage of the opportunities that may come out of such consolidation?

One of the things they can do is make themselves as attractive as possible to potential buyers, preferably early in
their existence.

“There is an exit opportunity for private companies, and the exit is today,” Scott Greiper, president of New York-based investment group Viridian Capital Advisors, told the audience at MJBizConNEXT in New Orleans in June. “There are buyers in the hall.”

But would-be acquirers are not going to buy your company unless you have a well-run business in the first place. It isn’t enough simply to declare your exit strategy is to be acquired when you don’t have the building blocks in place to be a desirable target.

Asked if the company had an exit strategy from its inception in 2015, he emphatically replied no.

“Back in 2015, nobody really had a vision of being a larger company, nobody had really done an RTO (reverse takeover) in Canada,” he told Marijuana Business Magazine. “Nobody had bought a company of size.”

Instead, the focus for Grupo Flor was always on building gradual, consistent profitability through its real estate operations. Henderson predicts the company will be profitable in the fourth quarter of 2019.

Now, Henderson is doing the rounds with Canadian investment banks, possibly with an eye toward going public as one form of exit from the private space. But his options remain open.

“We could go public if we decide to do that. We are running down that path, keeping the pulse on that,” he said. “But we are also being circled as an acquisition target, and so we have to be flexible, see how things might change; it’s just as likely either option.”

For now, Grupo Flor’s focus remains on consistent profitability from its operations as the company simultaneously continues to raise money from investors—it is currently exploring debt options to raise capital and will continue to seek either equity or debt raises next year.

Green Flower Media, a cannabis education platform, is not as far along in its development, but thoughts of potential exit are still there, CEO and co-founder Max Simon said.

The Ventura, California-based business, which provides certification programs to professionals in the cannabis industry and training courses for companies, just completed a $20 million Series A raise, which it will use to expand content and triple its number of employees.

But the current focus is on building an attractive company—through securing funding, expansion and hiring the right employees—whatever the eventual outcome might be.

“We are still quite a few years from an exit—whether that means going public or being acquired,” Simon said. “That will be based on the scale of growth over the next few years.”

One company that has successfully exited the private space is Jushi, a Florida-based cannabis firm that focuses on dispensary operations and brands.

Part of the thought process on the timing of going public was a practical one. Jushi wanted to acquire a Pennsylvania company, Franklin Biosciences, which operates 12 dispensary licenses in the state. Jushi was unable to secure the deal by staying private, however. It closed the $63 million transaction in July.

But going public had always been the plan.

“We would have liked to stay private longer, but it was always part of our game to go public,” Mauff said. “We could not have gotten regulatory approval in Pennsylvania by staying private.”

Now, the focus on building a successful company must continue as new phases of consolidation in the industry emerge, Mauff said. The game isn’t over just because one exit strategy has been achieved.

Big players, such as those in established consumer packaged goods companies, will be looking for strong management teams that run cleanly audited companies in states with hard-to-get licenses.

“That will be what I call ‘the big gobble,’” Mauff said. “The likes of beverage companies will be coming in looking when they are physically allowed to buy—either through federal legalization or normalization.”

Such big retail companies may well come in, agreed Ralph Morgan, CEO at globally focused cannabinoid company Collective Hemp, but you might do well to position yourself as a potential target in conjunction with competitors you trust.

“It is by investing in peers and collaborating (that you will find success),” Morgan said. “It is your weakest competitors who are the biggest threat.”

Simply expecting to be acquired by big pharma or big industry is “naïve at best,” Morgan said, making an analogy to the eventual fate of mom-and-pop hardware stores when big-box competitors came to town.

“Home Depot and Walmart came in, but they did not buy the stores, they simply made them uncompetitive,” he said. “This is absolutely the tip of a new industrial revolution. A lot of people will therefore not survive, or they will be the casualties.”

But before entertaining any thoughts of exiting the space, cannabis companies in every sector—especially those starting out—would do well to observe the following, Morgan noted:

Invest in human capital: “It’s important to surround yourself with the brightest people, and these are people who are not necessarily in your normal circle.”

Get your financial house in order: “It was a long, long painful process,” Morgan said of the eventual sale of his former company, Organa Brands, to Slang Worldwide. (Slang acquired Organa for roughly $200 million before starting to trade on the Canadian Securities Exchange in January 2019.)

Have a strong moral compass: “There are so many decisions to be made, and so fast, you cannot afford to be negotiating the value of them with your partners or colleagues.”

Save time on negotiating: “Make partnerships. Negotiate as fast as you can. Be as generous as you can,” Morgan said. “High tides raise all boats, so you can row in the same direction.”

And, finally, in an era when everyone talks about the importance of brand equity and brand loyalty, companies must somehow distinguish their brands in a very crowded market.

One of the primary drivers of what Greiper at Viridian called “the mania of M&A” is the hemp industry after the passage of the U.S. Farm Bill in December 2018.

But the industry and, notably, the focus on CBD cannot support the thousands of brands out there when it is essentially dealing with a commoditized and now legal product, he said.

Instead, Morgan at Collective Hemp said companies are going to need “something that goes beyond the ingredient.” He described this as something unique and branded that can come from intellectual property.

“You don’t buy a Prius because it is sleek and sexy, (but because) it is an extension of your values,” he said. “Every brand has a cause that is sincere, that is meaningful, that can differentiate. You need to create a brand that is an extension of someone’s personality, their values.”

It’s a competitive industry out there, and a potentially very lucrative one to be sure, but maybe, ultimately, for only a relatively few players.

Cannabis veterans advise those starting out to get a solid business model together and execute well. Do not be afraid to collaborate and show at least a path to profitability as soon as you can.

That way, at least, you might have an opportunity to exit. Conversely, focusing too much on exit from the start, at the expense of running as well executed a business as possible, could be your downfall.