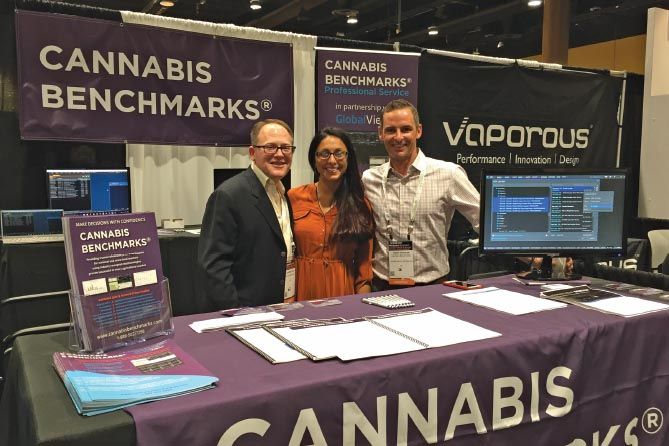 “Statistics are like bikinis. What they reveal is suggestive, but what they conceal is vital.”

That adage – linked to a deceased business professor from New York’s Baruch College – could serve as the catchphrase for a specialized segment of the cannabis industry: data crunchers.

This newly emerging sector is one of the smallest in the marijuana trade. But it is perhaps one of the most important. It’s composed of a handful of companies focused mainly on data analytics, which involves collecting and dissecting sales figures, wholesale prices, customer demand metrics and other types of business information.

Those numbers can be utilized in a host of ways, many of which are already taken full advantage of by other industries. Think of Wall Street analysts who track industries ranging from automobiles to aerospace.

The marijuana industry, by contrast, is just waking up to the power of data analytics – information that can be used to unearth new markets and exploit niches in existing markets.

“From a retail perspective, it helps you fill your shelves with products that you know are going to be in demand, but also how to price them and how to market them,” said Giadha DeCarcer, the founder and CEO of Washington DC-based New Frontier Data, referring to her company’s services. “Our value add is … to predict where the industry is going, and how investors and operators should act, and how that will impact their businesses.”

Such analytics apply to nearly every aspect of the marijuana industry, including basic information for growers – such as which strains are in high demand and what they’re worth to customers – and, by extension, retailers looking for popular products.

“We are like the Kelley Blue Book of legal wholesale cannabis,” said Jonathan Rubin, the CEO of Connecticut-based New Leaf Data Services, which produces Cannabis Benchmarks, a weekly report that focuses on wholesale marijuana prices in 16 state markets.

And it’s not only plant-touching companies that are finding value in cannabis-related data services. Ancillary companies and investors are a big part of the customer base for data-focused firms like New Leaf and Frontier, in part because sophisticated executives know that numbers are simply part of the game and that data analytics can be invaluable business intelligence.

In Washington state, two companies focus solely on that market: 502data.com and Top Shelf Data. Both rely on large data sets accumulated and released by the Washington State Liquor and Cannabis Board. The broader data companies, by comparison, have extensive multistate industry networks through which they gather their business intelligence.

None of the existing marijuana data companies cover the entire cannabis sector, mostly because there’s currently no solid avenue for collecting industrywide data.

“We’d like to be able to do something like this on a nationwide model, but we can’t, because other states don’t make all this data publicly available,” said a Top Shelf Data founder who didn’t want his name used.

By contrast, companies like BDS Analytics and New Frontier partner directly with retailers, growers and other cannabis firms that can provide firsthand transactional information, such as pricing data and what types of products and strains are selling well.

“We partner with dispensaries, they provide us their (point-of-sale) transactional data, we do a tremendous amount of work with that,” explained Roy Bingham, co-founder and CEO of BDS Analytics. “Then we provide that back to the dispensaries, so the dispensaries can then say, ‘Now I understand my own trends.’”

That’s one of three core services that BDS provides. The other two include investor-related intelligence and consumer insights – essentially customer-related data involving purchases and related information that companies can use to hone their products and marketing.

Regardless of their differences, there is strong demand for what these companies do. No firm is more than a few years old – most were founded in 2014 or 2015 and fully launched their services a few months later. The newest of the batch, Top Shelf Data, was founded in November 2016 and is already experiencing a “strong” market response, its co-founder said.

In 2016, New Frontier saw a whopping 700% growth in subscribers for its online data portal, Equio, and the company’s email newsletter, DeCarcer said. The company, founded in 2014, says it has several thousand clients that use the Equio portal and buy its published industry reports and customized studies. That’s on top of about 25,000 subscribers to the company’s newsletter.

New Leaf, founded in 2014, launched its services in February 2015 and has seen consistent customer growth every month over the course of 2016, Rubin said. That includes a current total of about 150 customers who pay for either the company’s custom analytics services or more in-depth reports. New Leaf also has about 4,500 subscribers to its weekly wholesale price report.

Even 502data.com, one of the smaller data suppliers, gets about 250,000 page views a month for its website from roughly 20,000 unique users, said founder Jason Welty, who also owns and runs a recreational marijuana shop in Washington.

Welty’s business model differs from other companies in that he has relied on paid advertisers for the website to generate revenue. He did, however, launch a “pro” version of the site in late 2016 with additional data breakdowns, which is available for a monthly subscription fee starting at $49.

Most of these companies offer a sampling of their services for free, such as New Leaf’s weekly Cannabis Benchmarks, but the central business model is that in-depth analysis comes at a cost. For example, New Leaf also offers a “premium” report, which starts at $900 a year for a subscription, as well as a “professional” report, which starts at $2,400 a year, and custom analytics and reports priced at $10,000 or more.

For the larger companies – BDS, New Frontier and New Leaf – the biggest initial hurdle was establishing a data collection network.

It took BDS nine months of work to build its data analytics software, Bingham said. It took New Leaf several months as well, and the company is still building its information-gathering network.

“We have former growers and former buyers that had their own networks that now work those networks to confidentially collect, ‘What deals did you do this week? What was the volume? What was the price?’” New Leaf’s Rubin said.

New Leaf’s data collection network also extends to price reporters on the ground in multiple markets, cultivator and retailer relationships, and partnerships with other industry stakeholders, Rubin said. And every week, he added, his staff is up late Thursday preparing the weekly Cannabis Benchmarks report that goes out the next day.

Another big obstacle for many data firms has been educating potential customers, Bingham said.

“Companies in this industry are still small,” Bingham said. “Therefore, when we come along with a fairly sophisticated service, they don’t necessarily have the time or the background or experience to think about how they would use it.”

Rubin agreed, saying, “The reality is that we spend half of our time educating the market and the would-be customer as to what we do and why it’s important.”

But that’s already begun to change as the industry matures and brings in more experienced executives and managers, Bingham added.

“We’ve seen a big difference between now and nine months ago, even,” he said.

The most obvious trend in the cannabis data business is the growing demand for more business intelligence, which should equate into more demand for companies that provide such intel.

Rubin also expects more companies to be looking into data analytics as overall competition increases in the cannabis trade.

“A very small percentage of the industry is using data optimally, or even understands what it means to do that,” Rubin said. “But flash forward a few years, and anyone who’s in the top half of the most successful companies, data analytics will play a large role in most of the industry’s success.”

Rubin also believes cannabis eventually will morph into a regulated commodity, which means data will become a linchpin for market-watchers.

“Over time, as (the market) matures, it will be very similar to the way buyers and sellers handle wheat and corn and soybeans and natural gas and crude oil,” Rubin predicted.

New Frontier’s DeCarcer thinks this increase in demand will lead to better data-collection methods, which is something she expects bigger players in the marijuana trade will begin demanding before long.

“The communication between technology platforms is going to be key in order to provide good data,” DeCarcer said. “And stakeholders in the industry have awakened to the need for business intelligence. They need data. And the only good data that is reliable is collected in some form of streamlined technology platform.”

It remains to be seen whether that will mean a greater meshing between point-of-sale software systems, or a business opening for yet another tech firm that would like to simplify and streamline data collection.

Top Shelf Data is a good example of the kind of upstart rivals that slightly older companies like BDS and New Frontier can expect. Top Shelf just got started a few months ago. It’s already making inroads in Washington, and its founders are contemplating expanding if they can figure out a good source for data in other markets.

“Top Shelf Data is a perfect example. They just popped up in the past few months,” 502data.com’s Welty said. “Obviously, companies are going to come in and try to do it. It’s getting some traction and figuring out what your monetization strategy is.”