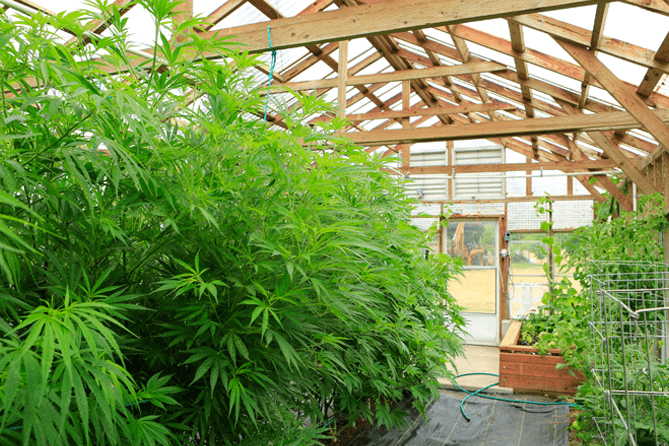 Greenhouses aren’t just for poinsettias and tomatoes anymore. These days, some of the biggest, priciest and most high-tech greenhouses are being designed and built specifically to grow marijuana.

The majority (63%) of commercial cannabis grows are located exclusively indoors, according to new statistics in the 2016 Marijuana Business Factbook. But greenhouses are becoming much more popular.

Early last year, for example, only about 1% of commercial growers used exclusively greenhouses for their crops. Over the past 12 months, that number jumped to 8%. And that doesn’t even include operations that use a combination of indoor, outdoor and/or greenhouses.

A lot of that has been driven simply by the overwhelming cost of electricity for grow lights in indoor facilities, which can easily run into the hundreds of thousands of dollars for large operations. By some estimates, greenhouses use between 75% and 90% less energy than indoor grows, simply because they use the sun as a primary light source.

There are plenty of other benefits as well, depending on how much a cultivation company wants to pay. Supplemental lighting can ensure a greenhouse grow runs 12 months a year (despite occasional cloud cover or bad weather), automation can help cut down on labor costs, and high-end environmental controls can help fight off pests and mold.

“The demand in the cannabis space is growing rapidly for greenhouses. That’s where the market is going long term,” said Zev Ilovitz, president of California-based Envirotech Greenhouse Solutions. “The driver for greenhouses is efficiency, be it cost or the environment. Those are the drivers that people are looking to get into: long-term sustainable facilities.”

But that doesn’t mean anyone’s hurting in the greenhouse sector. Rather, it’s the opposite.

Jonathan Valdman, the owner of California-based Forever Flowering Greenhouses, said his company’s client base is more than 95% marijuana growers. Forever Flowering’s revenue is now solidly in the millions annually, up from the hundreds of thousands in 2007 and 2008.

Ontario-based GGS Structures, which gets only about 15-20% of its business from cannabis companies, began servicing the industry about 15 years ago. Its cannabis-related revenue is now easily in the millions of dollars annually, said company president Leigh Coulter.

California-based Next G3Neration – which launched halfway through 2015 – has already hit the $5 million revenue mark with about 15 clients, and it expects to do even better this coming year. And Colorado-based Nexus Greenhouse Systems, which was founded in 1967 but just began working with cannabis clients three years ago, saw a 30% increase in marijuana-related business in 2015 over the previous year.

“It’s an emerging market that will continue to expand across the states,” said Tom Vezdos, the vice president of the commercial division of Ohio-based Rough Brothers, an 84-year-old greenhouse company that started taking on cannabis clients in 2013.

Prices for greenhouses run the gamut, from a few hundred thousand dollars apiece to over a million, depending on the size, quality and whether the grower wants any bells and whistles.

The main questions for growers: How much can you afford, and how much do you have to invest in a greenhouse? In general, the more a company puts in up front, the bigger the reward on the back end.

As with any cannabis-related sector, greenhouse businesses face a host of challenges. One of the most immediate is simply consumer education. Often times, clients that want to switch from a warehouse to a greenhouse don’t really know what they want or need to pay for, said Forever Flowering’s Valdman.

“If you weren’t growing pre-1990, your base of cultivation knowledge is really indoors,” Valdman said. “We’ve been educating people on why sun-grown is superior to lamp-grown.”

There’s also the matter of educating clients on what options there are for greenhouses, including high-tech automation for irrigation and fertigation, Vezdos of Rough Brothers said.

“You have people that are sitting there irrigating with a garden hose and a sprayer. It’ll be as simple as that,” Vezdos said. “Once they do it for a while and realize what a pain in the ass it is, then they’ll start asking some questions and then be like, ‘Oh, I didn’t realize you could do that.’”

Other standard obstacles for greenhouse companies include zoning regulations (depending on the location and where a client wants to construct a greenhouse), odor control, security requirements and navigating different state-by-state laws in the U.S.

One of the biggest is local licensing. Sometimes that process can drag on for months, with mountains of paperwork and various inspections required before a greenhouse is formally approved to start growing.

“The permitting process for greenhouses is quite lengthy and complex,” Ilovitz of Envirotech said. “It takes time, and that can throw a project off completely or delay it, and it becomes a delay on the operator as the timeline drags on and the costs keep rising.”

The Rise of Greenhouses

Given the inherent benefits of greenhouses over warehouses and, arguably, even over outdoor grow sites, many in the sector expect their businesses to keep booming.

“A greenhouse in its ideal environment is the most efficient way to go, even more efficient than outdoor, because it’s going to use less water,” said Forever Flowering’s Valdman. “A greenhouse acts as a form of crop insurance because it will protect you from rain, from freezing and from dust.”

And the sky is the limit in terms of growth, given that most commercial cultivators are still using warehouses. With energy use becoming a bigger concern across the industry, greenhouse companies are poised well to capitalize in the future.

“There’s no doubt the energy savings of greenhouses is definitely a big push right now,” said GGS’s Coulter. “As you get into regulations in states like California, which are exceptionally greenhouse-friendly states, I think you’ll see more of a trend towards greenhouses.”

Not only will greenhouses continue to nudge into warehouse market share, they’ll also get larger and more sophisticated, many expect.

“The trends are exactly what happened in the vegetable market: The facilities are going to get bigger and more high-tech,” said Rough Brothers’ Vezdos. “You’ll see the scale of the businesses increase.”

Plenty of current cannabis greenhouses are no larger than 10,000 or 20,000 square feet, but the greenhouses of the future will be much larger.

Matt Cohen, the founder of Oregon-based TRiQ Systems, agreed. His company specializes in greenhouses for cannabis growers, and he said the industry is going to end up demanding efficiency, high yields and potent marijuana. And growers are going to have to develop brands.

All of this will be necessary for a company to survive, he said.

“The new entrepreneurs that we deal with realize that if they want to be building a brand, they better have the infrastructure to support that brand,” Cohen said. “The companies of today… are building these modern, high-tech integrated systems.”

As with nearly every aspect of the cannabis industry, the competition will most certainly increase as traditional greenhouse companies warm up to cannabis and the market expands with new states coming online.

Numerous greenhouse companies have entered the market in just the past year, some of them with extensive histories in traditional agriculture.

Still, existing companies in the space are in a good position to pad their bottom lines regardless of how competitive it gets.

“I could definitely see it getting up to 25% of what we do,” said Vezdos, who estimated that marijuana projects currently make up about 10% of Rough Brothers’ business.