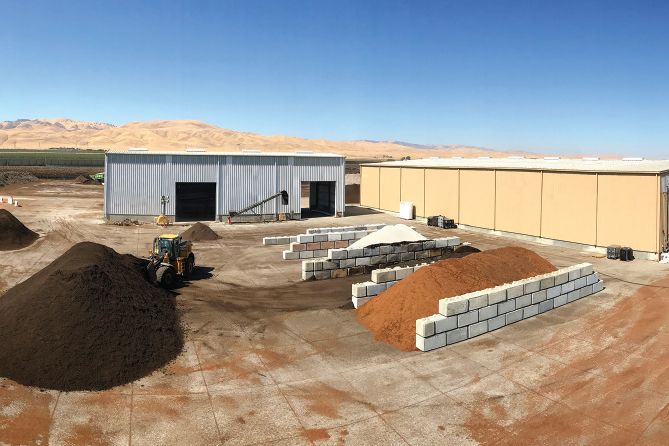 It’s no longer enough to simply grow and sell marijuana. As the industry has exploded – in popularity and legality across the nation and the globe – growers and retailers have begun focusing more on quality.

That’s where nutrient and soil companies enter the picture. Their products help bolster cannabis potency, flavor and crop yields, and these businesses have become a virtual necessity for professional growers.

Many of the sector’s industry leaders are easily generating tens of millions of dollars or more in annual revenue – think lawn and garden care giant Scotts Miracle-Gro. But even some of the newer players are already making a killing as more niches are explored.

Take Australia-based S.J. Enterprises, producer of the Cyco Platinum Series brand of nutrients. The company’s top-selling cannabis nutrient product, Ryzofuel, is booming in popularity with growers because it utilizes Tasmanian kelp instead of Norwegian kelp, said Deonna Nieves, one of S.J. Enterprises’ U.S. sales representatives. She said the latter is used in most other common
MJ nutrients.

“The difference is … it has more natural growth hormone than Norwegian. Five times more,” Nieves added.

As a result, the company’s nutrients are now carried in roughly 800 hydroponic retail stores in the United States, according to Nieves.

“We’re talking over $1 million a month in sales, easily,” she said, emphasizing that’s an estimate for only one of the company’s seven U.S. sales representatives.

S.J. Enterprises is far from the only nutrient or soil company riding the green rush, especially because large-scale commercial grows proliferate around the United States and Canada.

Advanced Nutrients, based in Abbotford, British Columbia, is among the oldest and most established companies in the cannabis business. It has a presence in 95 countries and is on track to ring up $105 million in sales this year, said CEO and owner Mike Straumietis.

And while smaller-scale cultivation operations with 100 grow lights or less still account for about 60% of the company’s sales, that’s probably not going to last, Straumietis predicted.

“The tide is going to change very quickly here. Because the (licensed producers) are huge. We’ve got guys out there with 4,000 lights … and they’re expanding even more,” Straumietis said. “The writing is on the wall.”

That means more demand for supplies that will give those cannabis producers high-quality cannabis that allows them to compete for market share.

Several dozen companies already specialize in cannabis-specific nutrients, fertilizers or treated soil for growing. And even more retailers and distributors carry those products. Most retailers work with brands such as Advanced Nutrients and S.J. Enterprises’ Cyco Platinum Series.

Many – if not most – of the manufacturers don’t even sell directly to growers. Instead, they sell to retail shops or distributors like Oregon-based Savant Plant Technologies.

“The retail partners are a big piece of this pie. They really grew this market, and they’ve been the shepherds of it for the past 20 years,” said Renee Shoppach, sales director at Botanicare, an Arizona-based cannabis nutrient producer.

For wholesale distributor Savant, only about 35% of the company’s sales are for nutrients or soil, said CEO James Knox. The other 65% represent other types of grower supplies.

Knox also runs a pair of hydroponic stores in Oregon, simply because smaller growers typically don’t purchase enough in bulk to justify the expense of him delivering soil or nutrients directly.

“I’m able to hit both fronts. I have retail stores where the smaller growers can go, but Savant is here for the big dogs that need to do big work that, truthfully, can’t afford to buy at retail stores because that price point isn’t affordable,” Knox said.

Another West Coast company – one that specializes in soil – is California-based Sanctuary Soil. It has a sister company that supplies organic fertilizers, California-based Mission Fertilizer. Mitch Davis, an owner of both companies, said Sanctuary Soil delivers to “literally hundreds” of cannabis growers in four western states, primarily California.

“Five years ago, it was probably mostly in the three counties (of the Emerald Triangle): Mendocino, Trinity and Humboldt,” Davis said. “I would say that only represents half of the soil, or less now. … I’d say year over year, in the last three years, we’ve probably doubled delivered soil loads.”

And, Davis added, his company’s soil sales are in the “tens of millions.”

Arizona-based Botanicare, founded in 1996, also has revenues in the tens of millions, Shoppach said. The company was doing so well it was acquired last October for $40 million by the Hawthorne Gardening Co., a subsidiary of Ohio-based Scotts Miracle-Gro. (Scotts has also purchased four other MJ-focused companies, including General Hydroponics and Gavita Horticultural Lighting.)

S.J. Enterprises, for instance, distributes its Cyco Platinum Series of nutrients in the United Kingdom, Spain and Canada aside from its home country of Australia and the United States.

Advanced Nutrients has manufacturing centers or warehouses spread out across the United States and Canada as well as Bulgaria, Germany and Spain.

“We’re all over the world,” Straumietis said.

One of the easiest hurdles for each of these nutrient and soil companies to identify was simply keeping pace with demand, and the growing pains that accompany rapid expansion.

“With all the growth and as big as we get and all of the improvements we make, every year it gets wiped away. Literally, it’s been nonstop trying to scale. Literally, nonstop,” said Sanctuary Soil’s Davis.

That’s changed in recent years, Davis added, due to the increasing popularity of greenhouses, which has turned his formerly seasonal business into a year-round cycle.

“If we look back three years ago, we would be in a slowdown time,” Davis said in August. “This would be a time for us to regroup and get set for next season. Well, it hasn’t slowed down. We’re still busy and we’re delivering to a lot of greenhouses that are just starting to function year-round.”

Shoppach agreed that scaling appropriately is one of the biggest challenges Botanicare has had to confront.

“When you’re seeing doubling of revenues in five years, your business has to prepare for that,” she said, referring to how much Botanicare’s sales surged in the past half a decade. “Just ensuring a consistent supply chain, ensuring that the product is reaching the consumer in a timely fashion — those are always challenges for any business that’s growing as fast as the cannabis sector.”

One of the biggest issues for soil producers especially – it’s arguably less of a hurdle for fertilizer and nutrient companies – is keeping materials in stock to produce soil that’s specifically tailored for marijuana.

“We’re literally bringing in ingredients that we don’t produce now for next season,” Davis said, noting the company must order materials such as coco coir from Asia, peat from Canada and multiple other components it uses to produce cannabis-friendly soil.

“We’re talking 40-foot containers, and we’ll bring in 150 of those oceangoing containers just of that one ingredient,” Davis said.

Another issue many nutrient and soil companies face is convincing potential clients of the value of their product, especially when growers are set in their ways.

“Reaching the customer base is always a challenge for any company, especially when they do sell through such a vast network of partners,” Shoppach said. “We often will go at all measures, where they are at, forums, trade shows, social media. … We try to have as many conversations with our consumer base as possible.”

Advanced Nutrients’ Straumietis said many growers are trying to replace professionally made marijuana nutrients with homemade salts, which he said is a big mistake that will end up costing more in the long run because of lower yields.

“Guys are mixing … their own micronutrients, and they’re saving money by doing it. But they’re actually costing themselves money, because what they’re not looking at is what they’re pulling back in bud weight or extracts,” Straumietis said.

While many expect competition in the nutrient and soil game to ramp up in the near future, several also say the space will end up being dominated by a few major players. Scotts Miracle-Gro already is making such a play, with the acquisition of Botanicare and several other companies, said S.J. Enterprises’ Nieves.

The word through the industry grapevine is that many growers are refusing to use Scotts products because of the company’s ties to Monsanto, said both Nieves and Straumietis. Scotts serves as the exclusive agent for the marketing and distribution of Monsanto’s herbicide Roundup.

Straumietis predicted that after the industry dust settles, only a handful of companies will be left standing.

“In the beginning, there’ll be more competition. Then there’ll be rollups, and at the end of the day, there’ll probably be three or four top brands, and one or two will have most of the market share,” Straumietis said.

Maturation, Partnerships as Customer Base Splits

As part of that consolidation, Shoppach predicted more acquisitions will probably occur, like that of Botanicare by Scotts Miracle-Gro. Alongside that will come professional partnerships and joint ventures.

As a byproduct, she and others agreed the customer base will undergo a polarization between huge corporate grows and small-scale boutique growers and hobby cultivators.

“The two different paths are going to work on different product offerings and will have different needs,” Shoppach said. “Botanicare is going to be … servicing a niche for the commercial sector, but at the same time we’re going to be modifying our home hobbyist systems.”

Sanctuary Soil’s Davis agreed: “We can’t customize for small mom and pops, but we can for larger users, and that seems to be where we’re moving with our business.”

As the cannabis industry matures, another thing to watch for is products honed by increased scientific research. Advanced Nutrients, for instance, is putting considerable time and money into developing new ways for growers to fight pests.

“Right now, there are no (federally) approved pesticides for cannabis. Zero. This is a huge, huge problem,” Straumietis said.

So Advanced Nutrients’ team of scientists is trying to find a way to get cannabis plants to kill pests by themselves.

“That is something we’re working on right now,” Straumietis said. “We’ve already sequenced powdery mildew, red spidery mites – those genomes have already been sequenced. … So now, what we’re doing is looking to where we can knock out how the RNA can deliver a message to DNA that self-destructs the organism.”