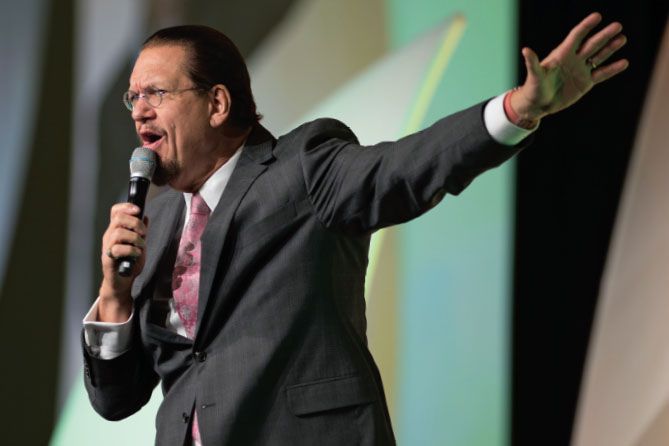 As half of the famed entertainment duo Penn and Teller, magician Penn Jillette has spent his career under the lights in Las Vegas.

From that vantage point, he’s watched the casino industry grow into a corporate behemoth, and the well-known Libertarian and free-market capitalist doesn’t want to see the marijuana industry go the same way. Jillette is hoping that the cannabis business can keep its spirit, mom-and-pop feel and free-thinking culture, avoiding the mistakes Sin City has made.

Marijuana Business Magazine spoke with Jillette about his thoughts on legalization, cannabis business regulations and how the industry can keep its magic.

You’ve never used marijuana. Why are you in favor of legalization?

I advocate the legalization of marijuana mostly so I can have a choice not to do it.

When something is done by force it’s much less gentle, much less kind and much less individual. I want the good side of people to be able to flourish. When you move something into the black market you have bad people involved in it. You have, by definition, people who are willing to do things that other people aren’t.

I hope that as marijuana becomes more and more legal we lose some of the bad and violent people but we don’t lose the passionate people.

In stating that point of view, when Teller and I did our “Bullshit” TV show about the legalization of drugs, a lot of people came in and said “this is irresponsible.” Allowing people freedom will always have people getting hurt. You have to take care of others. Freedom has to include the freedom to do things that society doesn’t think are the best use of your time.

With marijuana legal will there be people spending time smoking marijuana that otherwise might have done things that society thinks are more valuable? I guess statistically that has to happen. But I would be very, very surprised if that wasn’t balanced by the brilliant, talented, wonderful people whose lives have been ruined by going to jail.

What is your stance on regulating the marijuana industry?

I think that there’s no better regulation than a free market. McDonald’s is kept in line not by the government, they’re kept in line by the customers. When they were using their foam packing material, which people thought was not environmentally sound, they went right to their paper wrappers because of the free market.

I’m not sure the free-market solves everything. I’m not one of the free-market capitalists that believes there is some kind of panacea and everything’s going to be beautiful under a free market. I just think we should use force for as few things as possible.

When we see the legality, all the money that’s going to be flowing into the marijuana businesses, people that want to use it, it seems like the competition to put out the best product possible and to give people the best value is going to keep people in line without regulation.

Do you think regulations can combat some of the stigma around the industry though?

Oh, it definitely will. That’s the way it’s got to go and that’s the right way for it to go. Everybody agrees on it. But I don’t have to be really happy about it.

All regulations will do is what regulations have done in every industry. It will actually make things more lax. When there’s less regulation people are very, very careful because competition takes care of that. Any industry wants regulation because it gives them a bottom line. “As long as we’re this good we’re OK.” It becomes a race to the bottom of the regulation.

That being said, there should certainly be regulation to make it easy to keep marijuana out of the hands of children. I don’t think there’s very much of a moral argument that says that people under a certain age can’t make an informed decision on changing their chemistry that way. It should be easy for parents to have that happen. That regulation is so instant and everyone agrees on that so much there won’t be much argument.

Any other areas of the industry you think should be regulated?

The strange thing about marijuana, unlike other recreational drugs, is it doesn’t seem to me that you need that many health regulations because marijuana is just so incredibly safe. On the black market, you don’t have marijuana poisonings. There will be a lot of regulations put in place for things that just don’t exist.

There’s a lot of reasons to be afraid of contamination in drugs that are delivered another way. I guess there has to be some looking into dosage in edibles and having some idea of what people are getting there. Some standardization. Standardization would work as well as regulation.

This industry was founded on the backs of mom-and-pop businesses, but it’s becoming more corporate, and there are big fears that there will eventually be a huge wave of consolidation. How do you see this playing out, and is there any way for the industry to grow yet keep its roots as a business for the little guy?

I certainly hope that there are specialty niches that keep the mom-and-pop people in it. You see that on beer – which by the way I’ve also never tried – on sodas, on cheese. You see that on all sorts of things that people use.

We don’t just have Kraft Cheese Whiz. We have all sorts of wonderful artisanal cheeses and so on. And I hope that there’s enough differences (in the marijuana industry). One of the things that you’re seeing even in the medical marijuana stores is different brands, styles, flavors.

I hope it’s not like the “Bullshit” episode we did about bottled water, where a garden hose was exactly the same as the most expensive bottled water. I hope that there really are differences in marijuana and it’s not just delivering THC in the most direct way possible. That’s where I hope the mom-and-pop shops can live. The quality and the range and the variety.

It seems that as this comes out into the sunlight there should be a lot of variation in taste and delivery and style. But I hope that it keeps its funk. Keeps it interesting and fun.

Not only am I somebody who appreciates the freedom of marijuana, but I had a lot of friends in the past that grew marijuana and had that as their job. And I just hope that even when it’s legal these people can still, in Bob Dylan’s terms, live outside the law and be honest. I hope that with liberty doesn’t come mediocrity.