After a slight break, we’ve returned to megadeals in cannabis.

The big news this week was Curaleaf’s acquisition of Grassroots Cannabis to create one of the largest cannabis companies in the world, sending the company’s stock up about 20% since the announcement Wednesday.

As we noted in our deeper review, the cash and fixed-equity value component of the deal may signal a change in risk aversion on the part of sellers.

Despite the lower headline number of $875 million compared with Curaleaf’s $949 million acquisition of Cura Partners in May, the change in the Curaleaf stock price and the fixed component makes the Grassroots deal more valuable at any stock price. 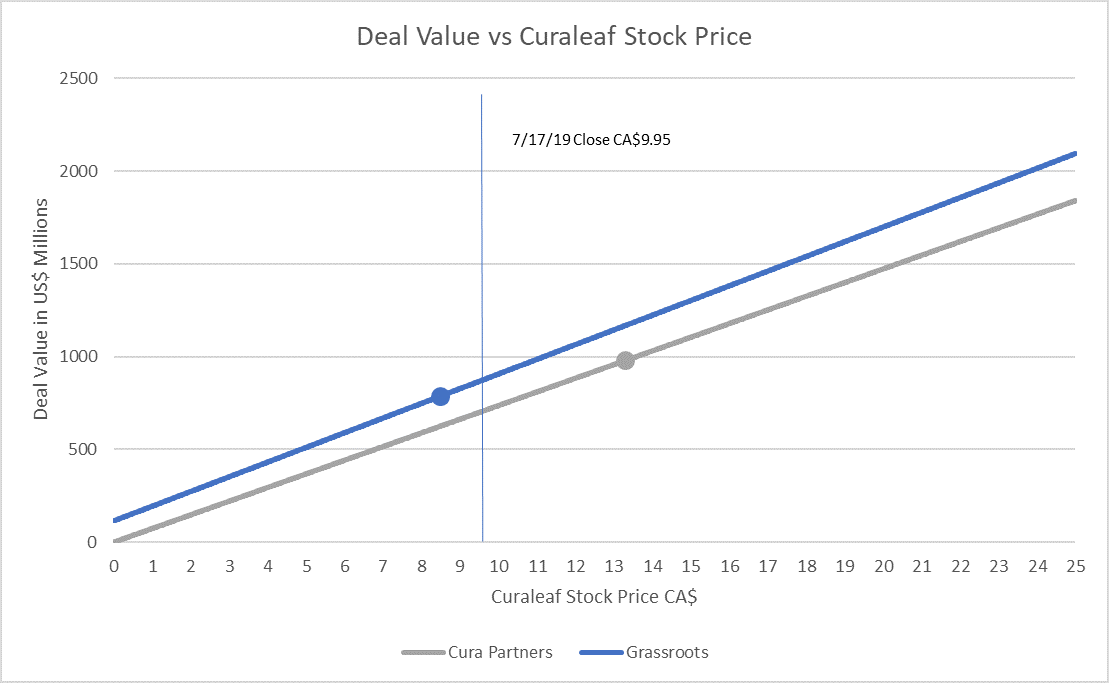 In another headline deal this week, Cresco Capital bought control of Arcview for $7.7 million, bringing both more institutional investment and more investor scrutiny to the cannabis sector.

This is yet another data point of the increasing normalization of the cannabis sector, following launches of coverage in recent months by investment banks such as Merrill Lynch, Jeffries and Stifel.

But not all deals succeeded in moving forward.

Flowr Corp. withdrew its planned CA$125 million equity offering, which would have funded the purchase of the 80% of Holigen that Flowr did not already own.

The stock has dropped 45% since the offering was originally announced June 25, making the equity offering nearly twice as dilutive.

There was no comment on the status of the Holigen purchase, but in an updated prospectus filed on SEDAR, Flowr extended the purchase deadline to July 31.

That means the companies have 12 days to figure out if they can still complete the acquisition or change the structure.

The filing also noted that Flowr would start trading on the Nasdaq one day after pricing the offering; so, with no offering, the listing is up in the air as well.

The market welcomed the pull, as Flowr’s stock rose 21% on Friday.

According to the 2019 Marijuana Business Factbook, only 12% of wholesale cultivators focus on “low cost,” while nearly half of cultivators (46%) compete on “high quality.”

In other industries where pricing is driven by supply and demand, low-cost producers usually have less risk-to-profit margins and are more consistently profitable. Margins can get compressed if that high-quality focus cannot be offset by higher pricing.

Other items curated with you in mind: